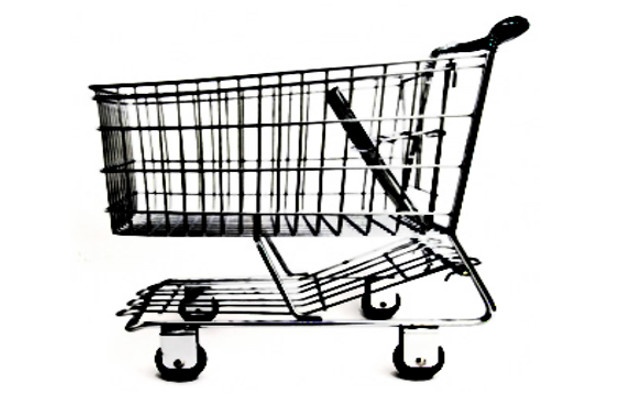 It’s December 26 and across the lands, people are morphing into retail monsters, fighting tooth-and-cart to get their unwanted gifts back to the stores and money back into their filthy paws that were only one day prior an anatomical symbol for giving. Now it’s all about getting things off of them—like that weird lamp Aunt Edna passed off on you, or the cage for the hamster you don’t have. Get money; give back all the junk! Listen to this while you do it.

This new Blink-182 song from their Dogs Eating Dogs EP was made for this playlist. Cue the misery-ridden chorus: “I’m empty like the day after Christmas/Swept beneath the wave of your goodbye/You left me on the day after Christmas/ There’s nothing left to say, and so goodnight.” It’s a great song to weep to as your pushy friends drive you to the mall, forcing you to “therapeutically” rid yourself of the gifts that the ex you’re not over gave you. Meanwhile, you cling to and use said gifts as sob-snot rags. Return those (now snot-slathered) goods. Buy some angry music with the money. Break things. Feel better. [CW]

Okay, so maybe you don't have the right receipt to get the cash back, so you're stuck with a gift card or a credit slip. So why'd ya gotta spend it, like, right now? “Why are you always shopping?” Australian singer/songwriter Marcel Borrack asks. And it's a good question: Why go out in that maddening sea of humanity when you could hang out with your loved ones, or maybe over at a dear friend's place—where I just discovered this song this holiday season? [JP]

When you're stuck in an endless return line, nothing can be more frustrating than people dawdling, not paying attention to the flow of the line and causing even more backups. To them, we say, “Go forward! Move ahead! It's not too late/To return it! Return it good!” Crack that whip on those inattentive morons in front of you and get that gift card. (Then go buy a copy of Freedom Of Choice.) [SH]

Back in 2002, at the age of 15, I picked up Spend The Night. After one listen, I started harboring dreams of starting my own girl band, complete with I-don't-give-a-fuck attitudes and classic-rock guitar riffs. Unfortunately, the only instrument I could play was the clarinet, and all my friends liked country music. My rockstar dreams may have faded, but the Donnas’ fuck-all mentality stuck around. Returning a gift but you forgot your receipt? Tell the cashier, “I don't care.” The time frame to make a return ended two days ago? Shout, “I don't care!” And then, when security escorts you out of the store, try to leave with as much rock 'n' roll swagger as you can and yell, “I don't care!” Brett Anderson and the ladies would be proud. [BM]

The '80s were once universally declared the “Me Decade,” but even then, you had to actually pay for music and movies and you couldn't share your bold, innovative opinions on the stuff you sto—er… acquired. The Flying Lizards appropriated Barrett Strong's 1959 hit and reduced it down to cacaphonic chatter and British upper-class boredom—probably to save money on studio time doing overdubs. Whoever's version you prefer (in a gesture of wry irony, the Pretenders played a great version of it at the Us Festival), this song is 50 years old and the sentiment is just as strong as ever. Just ask the clerks at your favorite big-box store, after putting up up with the great unwashed, gift-deficient tides of humanity. [JP]

FROM FIRST TO LAST – “Failure By Designer Jeans”

This song may actually be about Myspace narcissists (the old Myspace; the song is from 2005), and doesn’t really apply to jean failure at all, but its title pretty much sums up my gift-exchange woes. Yesterday, I received a pair of fabulous pants that would make me feel like a lady Beetlejuice—if I could actually wear them. They’re two sizes too small, and no one wants to see “the ghost with the most” muffintop, babe. I’m convinced that if I were to ask, “Mirror, mirror/How amazing is my figure?” while wearing my undersized gift, the thing would actually turn into a glass human and throw tomatoes at me for my audacity. [CW]

Any sincerity the British pop heroine may have garnered from this song's sentiment evaporated when she lip-synched it at the closing ceremonies of the Olympics while riding in a top-of-the-line sports car. See, it's all about the money, money, money—which is why you'll endanger yourself in the most treacherous post-holiday weather possible to take back unwanted consumer goods. Having said that, enjoy this stripped down version of J rockin' her hit acoustically on British TV. [JP]

This is less a song and more a spoken-word rant littered with curse words and filthy phrases like “I wanna be fucked and then rolled over.” (At least the first minute-and-a-half is. The last bit is the actual singing part, although it's just as trippy. The high point is when Nash starts singing, “I am a midget/I am a midget.”) When it comes time to put on real clothes, leave the comfort of your warm house and drag your ass to Target to return the humidifier your Aunt Rita bought you, turn on “Mansion Song” and listen to Kate Nash shout, “Now get out of bed/Get out of bed/Get out/Get out/Get, get out of bed.” There's no stronger motivator than an angry British chick on a mission. [BM]

Generally, there are two reasons people return anything after Christmas—either out of lack of want or lack of necessity. Silverstein's cover of the straight-edge hardcore anthem “xOn Our Kneesx” (originally by the Swarm) sum these feelings up perfectly, as frontman Shane Told and guest vocalist Liam Cormier of Cancer Bats howl, “I don't want it!” and “I don't need it!” repeatedly for 25 seconds. It's the best motivation for facing snarky customer service workers who demand to know just why you don't want to keep those rainbow-colored toe socks your aunt Joan bought you (that were two sizes too small, natch). [SH]