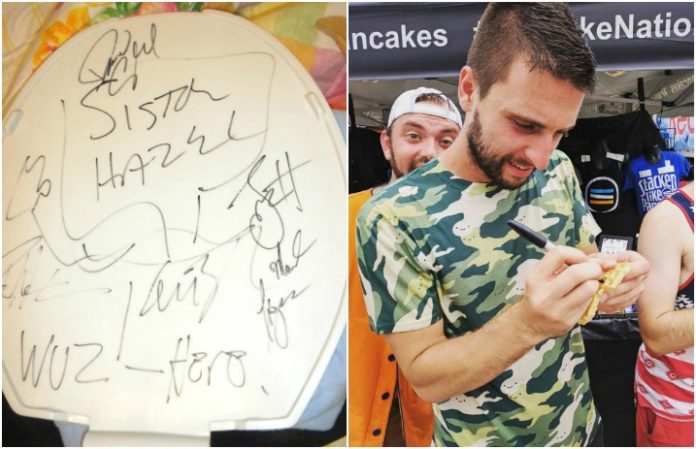 You've waited in line for who knows how long just to get a few precious seconds with you favorite band. Amidst all the nerves and the chaos you forgot to grab something for them to sign. It's happened to almost all of us, but often our best ideas come under the greatest pressure. Sometimes you simply have to work with what you have, or maybe you had this plan from the start? Either way, getting your favorite artists to sign random and obscure items will never NOT be funny.

Check out this list of odd autographed items before heading out to your next meet and greet!

Read more: 14 new songs you need to hear this week

Back in 2014, the band Sister Hazel performed at Wingate University just outside of Charlotte, North Carolina. According to the Ebay seller, the band needed to use the restroom and their apartment was right there. In return for the gracious use of their bathroom, the band was kind enough to sign their toilet seat. Don't worry, upon putting the item up for bidding the Ebay user assured all that it was clean.

Stacked Like Pancakes had an unusual encounter during the Houston date of Vans Warped Tour when they were asked to sign a waffle. Maybe a pancake was too cliche?

they said they were going to frame the waffle

Sometimes you have to work with what you have on you. William Beckett was gracious enough to sign Joanne's receipt, and not just any receipt, we're talking those obnoxiously long CVS receipts that go on for miles and miles.

The popular Cards Against Humanity game seems to be gaining popularity amongst autographed items. Holly had members of You Know The Drill and WSTR sign her cards.

You know those towels that get laid out for the band so they can wipe away the waterfalls of sweat dripping down their faces? Attack Attack! signed one of those for Trenton back in 2010, but I was assured it was a towel that hadn't been used (or had it?).

Starting to get withdrawals from not signing enough pizza ��

YouTuber Jarrod Alonge signed a piece of pizza during his Warped Tour run with Fearless Records last year. Let's be real, this is every pop-punk kids' dream come true.

Sammy Adams announced during his Warped set that he would sign anything, and apparently he meant it. A dad took him up on his offer, asking Adams to sign his nipple. He did.

Jake Marquis of Sleep On It says he autographed a prosthetic leg in Atlanta. You can catch Sleep On It on tour with State Champs right now and ask them to sign all sorts of weird things, because let's be real, they'll definitely do it.

When Alkaline Trio were asked to sign a mummy doll by AP's very own Rabab when she was 16, they had to double check before signing it, stating that “it's like a family heirloom.”

And SO MUCH MORE

Kira Sanford follows the same tactics, having RED sign a paper plate, asking Kenny Logins to sign a piece of wood she found in the street, and getting Steve-O to sign a plastic cup.

What weird and unusual items have you had autographed? Let us know in the comments below!