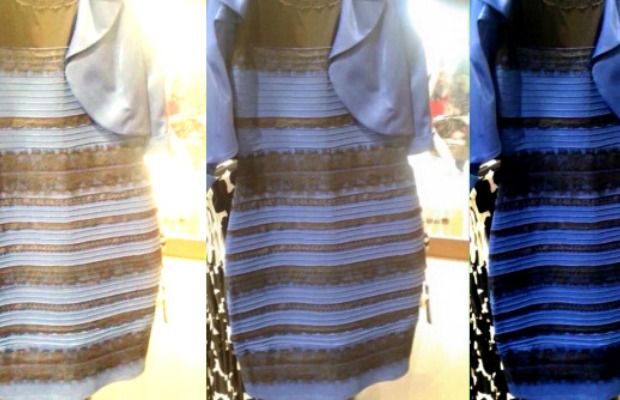 Last night, a poorly lit photograph of a dress completely broke the internet and created a massive schism. The entire world is split over the color of said dress—one side (of completely insane people) sees it as white and gold, while the other sees it as blue and black (what it actually is). It’s worth noting that the AP office is currently in total disagreement, and we have been arguing about it all morning. (Very little work is being accomplished here today, folks.) One editor insists that it’s periwinkle and beige. We've also heard “warm gray” thrown around. In the meantime, we've gathered the thoughts of 16 musicians. Check them out below the photo of the dress.

Kellin Quinn of Sleeping With Sirens:

The dress is tan and pink?

Maybe I need to be more clear.. Fuck the dress.. #whocares #boring

Craig Mabbitt of Escape The Fate

There is no way I'm commenting on the dress (note: this doesn't count as a comment)

John Nolan of Taking Back Sunday:

I wish I could go back in time to an hour ago before this argument about the color of that dress started. Also, it's gold & white.

Wait now it's white and gold.

I'm sick of these games.

Into it. Over it.

It's white and gold. Shut the fuck up.

The god damn dress is tacky.

Whatever color the dress is, it shouldn't be worn.