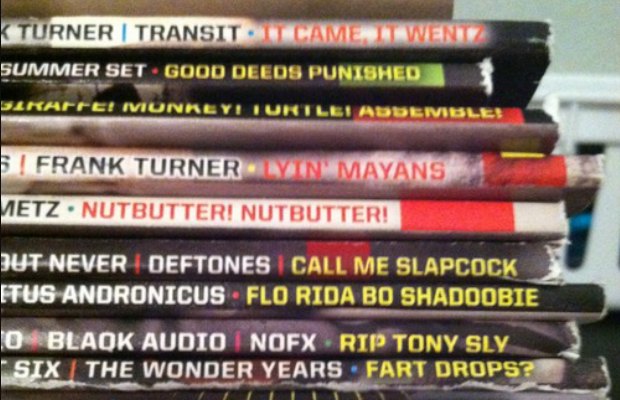 Every issue, we hide a few words on the spine of our magazine as a way to relieve stress, poke fun at someone or just baffle our readership. We call these turns of the phrase “gremlins.” Here are a handful of our more recent ones explained.

NO HYPHEN TALENT (AP 262)
After this editor made a little dig on some rocker's new record on Twitter, said rock star (with two publicists, one indie and one major-label) fired back and claimed said writer was “a no talent hack.” This writer clarified the proper rendering should be “no-talent hack,” as the phrase is modifying the word “hack.” Writer also publicly noted that said rocker would've known that had he not dropped out of high school. Hence, this gremlin is a wind-up for musicians who have no punctuation skills but an innate ability to dumb down their songwriting to appeal to dimbulbs who work at commercial radio. [J[JP]b>

DON'T TOY WITH US (AP 263)
We AP staffers get our fair share of advance music, and a lot of it is digitally watermarked with our name or some other way to trace the audio back to us if it were to leak. Us editorial types are very protective of our advances, but another AP employee wasn't as respectful—he sent a few tracks from Circa Survive's Blue Sky Noise to a friend of his who was a Circa superfan, and who then immediately started teasing other Circa superfans on their message board with 30-second snippets. The label caught wind, found out it was our watermark. We had a remarkably tense few days as we tried to figure out just how the music got out, and who was responsible. After some serious investigation on yours truly's part, the culprit was found, and his friend (whose last name was Toy) was appropriately shut the fuck down. Hence “Don't toy with us.” (And no, the AP employee in question does not work here anymore.) [S[SH]b>

TIM WON'T READ THIS (AP 266)
Pretty self-explanatory: Our former web editor Tim Karan would get so engrossed in feeding the beast that is altpress.com that he would tend to forget that he worked for a company that first and foremost puts out a magazine every month. We used this gremlin to tease him a bit; I'm not sure he ever actually saw it. [S[SH]b>

TEETH SKIN (AP 267)
Two days before the magazine was to be uploaded to the printer, it was decided that this month's cover story (The State Of The Scene) needed a few more interviews to make things even more crystal clear. So it was up to one editor to reach several crucial professionals on the phone almost immediately, interview them, transcribe the sound files, edit it perfectly and give it to the art department to design before the print deadline. All of this was done, as the old cliché goes, by the skin of our teeth. [J[JP]b>

IT'S JUST ONE PERCENT (AP 273)
This issue was one of our annual 100 Bands You Need To Know specials, and the selection meetings for those can get particularly brutal after extended periods of time. This gremlin in particular was born out of a very elongated argument about some band that the editorial team was split down the middle on—half of us wanted them in, and half of us wanted them out. Then Tim Karan said these four magic words: “It's just one percent.” Meaning, the band in question only represented one percent of the entire special, and us editors who had been digging our heels in should let it go. (We did.) [S[SH]b>

CHEETAHS AND GAZELLES (AP 274)
We here at AP are a friendly lot, fairly unpretentious and always up for a good laugh or a feel-good gesture should the moment warrant it. We got an email from a model, who wanted to do something special for her boyfriend's 30th birthday, as said loverman was a big AP fan. “The day we met, he called me a gazelle, and I replied with, ‘Then you're my cheetah.’ So for the last few years, we've been writing that on love notes and naming mix CDs after that,” she wrote. “If you could put ‘Cheetahs and Gazelles’ [s[somewhere in the mag]that would be the best. This man will never forget it, will probably frame it and put it on the wall, and I'll be the best girlfriend ever.” So we did. We never did hear back from her (Emma, how could you?), we don't know if they're still together or if they still read AP. Because of that, we'll never make that kind of gesture again—unless you bribe us with Chipotle gift cards or pre-paid Visas to finance our weekend record-buying excursions. [J[JP]b>

BIT.LY/JOHNSPIN (AP 281)
Former AP Production Director John Millin could be a real sonovabitch sometimes, but we were sad to see him go in 2011 as he took a position at another company in Cleveland. As our final farewell, we made this video mashup of him spinning in his chair with the longtime AP art room fave “Yakety Sax.” Enjoy! [S[SH]b>

WE LOVE PATRICK, TOO (AP 286)
Patrick Stump's “We Liked You Better Fat” blog post was one that will live on for ages. It hit all of us in the AP office very hard, and we wanted to make sure he knew we were still firmly in his corner—no matter what anyone else said about Soul Punk. [S[SH]b>

FART DROPS? (AP 290)
When I started at AP last June, the staff was already in the middle of production for issue 290. However, I did manage to contribute one thing to the September issue, and that was “Fart Drops?” During an editorial meeting, managing editor Scott Heisel said something, but I’ll be damned if I know what it was, because all I heard was “fart drops.” The rest of the editorial staff proceeded to look at me like I was nuts, then laugh at me, then silently wonder if this new girl had undiagnosed Tourette’s. Right after my hearing mishap, Scott suggested (or demanded) I start wearing earplugs to concerts. Lesson learned. [B[BM]b>

FLO RIDA BO SHADOOBIE (AP 292)
As you can tell from my previous gremlin, sometimes things come out of my mouth that make my coworkers do a double take. This wasn’t the result of a hearing mishap, but rather my lack of hip-hop knowledge. My memory is a bit blurry, but we somehow got on the topic of rap (which rarely happens at AP). I was thinking of a rapper, but my brain and mouth weren’t connecting, so “Flo Rida Bo Shadoobie” came out instead. (And no, I wasn’t thinking of Flo Rida. Give me a little credit.) I’m still not sure which rapper I was trying to reference, and at this point it doesn’t even matter. But if anyone ever starts performing under the name Flo Rida Bo Shadoobie, just know you heard it here first. [B[BM]b>

CALL ME SLAPCOCK (AP 293)
As much as I wish I could take credit for “slapcock,” this brilliant gremlin belongs to art director Chris Benton. It came up during a production meeting. I’m not sure what we were discussing, but I believe it had something to do with us running behind schedule on something (which never happens). Ever the fearless leader, Chris said, if all else fails, “we’ll just slapcock it together.” We quickly took a five-minute break to look up “slapcock” on Urban Dictionary. There are three different meanings for “slapcock”—none of which mean “throwing something together in a haphazard manner.” You should really look it up when you have a minute (just not on a school or work computer). [B[BM]b>

When our former web editor was training me for my position, he was also very much into his then-band, which had a song he played ad nauseam in the office we shared. That was fine by me because while the singer repeated, “My father!/My father!” or “Work harder!/Work harder!” and vented through serious subject matter, all I could hear was her aggressively singing, “NUTBUTTER!/NUTBUTTER!” which was like a tiny treat to me every time it hit the pre-chorus. “Ghost” often echoed through the halls after that, and the words we sang were never the correct ones. Sorry, Envoi. My slap-happy hearing doomed you to eternal Nutbutterdom. [C[CW]b>