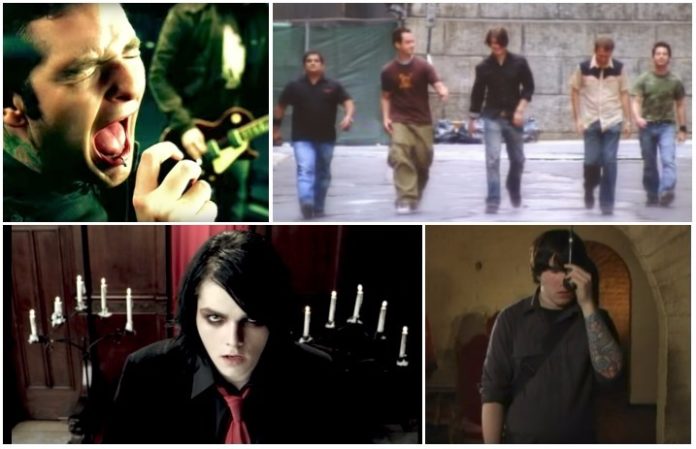 Ahh, emo music: dramatic, poetic and just the right amount of whiny. The often harsh and descriptive lyrics are all too relatable, loved by emo fans everywhere. We rounded up some of the most memorable and heartfelt lyrics from 10 different bands for you and deciphered their meanings. Get ready to sing your heart out!

“So, will you scatter my ashes where they won't be found?/I kept my word when I swore that I would let you down.”

Here, Buddy Nielsen is singing about guilt after a breakup. “Buddy wants his ashes scattered somewhere remote, so no one will bother him and he can be at peace and never hurt anyone again. The ashes could also symbolize the death of the relationship or that Buddy is dead to her so she should get rid of the ashes far away so she can forget about him,” Genius user Mattyboo22 says.

“Yeah, so I'm already dead/On the inside, but I can still pretend/With my memories and photographs/I have learned to love the lie”

This song is about mental illness, something that Justin Pierre does not shy away from singing about. Genius user pbc711 interprets the lyric, saying, “He tries to look past his depression. He has used this coping method so much it’s almost become real to him. He lives off of his memories and nostalgia.”

“I'll carry this piece of you with me/'Cause all I can say tonight is ‘I hate you.’/But it would be all right/If we could see each other sometime”

The song begins with Chris Conley sawing off a piece of his lover’s flesh—beautiful! “The song is in reference to possession. It starts off violent suggesting to cut away part of their skin/body to keep them (the girl) forever. It shows continuing conflict when it references hatred with wanting to see that person again,” Genius user Hillyer clarifies.

7. Fall Out Boy — “Nobody Puts Baby In The Corner”

“So wear me like a locket around your throat/I’ll weigh you down, I’ll watch you choke/You look so good in blue”

Before Fall Out Boy went more mainstream pop, the band had some dark lyrics. The metaphor is explained by Genius user viawentztop, stating, “The ‘locket’ refers to the secret of the affair and her wearing it around her throat is her underestimating he’d ever actually ‘choke’ or hurt her back. Though he’s telling her that she’s wrong, and if she keeps carrying the secret, he’ll ‘weigh’ her down in the past and not let her forget.”

“Is this how it feels/When you don't even fit into your own skin?/And it’s getting tighter/Every day I'm getting smaller”

This song by one of the emo pioneers is about sexuality and a feeling of not belonging. In an interview, Geoff Rickly explained, “It’s about a lot of gender-related things, but especially sort of trying to come to terms with sexuality as not being a terrible thing, and trying to find my own sexual identity. I think that’s a hard thing for anybody.”