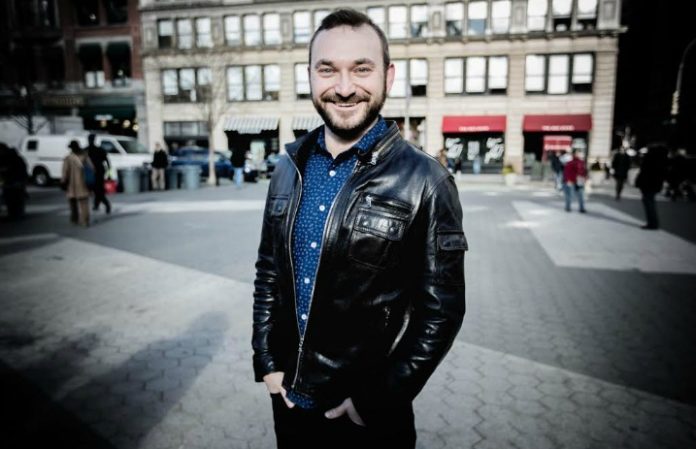 Heath Miller has been at the game a long time: He's a 20-year veteran of the music industry, and he was the person to book My Chemical Romance and Fall Out Boy’s first NYC shows, as well as manage many bands that have now become scene staples. He spoke with AP about getting his start in the New York booking world and what he plans to tackle next.

What’s your main function at Webster Hall?
My title is vice president, but titles are arbitrary. I book shows. The easier explanation is that I run the concert division. I book the shows in the main room. We have another buyer that does the late night DJ stuff, and I have two other buyers that book the shows in the Marlin Room along with me—we definitely work as a team. It’s having the ability to empower my coworkers to do their jobs and then be there when they need me, and not standing in their way or micromanaging.

How was the experience being 17 and booking Dropkick Murphys?
I had my little sister working door and a bigger guy that worked for my dad as my one and only security guard. I was running the show and doing the sound. The Dropkick guys that were in the band in ’99 still remember that show to this day. When I reconnected with them a few years ago, we did a show for them in the Studio here for SiriusXM. They were like, “Wait [snaps], you’re that fucking kid that was like, ‘All right, this is how we’re going to fit 500 people in this little legion hall. [The hall] got a pool table that wasn’t there when I booked it, but I assume people just stand on top of it and it’ll be fine,’” and it was! And we didn’t get shut down. All things considered, it was relatively calm and peaceful. We were the non-proper, super-DIY venue on the tour. You can still Google it and find one or two things written about it. I remember the legion hall wasn’t exactly happy with the show afterward.

If you’re not putting up a touring package, what goes into building a bill?
We have shows where we get to book a local on a touring package, or sometimes it’s just a band that’s touring where we have to fill all the slots. It depends on the type of show. Do I need an opener to draw people at the show or can I book an opener based solely on talent? On a show where it’s going to sell out regardless, I can book an opener [just because] I like them, as opposed to the agent who wants me to find a local that can pull in 20, 50 or 100 people because the show just needs a few extra bodies, or anything because the show is beyond hope, where you just gotta get bodies in the room so the band doesn’t feel embarrassed.

In that respect, how aggressive does the industry get? Are you getting thousands of emails a day from bands?
Between bands, agents and managers, it’s anywhere from probably 300 to 1,500 emails a day; 300 is like a slow Sunday.

Having experience with managing bands, how would you characterize a manager’s role?
The artist isn’t always qualified to make all their business decisions unbiased, because they’re artists. The band should be able to concentrate on writing, performing and the parts of their career that artists should concentrate on. They shouldn’t have to worry about how to rent a bus. One of the best pieces of business advice I’ve ever read: Hire experts and let them be the experts you hired them to be.

That’s a big problem in all businesses, but particularly in the music industry. A lot of people—myself included—started out as super-DIY. Having so many different pieces that we have to handle ourselves because we’re working on a shoestring budget, you can’t hire three people to do this job that should be a three-person job. You learn how to solder wires, you learn how to do sound and you learn how to use Photoshop—that’s hard to shake. You have to realize, “I can do this myself, but this person will do it so much better than me and I should let them do it.” It’s a big growth process.

As far as managing bands versus talent buying, what made you make the transition? Do you still manage bands at all?
I don’t manage bands anymore. The first band I ever managed was a band called Random Task that never went very far. Evan [Winiker] now works in the industry and ended up being in Steel Train, which was [Bleachers founder] Jack Antonoff’s second or third band. I got friendly with the guys from Senses Fail. I was trying to help them get a manager and it was, “Hey, instead of us getting the manager that you’re trying to help us get, can you just manage us?” I thought I kind of knew what I was doing, so I gave it a shot; that’s how a lot of people in this business start. I was probably 20 or 21. I was young then—I was either just about old enough to buy beer or wasn’t yet.

Now Senses Fail are coming back on their 15-year anniversary tour in March.
We’ve had a bunch of Senses Fail shows. From there, I managed Boys Night Out and Halifax. The world was changing the way people consume and discover music, and when I stopped managing Halifax, it came to a point that I didn’t know how to get their career to the next level. And they were having some internal changes; the singer was thinking about leaving and I always promised if he weren’t in it, I wouldn’t manage the band. I split with them on friendly terms. Their next manager was this guy who, at the time, only really previously managed metal bands. Now he’s one of the managers on this developing act called Kanye West.

What pushed you toward promoting?
The big difference with management versus booking a concert is if you book a concert and it’s making money, it makes money at the end of the concert. If you’re booking a concert and it’s losing money, you lose money at the end, and if it breaks even, it breaks at the end. If you’re the manager, you usually don’t lose money managing the band, but you don’t always make money or a livable wage. That’s part of the reason why I always booked shows and managed bands at the same time. It also gave me that ability, when the band was barely making money, just to waive commissions. I wouldn’t take it so they can get home and actually have money to pay their rent or have dinner.

What’s the biggest difference in the industry from when you first started to now?
The internet. Back then, it was harder to get your music out to the world without having a label. PureVolume and MP3.com, then Myspace were the first three that made it easy to get your music out. Now, if I wrote a song today, record it at my friend’s place that has Pro Tools—or I’m a DJ and I just did it on my computer—tomorrow I can get it up on YouTube, SoundCloud or Spotify without too much difficulty through TuneCore. As opposed to having to have a label that would get it past gatekeepers and onto the radio. Very few people who live in New York actually listen to traditional radio anymore. It’s exciting though: You don’t need some guy in a golden tower, so to speak, being like, “This is commercial and good enough for you to hear.” That was one of the big reasons punk started as just mixtapes and ’zines and people making their own 7-inches and bootstrapping before bootstrapping was a term, from money they made babysitting or mowing lawns.

After having such an impressive career, where would you like to see this go in the future?
I definitely want to grow what we’re doing in Webster, both in types of shows and quantity of shows, finding more ways we can improve our business to the customer, to the artist and even financially. We’re in New York and it’s an expensive place to have a business; rent is huge here. Then insurance and all these other costs that are a lot smaller in other markets or a lot smaller in other businesses. Concert insurance is more expensive than your average businesses because of things that could and do happen. Having someone slip and fall because they drank too much doesn’t really happen at a barbershop. alt