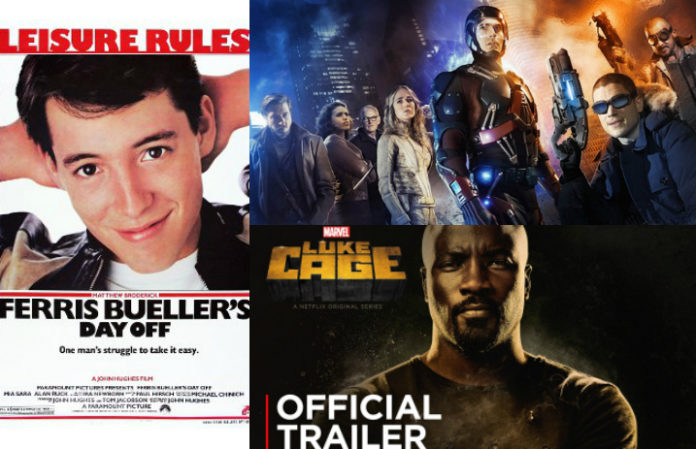 Netflix is once again shuffling their lineup next month! Here are some of the best additions to look out for.

Welcome back to Netflix, Marvel; we’ve missed you so much. Luke Cage finally gets his chance to join the ranks of Jessica Jones and Daredevil in his 13-episode battle for the heart of Harlem. So far, Marvel is three for three in terms of quality for their Netflix shows, and executive producer Cheo Hodari Coker gave us a reason to believe that they’re about to go four for four at San Diego Comic Con when he said, “When I think about what’s going on in the world right now, the world is ready for a bulletproof black man.”

Hilary Duff left the spotlight so gracefully and quietly that there may still be people who think she’s preparing for season three of Lizzie McGuire. As unquestionably amazing as that would be, at the very least we get the chance to enjoy one of the best retellings of this classic tale when A Cinderella Story hits Netflix in October.

It’s only right for one of the best movies set in Chicago to make its way into our living room the same year that the Cubs are ready to make a run through the playoffs. October could be a tragic or triumphant month for the city, but at the very least you can dance along to the iconic “Twist & Shout” parade scene.

Ava DuVernay, the director of the critically undervalued (a single Oscar win for Common and John Legend’s heart wrenching song “Glory”) yet culturally revered Selma, makes her return with this Netflix exclusive.

The documentary looks to be a brutal look at the mass criminalization of African Americans in the United States prison system. The trailer also features cameos from both major party presidential nominees in this year’s election.

Not only does this release signal the end of JT’s two year-long tour, it signals that he may be ready to begin his next album. Yes, he has a potentially adorable movie coming out in November that has a fantastic and aggressively catchy song to push the marketing along, but you’re clearly lying if you won’t admit that you’re ready for his next chart-topping album. Also, who doesn’t love a Las Vegas-caliber live show?

Do you have cable? If so, for the love of God, don’t spoil this show for the rest of us. CW managed to put together an ensemble of villains (plus a few heroes) months before Suicide Squad and its unbelievable marketing budget hit the big screen, and now it’s time for cord-cutters to get their chance to see the next iteration of DC’s TV universe. Coming along with it is The Flash season 2 and Arrow season 4—again, majestic owners of cable, please don’t spoil these shows for the rest of us.