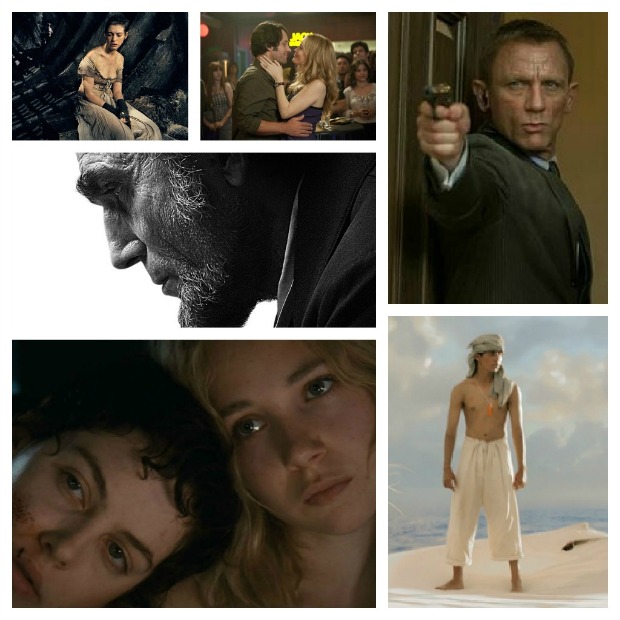 It’s no secret that your fearless leaders on AP’s editorial staff have a plethora of opinions on the music you should be listening to. But we’ve also got a few thoughts on the movies you should be watching for the rest of 2012, including a tale about a hobbit, singing Frenchmen and seven dudes you don’t want to fuck with. You’re probably asking yourself, “What does this have to do with music?” Nothing at all, and that’s why we’re doing it.

Django Unchained
Opens nationwide December 25
With credits that include Pulp Fiction, the Kill Bill series and Inglorious Basterds, few movie nuts don’t anticipate a new movie from Quentin Tarantino, and Django Unchained is no different. The plot follows a freed slave and a dentist-turned-bounty hunter as they seek out a ruthless gang called the Brittle Brothers. With names like Leonardo DiCaprio, Jamie Foxx and Samuel L. Jackson on the bill, the spaghetti western is sure to twist and turn with Tarantino’s signature use of sharp dialogue and well-placed violence. [MC]

The Hobbit: An Unexpected Journey
Opens nationwide December 14
While it may be three more years until we have the full story of The Hobbit on film just like Lord Of The Rings, getting the first chapters of the classic fantasy novel on the big screen with Peter Jackson at the helm again is nothing short of a visual treat. With Martin Freeman taking the role of Bilbo Baggins, the hobbit’s journey begins as he seeks to reclaim the Dwarf Kingdom of Erebor from the dragon Smaug. Anyone familiar with the Rings series—and Jackson’s stellar use of special effects—should be excited to see how the world of Middle Earth is rendered and the story is interpreted. [MC]

Jack and Diane
Opens nationwide November 2
Don’t be confused by the title. Jack and Diane is certainly not about John Mellencamp’s teenage duo. It is, however, about a pair of teenagers, but with this twosome, there are no chili dogs in sight, if you catch the drift. In the film, Jack and Diane, two teenage girls, meet in New York City, get intimate and fall in love. Sweet Diane (played by Juno Temple) softens the heart of tough-skinned Jack (played by Riley Keough), but the trouble comes when Jack finds out Diane is moving away. It’s your typical teen love story, but with a nice little lesbian twist. Oh yeah, something about Diane’s newly awakened sexual desire causes her to have werewolf-like visions. Should be interesting. [BH]

Les Miserables
Opens nationwide December 25
If you can handle the whole musical thing, Les Miserables is a must-see. Originally a French historical-fiction novel written by Victor Hugo in 1862, Les Miserables was later made into a hugely successful stage musical and now a feature film with an all-star cast including Anne Hathaway, Hugh Jackman, Amanda Seyfried, Russel Crowe and Helena Bonham Carter. Don’t let the “history” part turn you off, though. This looks as cool, if not cooler, than any drama set in the present day. The movie follows a number of relationships between several characters (including Hathaway, who shaves her head at one point in the film), but it’s mainly focused around the struggles of an ex-convict played by Jackman. Shaved heads and convicts; sounds pretty punk, right? [BH]

Life Of Pi
Opens nationwide November 21
When I learned that the beloved young-adult novel, Life Of Pi was going to be made into a movie, I was a tad worried. The book’s author, Yann Martel, crafted a beautiful, imaginative story about a boy named Pi Patel and his 227-day journey lost at sea on a sailboat with a Bengal tiger named Richard Parker. It doesn’t sound like an enthralling movie plot, but then again, Life Of Pi isn’t what it seems. In its simplest form, it’s about a boy, a tiger and a boat. But it’s also about survival, faith and the extraordinary resilience people are capable of when life demands it. Come to think of it, that sounds exactly like the kind of movie I want to watch. [BM]