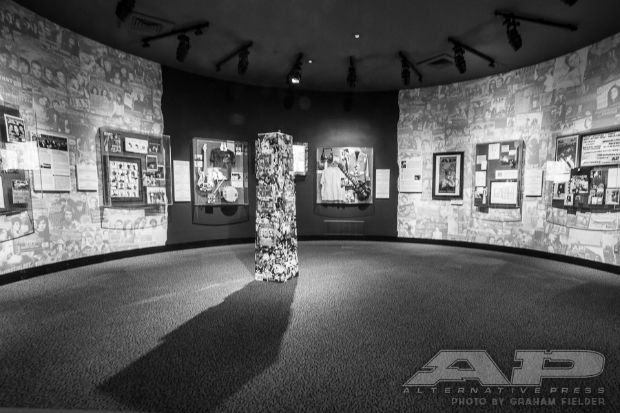 Today, there is a magazine cover on display at the Rock And Roll Hall Of Fame, an early mock-up of the APMAs issue starring All Time Low’s Alex Gaskarth and Jack Barakat. The cover shot is lined with editorial notes, yellow Post-its and red ink. Behind the glass, under the cover shot and various annotations, there are names.

There is mine, the company newbie with an occasional penchant for overzealous copyediting. Cassie Whitt, the MCR-my general who de-stigmatized fangirl culture and had always wanted to work at AP since she was a pre-teen. Rob Ortenzi, industrial devotee and goofball web guru, who spins his own music on the side. Dawn Marshman, the marketing director that juggles eight phone calls and three thousand emails with nothing but tofu for fuel. There are the remaining founding fathers: Jason Pettigrew, who went from being a surly record store employee from Greensburg, Pennsylvania, to representing the editorial department. Christopher Benton, design aficionado and purveyor of culinary goodness, created the iconic AP logo that still brands each cover as our own.

And there is Mike Shea, the magazine’s CEO and founder who stood behind a podium in a Rock Hall exhibit area, about to introduce an exhibit honoring the magazine he started as a 19-year-old in his bedroom 30 years ago, when he first turned a dream into something he could hold.

Last night, Never Give Up: Alternative Press At 30 opened at the Rock And Roll Hall Of Fame in Cleveland, Ohio, three decades since Shea first pasted up pages chronicling the punk scene no major music magazine would cover. Items on display included the first wooden desk he used to assemble AP—at that point, as a broadsheet format on newsprint that was distributed for free at local punk shows. Scratched lines left by Xacto knife blades are still visible on the desk’s surface. There’s also Panic! At The Disco frontman Brendon Urie’s gold jacket from 2014’s inaugural APMAs. There’s Pettigrew’s notebook from his notorious 1990 tour with industrial-rock outfit Revolting Cocks. There’s a 1999 Warped Tour program; illustrations by Rob Zombie that were used as a record-review rating guide; personal correspondence from Henry Rollins; a promotional condom from Nine Inch Nails; and a subscription request from Spin magazine founder Bob Guccione Jr.

This is the flotsam and jetsam collected after 30 years of publishing. But the treasures are those names—ours, the countless writers, editors, designers and photographers that have come and gone, the bands whose faces now line our office walls. And the readers—more than all of these, those are the names that count the most. AP has always been about community, finding families where you didn’t know they could exist, from the crowds at your local venue or in the bands that fill your iPod. True, this is an individual’s story, but it’s more about the tale of a family, a group bonded together by a paper-and-ink totem, a thing to gather around. We are our own community here at AP, with many editors, writers and musicians who have come and gone lining our extended ancestry. We serve a larger community, a voice for a culture we are proud to watch grow and evolve.

The magazine could just be paper, a collection of pages and loud opinions. What made it more was community—that family—which defines itself by the lines in a song, the moments forged alone in a room, when your best friend is the voice on the stereo. AP’s story is all of ours. It's one for writers and rock stars and fringe kids whose first ally existed in the pages of a magazine. It's a testament to a gauntlet we all run, a parcel of teenage years when we don't know who we are beyond the identity the music bolstered us with, inspired us to earn, and let us choose what we wanted to take and to leave.

Without that community, AP At 30 means nothing. The exhibit—a collection of paper and a scratched desk, framed guitar picks and cobbled notes—is tangible, but empty. But it’s those names that make AP breathe, giving it both a home and a mission to carry forward.

Thirty years is a long time. But we still have more names to add. Alt

Never Give Up: Alternative Press Magazine At 30 runs from now until January 2016 at the Rock And Roll Hall Of Fame And Museum.