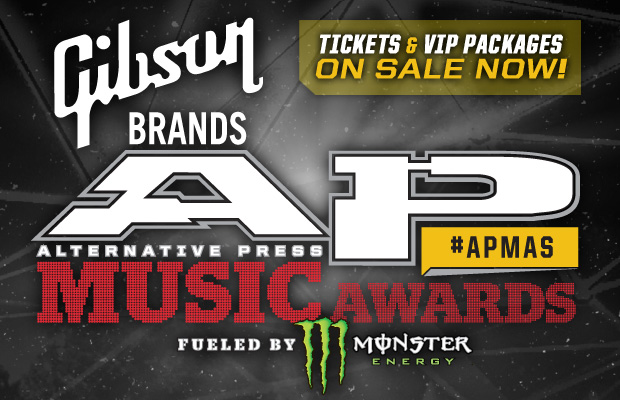 With the inaugural AP Music Awards taking place July 21, 2014 (get your tickets now), at the Rock And Roll Hall Of Fame And Museum at North Coast Harbor, we thought we would use the weeks leading up to the historic event to give you a category-by-category breakdown of the nominees so you can be an informed voter. Read on to learn about the Best Vocalist nominees, and cast your vote at altpress.com/apmas!

Within a scene that favors tenors, Black Veil Brides vocalist Andy Biersack’s powerful bass stands out, working in stark juxtaposition to the often squealing guitars surrounding them them. Biersack’s voice becomes and immediate focal point as many don’t expect such a gruff sound to come from him. The first reaction most people have to BVB is surprise at his unique register.

I distinctly remember when Vic Fuentes came to our office with Jenna McDougall from Tonight Alive to perform “Hold On Till May.” His warm-up excercise alone echoing in our kitchen was captivating. Fuentes is the polar opposite of Biersack, with his high range that trembles with his signature razor-sharp and pleasantly unpredictable edge.

Like Fuentes, Quinn’s range nears stratospheric levels. With his sweet tone and frequently employed melisma, the Sleeping With Sirens frontman could be described as our scene’s equivalent of a Mariah Carey. The best part is, perhaps, that he has a great sense of humor about his talent, as evidenced by this hilarious video where he shows off his falsetto.

Oli Sykes (Bring Me The Horizon)

From the deepest of guttural growls to his current, more melodic shout-screaming style, Oli Sykes has made his voice an instrument both adaptable to style and circumstance, proving that he is not only flexible as a musician, but forward-thinking and unafraid to change, no matter what fans or critics have to say about it.

Brendon Urie (Panic! At The Disco)

When Panic! At The Disco were last in Cleveland, Urie was ill to the point that he had practically lost his voice. Nonetheless, the show went on, almost without flaw on his part, with a few uncalled-for, sky-high hair-metal-style screams thrown in for good measure. Most impressive about Urie’s voice is that his range is massive. Look no further than the progression of “This Is Gospel,” which starts low and raises to a high tenor by the chorus, as proof. Oh, and there’s this.

Over the past couple years, we’ve watched Paramore perform live time after time on our TV sets, including instances where Williams has been an example to strive toward on singing competitions. And for good reason: her voice is unfaltering gold live, even with strenuous onstage movements. Her effortless clarity has been often imitated since the dawn of Paramore’s success, and has inspired countless young musicians to pick up mics of their own.