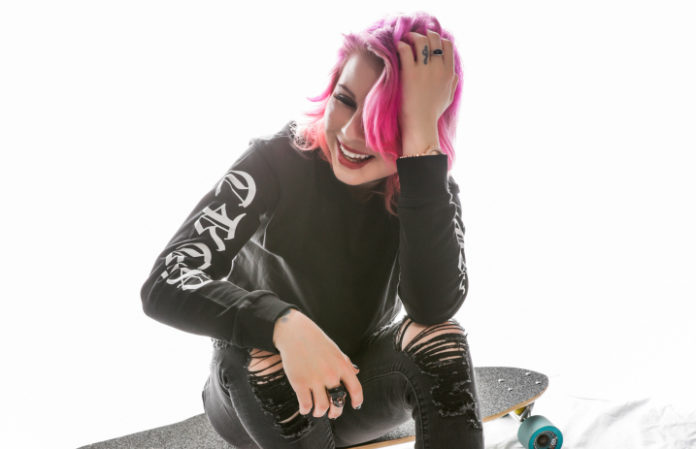 Philadelphia-based hip-hop artist Whitney Peyton has signed to Tragic Hero records, and with that announcement, has released a rock edition of her hit song, ”Woopty Woo Woo”—which just so happens to have been produced by From First To Last’s Matt Good and Asking Alexandria’s Ben Bruce.

“I've never been one to limit myself to a certain style so when it was presented to me that Matt Good (of From First To Last) and Ben Bruce (of Asking Alexandria) wanted to remix my song “Woopty Woo Woo” (which was initially one of my quirky, sarcastic hip hop tracks) into a rock/nu-metal sounding song, I was intrigued!” Whitney Peyton explains.

“The boys created the new instrumental and I made my lyrics and vocals a little more in your face than before. I never imagined we would go on to make a music video that would feature cameos from Zack Hansen (The Word Alive), Matt Good (From First To Last), Ryan Daminson (Amor), and Matt Traynor (Blessthefall) shot by Marcus Eden.”

Ben Bruce is on point when he explains that “this is a modern day rap rock monster bringing back the heavy hitting style of limp Bizkit and RATM with a modern twist.”

And, in case you were wondering, Peyton says that it was a blast to film—no ego on set at all.

“Despite all of their accomplishments there was no ego on set, the guys were all super chill and there to have a good time. ‘Woopty Woo Woo’ is supposed to be silly at face-value, but has some real underlying messages poking fun at politics, reality shows, and society standards.”

Matt Good warns: “Good luck getting that hook out of your head ever again”—and we have to agree. Listen to “Woopty Woo Woo” (rock version) below:

And she explains that her signing to Tragic Hero might come as a surprise to some people, but it’s their homegrown attitude that makes it the perfect fit.

“I’ve released several projects, music videos, and toured nationally multiple times as an unsigned act so I told myself that if I ever signed with a label they would need to match my work ethic and really see my vision. You hear horror stories from fellow artists all the time about signing with a company that ends up taking away their creative freedom or trying to steer them in a different direction than artists see for themselves,” Peyton explains.

“I think the announcement of me signing with Tragic Hero Records will come as a surprise to many people being that they are known as a rock/metal label and I'm from the spoken-word/rap world, however their homegrown attitude and motivated staff makes us a nice fit in so many ways. Tragic Hero is made up of really excited and hungry individuals that root for the ‘underdog’ which is something I've always represented and never wanted to abandon. My new projects are still hip hop, but will take on a more modern evolved sound as I develop as an artist.  I'm really excited the label saw something in me that made them want me on the team and I can't wait to show everyone the magic we're creating together!”

You can purchase Peyton’s upcoming Pyro Edition of Firecracker here.

And see her full list of tour dates below:

What are your thoughts on Whitney Peyton’s reworked version of “Woopty Woo Woo”? Let us know in the comments below!