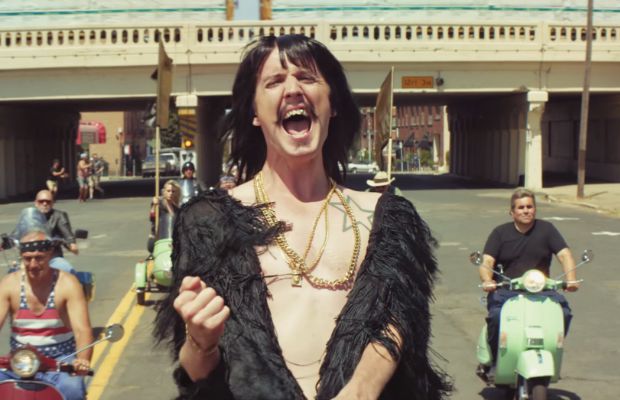 Grammy-award-winning rapper Macklemore and his production partner Ryan Lewis reemerged this month with “Downtown,” the lead single from their forthcoming follow-up to 2012’s surprise smash hit, The Heist. By now, you’ve probably seen the weird, epic video for the track, or perhaps you caught Macklemore and co. performing it live in recent weeks at the VMAs or on The Tonight Show. If so, you might have been left wondering “Who is that guy riding the eagle chariot pulled by motorcycles, sneaking that full-on rock ‘n’ roll hook into a mainstream radio song, and where can I find out more about him?” Don’t worry gang, we’re here to help.

That mustachioed man with the acrobatic moves and powerful pipes would be Eric Nally, and, if he looks familiar, it’s because he formerly fronted Cincinnati rock group Foxy Shazam. Nally appears along with hip-hop legends Melle Mel, Kool Moe Dee and Grandmaster Caz on the genre-bending “Downtown,” which, in the weeks since its release, has been cruising up the charts. Love it or hate it, people can’t stop talking about it, and Nally is a big part of what makes the song so unique. Below, you’ll find 10 things you need to know to get up to speed on Eric Nally.

He spent a decade in Foxy Shazam.

Foxy Shazam went through many different phases over the course of 10 years and five albums, and really allowed Nally to flex his range as a versatile frontman and larger-than-life performer. From their earliest, heaviest days of their self-released debut The Flamingo Trigger (2005), to the more evolved, alternative, Casey Bates-helmed Introducing Foxy Shazam (2007), to their slick, self-titled major label effort in 2010 under the guidance of super-producer John Feldmann, Foxy constantly proved adept at tackling most any style they set their mind to, all the while morphing into a powerhouse live band, logging miles on the road. By 2012, the group fully indulged in their most glam-rock tendencies, crafting The Church Of Rock And Roll with the help of Justin Hawkins (The Darkness), only to pull a total 180 with their final album, Gonzo, a deconstructionist return to straightforward songwriting, released last year, tracked live (and in running order) by famed producer Steve Albini. Shortly after Gonzo, Foxy split, and the band’s future currently remains uncertain.

Macklemore and Ryan Lewis handpicked him for the track.

According to a recent interview, Nally’s involvement in “Downtown” happened purely by accident. Not only is Ryan Lewis apparently a Foxy fan, but Macklemore trumpet player Josh “Budo” Karp had played shows with the band in the past. When a singer was needed to nail that soon-to-be-famous hook to tie the single together, Nally’s name came up. A cold call and perfect timing led to a recording session in Seattle, and, as soon as the track was selected to be the single, Eric naturally found himself a part of the music video and subsequent televised performances. A whirlwind sequence of events to be sure, but one Nally spent the better part of a decade warming up for.

The video for “Downtown” is a lot less weird than some of Foxy’s.

The “Downtown” music video boasts a West Side Story-esque turf war; a chariot pulled by motorcycles; a bike decked out in moose taxidermy; some especially funky dance moves; Macklemore riding piggy back on a very tall biker; and a surreal mix of ‘70s and ‘80s style. Pretty hard to top, right? Wrong. Foxy Shazam had been exploring weird, creative territory with their videos for years now, and some of them make Macklemore’s new effort seem downright ordinary. Our faves include “The Church Of Rock And Roll,” in which Nally rides into a church on a motorcycle, sits on a throne flanked by models firing machine guns and drinks Red Bull from a chalice.

Then there’s “Unstoppable;” a stylish, disorienting exploration in practical effects and puppeteering.

We highly recommend falling down the YouTube rabbit hole for the rest.

Nally has always had those sweet, acrobatic stage moves.

From day one, Foxy Shazam made sure to make their live show an unforgettable experience. Nally is known for delivering weird, surreal banter, climbing around rafters, diving from high risers, jumping on bandmates’ shoulders, doing flips, dismantling mics, playing air basketball, and, of course, for displaying inhuman flexibility, which aids in some pretty sweet dancing and stage moves. Just don’t ask us to explain the physics of how he pulls off those sudden drops to the ground in jeans.

Also, he used to eat cigarettes.

Yes, eat. Real ones. Every single night. Let’s hope the Foxy hiatus means Marlboros are finally off the menu for awhile.

The VMAs were not his first award show performance.

While his high-profile MTV outing was likely much of the world’s introduction to Eric Nally, Foxy Shazam were actually no stranger to award shows. In 2012, during their Church Of Rock And Roll era, the group served as the house band for Spike’s Guys’ Choice Awards. Though they didn’t get a ton of airtime, the band performed throughout the entire show and during commercials.

During Foxy’s run, Nally shared the stage with countless big names. From Slash to Courtney Love to the Darkness, the road-worn band also found themselves on tour with Panic! At The Disco, fun., Circa Survive, Senses Fail, Patrick Stump, Anberlin, the Young Veins, Masked Intruder and many more. Foxy even played Warped Tour in 2011.

…and has written songs with some, too.

Though his songwriting credits aren’t as expansive as his tour history, Nally has also been tapped to bring his offbeat, rocked-out writing sensibilities to the aid of other artists in recent years. While “Downtown” was largely finished before Nally arrived, that chorus is all his doing (obvious to anyone familiar with his sound), and among his other co-writes, the biggest name whose Nally-penned tracks made it to release is musical legend Meat Loaf. Here they are hanging out in a kitchen.

There’s going to be an Eric Nally solo album.

“Downtown” couldn’t have come at a better time for the former Foxy singer. He has already been hard at work crafting songs for his first solo release, and took this recent surge of exposure as an opportunity to launch a new website and social media accounts. All we know about the record is that it’s set to feature some very special guests, but what it will sound like is anyone’s guess-. Nally is a musical chameleon and never makes the same album twice. According to Nally’s Instagram, we might not have to wait too long to find out more: “The dawn of me is on the rise. Big things are coming.”

Look out on the horizon, the dawn of me is on the rise. Big things are coming ericnally.com downtownthesong.com #ericnally ��cred by the lovely @jessefoxart

His bandmates have also moved on to new things.

With Foxy Shazam on indefinite hiatus, Eric Nally isn’t the only member who’s forging a new path. Trumpet player/vocalist Alex Nauth has teamed up with longtime Foxy cohorts Cadaver Dogs for a new band called the Skulx, who will release their debut album this year. Sky White, Foxy’s keyboardist—best known for crowdsurfing his piano and, in the early days, performing with deer legs—has really taken a new direction, launching a premium tea company. The rest of the band are still active in their respective scenes, as well. Though we’d love to see Foxy benefitting from Nally’s newfound attention, especially since they were criminally underrated in their time, we still hope that somehow, someday, the guys will reconvene to entertain us once more. Rock ‘n’ roll needs them.