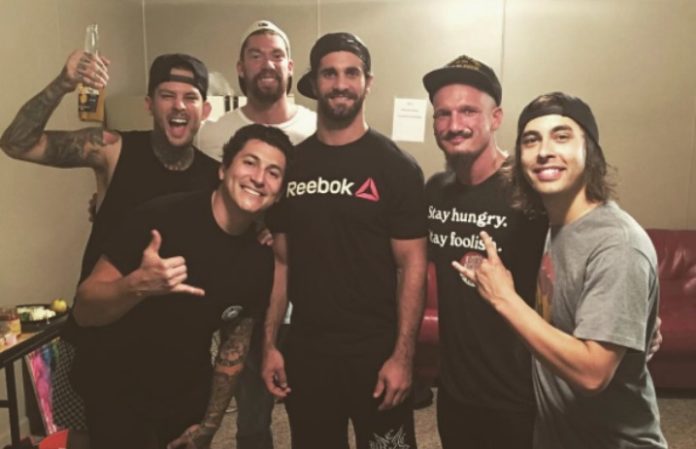 Social media gives a new inside look at the lives of our favorite artists. Whether it’s Snapchat, Twitter or Instagram, we get to see a daily snippet of how their time is spent on the road, writing, recording or just goofing off. Lately, I’ve been seeing professional wrestlers pop up all over my newsfeed (and not just from following wrestlers). How did these bands become friends with them? Most importantly, why did all of these bands suddenly fall in love with wrestling?

As a ’90s kid, I grew up during a magical time of professional wrestling called “The Attitude Era.” Even if you’re not a fan of sports entertainment, I’m assuming you’ve heard of the highest paid actor in the world, Dwayne “The Rock” Johnson? Maybe Stone Cold Steve Austin? That era spawned a lot of icons that surpassed folding chair enthusiasts and made pro wrestling mainstream. It also seems like for a decade or so, a lot of us completely grew out of watching every Monday night. We “grew up”—and I use that term loosely.

So what made these bands care about wrestling again? One man seems to be the epicenter of the wrestling fan resurgence, especially in the music scene. His name is CM Punk. A straight-edge wrestler who wore Rancid, H2O and Against Me! shirts on a regular basis. He had tattoos (not tribal, for once) and was seen onstage or in the pit at punk shows all over. He was one of us. He was real.

This new accessible and relatable character started turning heads and blurring lines in the scripted sports entertainment world as well as the music scene. Suddenly bands had someone to root for like they were kids again. Staying over at strangers’ houses watching Monday Night Raw on tour or streaming the WWE Network from the merch table at shows became a common occurrence. As it spread, band members (with the help of a little blue check mark next to their Twitter handle) were able to access their favorite performers on social media and started to become friends. For instance, my band the Swellers had a brief friendship with the bizarre and legendary Goldust. We sent him a care package of shirts and he sent each of our band members autographed copies of his new book. Wrestlers got bands into their shows and vice versa.

In addition to little perks like that, the music community does have a big part in the success of wrestlers. The more hype performers get, the more the company wants to push them into the spotlight. Having bands like Pierce The Veil, PVRIS, Stick To Your Guns and State Champs showing up in former WWE Champion Seth Rollins’ posts is a big deal. They have each other’s backs and it is oddly mutually beneficial. It adds a coolness and relatable factor to the wrestler while giving bands star power and visibility.

Big thanks to @thisispvris for always being cool and hanging. Also, very appropriate that they did the theme for #extremerules! ���� @mattyal4w

What was once simply a hobby for artists is now a business opportunity. Labels and publishing companies work with the big wrestling superpowers to get music for their pay per views (Young Guns, Knuckle Puck) as well as wrestling entrance themes (Story Of The Year, Killswitch Engage). Wrestlers have even premiered new songs from bands via their social media. Very recently, Billy Corgan of the Smashing Pumpkins (a longtime wrestling fan) became the president of TNA Wrestling.

Your favorite bands like wrestling because it’s fun to watch, it’s no longer a guilty pleasure and thanks to the internet, it can actually benefit them in the long run. The overlap of music and sports entertainment fans is much bigger than you would think and cross promotion—whether intentional or not—is the final suplex through the table we’ve all been waiting for.