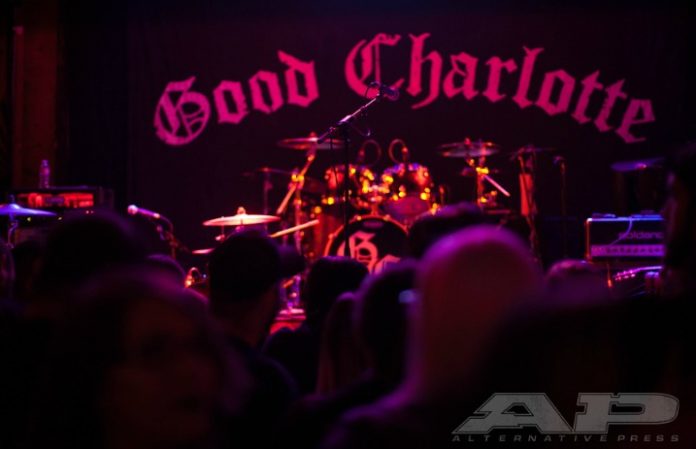 Okay, so first thing’s first: You shouldn’t take the title of this article too seriously, because obviously the Good Charlotte reunion matters.

How could it not? Tickets for their first show back—which happened last night at the Troubadour in Los Angeles—sold out in literally less than a minute. If you're going to believe what frontman Joel Madden had to say onstage (and really, I’m not sure why you wouldn’t) it actually sold out in less than 10 seconds. Then, there was the moment before Good Charlotte took the stage at the Troubadour, to so much jet-turbine screaming that it could have been a One Direction concert; only the crowd was made up of everyone from 16-year-old girls to to twentysomething hipsters to 35-year-old men. This is clearly a band that people—lots of different kinds of people—still care a great deal about.

So of course, when they announced their reunion earlier this month it mattered. But to truly understand what made it special, you first have to consider the near 20-year history that led up to it. Back in the early ’00s, like many at AP, I occasionally crossed paths with Joel and his brother Benji as their band began their incredible mainstream ascension. For me, it was amazing to see them go from misfit kids from suburban Maryland to fronting arguably the most popular punk band in the world. That sounds bold to say now, but it’s true: Between the years 2002 and 2004 calling Good Charlotte “the most popular punk band in the world” wasn’t an idle boast. It was a straight-up fact.

This is a band who sold almost five million albums in that brief time. Not five million streams or video views, mind you: Five million people actually bought a thing with their name on it that played music. Their two most commercially successful records, 2002’s The Young And The Hopeless and 2004’s The Chronicles Of Life And Death, produced nine radio singles. Seriously, nine. They became pin-ups in tawdry teen mags and were given their own show on MTV. But perhaps most important of all, they became heroes to millions of teenagers who, just like the narrator of any truly great Good Charlotte song, felt like no one out there really understood them.

During their spectacular early ’00s rise, I remember somehow telling Benji and Joel that I felt like Good Charlotte had become the present day version of the Ramones. This being the early ’00s, I believe this claim came through a text from their brother Josh, who is a friend. (I think a SideKick 2 was involved.) But whatever the case, it really did feel like an apt comparison: Good Charlotte also had a very distinctive look (liberty spikes, mascara, Dickies with a sag) and lyrically, a song like “Little Things” wasn’t really that far away from, say, a song like “Teenage Lobotomy.” Also, like the Ramones, it seemed like they might end up writing their own brand of same simple-but-brilliant pop songs forever.

But what happened in the years that followed their breakout success seemed to defy that very idea. Starting with The Chronicles Of Life And Death, Good Charlotte began expanding their sound, first with goth and arena-rock flourishes. Then they released 2007’s incredibly underrated Good Morning Revival. When they played that album's lead single “The River” at the Troubadour, it surprisingly elicited one of the biggest sing-alongs of the night. (To be clear, “The River” is a steely alt-metal song that, on its recorded version, features M. Shadows from Avenged Sevenfold singing about how Hollywood Boulevard has the power to bring people back from the dead. Pop punk, it ain’t.)

But alas, “The River” was just one of the many risks that Good Charlotte took later in their career and like many of their songs from that time, it proved how ahead of the curve this band could be. Think about it: Had Good Charlotte not collaborated with Shadows, would their obvious pop-punk descendants in All Time Low have inevitably teamed up with their harder-edged buds in Pierce The Veil? Or better yet, had Benji and Joel not embraced the sound of Lou Pearlman-era boy bands on 2004’s “I Just Wanna Live,” would “their little brothers,” as Joel put it, in 5 Seconds Of Summer had the career they’ve had thus far?

For me, that’s what I always admired about Good Charlotte, especially in those later years. They never threw up their hands. They never just wrote “The Anthem Pt. 2.” They never took the easy way out. And in many ways, that is exactly what made their first night back so endearing. Sure, at the Troubadour, they played all of their early hits. They opened with “The Anthem” and closed with “Lifestyles Of The Rich And The Famous” and just like they did in the early ‘00s, those songs sounded like the work of a scientist who went into a lab with some plutonium, the mid-‘90s Fat Wreck Chords catalog and a case of Manic Panic hair dye, only to come out with the most perfectly engineered pop-punk band alive.

But for many, including Benji and Joel, the highlight of the night may have actually been performing their brand new single, “Makeshift Love” (and not just because longtime producer John Feldman, clad in an expensive suit, decided to stagedive in the middle of it). As the members of Good Charlotte joyfully thrashed through “Makeshift Love,” it did feel like a return to the sound that initially made them so famous. But it also felt like a culmination of all the history discussed here. And as the final notes of that track rang out at the Troubadour late on Thursday night, something became abundantly clear: This reunion isn’t about cheap nostalgia. It’s about a truly adventurous band who, after nearly 20 years together, have absolutely earned the right to look back and smile.  alt.

Trevor Kelley is the co-author of Everybody Hurts: An Essential Guide To Emo Culture. And, let’s face it, he was there when most of us weren’t.