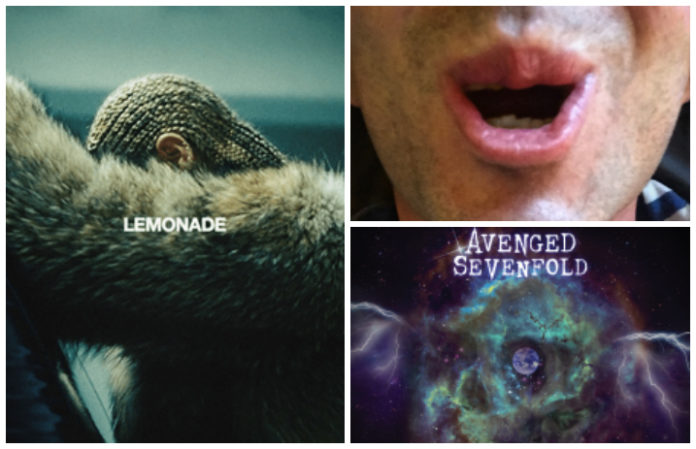 The element of surprise ruled in music in 2016. The traditional album release strategy of a single, some interviews, radio play and another single fell by the wayside in favor of elaborate stealth releases. Beyoncé’s Lemonade might have been the most notable, the one that set off real discussion about surprise releasing as a viable strategy. But she wasn’t the only artist to spring something on us.

Skeptics suggested that it could only ever work for those with a giant, worldwide fanbase guaranteed to buy into anything they did. But that didn’t stop rock’s bigger—and smaller—names from being inspired to try it. Last year, Avenged Sevenfold and Say Anything both dropped full-lengths with little to no warning; in the former’s case, there were hints including online fan polls and their logo being beamed onto buildings in London and Toronto, but with Say Anything, the album was simply not there one day, then it was. Max Bemis posted a lengthy statement when I Don’t Think It Is appeared, explaining that he was “a bit weary of doing the same song and dance leading up to the actual end­game.” M. Shadows was vocal about being inspired by Beyoncé and fellow surprise album-dropper Kanye West; self-generating buzz by harnessing the power of the internet is, as far as he’s concerned, the way to go. It paid off, too: A7X’s The Stage hit the Billboard charts at No. 4 after shifting 72,000 units on its release, despite there being no prior warning.

“I don’t think three months of promotion for a record was going to cut it this time, and we wanted to do something different,” he tells us. “All the artists who’d been exciting us were doing something different. I think Kanye’s one of the greatest artists of the last 15 years. It’s like designer-rap. Beyoncé’s incredible, as well.” That’s not to say that dropping The Stage out of nowhere wasn’t a risk, and even though Shadows is pleased the band are doing their own thing, he’s aware that not all consumers are as hungry for change in the way they consume music. “We learned that rock fans are a tough bunch to move when you part ways with how they usually get a record,” he admits. “Maybe Middle America isn’t as fed up with it as we were. I guess in our little bubble on the coast it’s fun to get progressive with things. Then you realize there are people who live an hour-and-a-half away from a Best Buy and they don’t use iTunes or Spotify.”

Avenged are currently still embroiled in a legal battle with their former label, Warner Bros., but Shadows was adamant that their new home, Capitol, was more than accommodating of their creativity and ideas. When we contacted Capitol to find out the label’s perspective on surprise releases, they told us the idea came fully from the band, but declined to go into detail because of the ongoing court case.

One label exec who’s in favor of the surprise strategy, though, is Gary Lancaster, general manager of Eleven Seven Music Europe.“The consumer in 2017 demands instant reward,” Lancaster says. “The desire of artists now—as it has always been—is to remain exciting and engaging.” Engagement is a buzzword in the social media age, and he thinks surprise releasing is intrinsically linked to the rise in people consuming music online. Enthusiastic fan communities, even small ones, are vital in ensuring albums actually sell. “Would you rather have a million people look at something, or a thousand people actually buy it?” he says, adding that when fans really put their mind to it, they can take a trend out of their online community and into the wider consciousness: “With suitable engagement, the potential exists for that excitement to bleed into the mainstream.”

Streaming is another important aspect of the surprise release. The conversation around it has changed in the three or so years since unexpected albums started appearing—Justin Timberlake, the Pixies and Beyoncé (pre-Lemonade) all dropped records with little to no notice in 2013—from how it exploits artists to how it’s shaping the future of the industry. The Official Charts Company in the UK is said to be increasing the amount of streams that count as a sale from 100 to 150 due to its popularity, and it’s the medium of choice for surprise albums to appear: Lemonade went straight to Tidal, and The Stage to Spotify. It’s not surprising, given that sales of physical CDs in the U.S. decreased 31 percent in 2015. The traditional press cycle—designed to make people buy albums—isn’t doing the trick anymore.

The key, really, is creating something exciting enough to make both dedicated and new fans buy into a band’s ideas. It doesn’t always have to culminate in a complete surprise, either. UK  horror-punks Creeper created a paranormal mystery back in August by way of online ghost stories and a social media blackout, and news of their “disappearance” made local newspapers in Great Britain as well as the music press.

“Creeper exists in a fantasy world, to a certain extent,” vocalist Will Gould told us. “It just doesn’t feel right or natural to us to just plop a release out and simply adhere to conventional marketing tropes. We like to do things with a bit of flair.” Creeper finally announced in October their debut album, Eternity, In Your Arms, would be released in March 2017. Are they, like Avenged, bored of the traditional approach? “We certainly are, so we can only imagine that other people feel the same way we do,” they told us. “Rock music at large has become very safe, sanitized and by the numbers, from the songs to the ‘packaging,’ and this is one of the very things that we are standing against in Creeper.”

Creeper’s viral campaign was certainly one of the most elaborate the alternative world has seen lately, but they’re not the first to encourage word-of-mouth promotion among fans by creating a cryptic talking point. Bring Me The Horizon did it in 2015 by posting an umbrella icon, with no added explanation, across their social media accounts in the run-up to That’s The Spirit , and Motionless In White used geolocation technology to create a “scavenger hunt” in which fans could locate and stream tracks from their third album, Reincarnate.

When it comes to whether surprise releases can work within the alternative scene, it’s likely that, when paired with some creativity that genuinely gets fans talking, they can be just as successful—if not more so—than something that follows the usual promo path. Bands regarded as niche or underground are likely to remain so, even with promotional activity; breaking away from that press cycle and creating a different kind of campaign on their own terms could—when done right—be the thing that takes them to the next level. What’s clear is that the tried-and-tested release strategy is being questioned and updated by musicians across all genres, and the key is doing something that’s interesting enough to catch people’s attention.