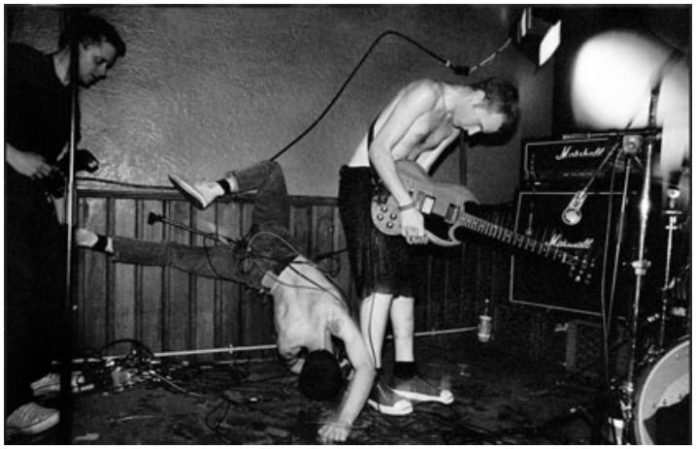 Fucked Up, Got Ambushed, Zipped In (a body bag)

If you’ve ever wondered where Dischord Records’ most well-known band, Fugazi, got its name, just take another look at the line above. It’s a term soldiers used in Vietnam and according to band lore, singer/guitarist Ian MacKaye (who was also a member of Washington, D.C.’s seminal hardcore punk outfit, Minor Threat) was reading (or had read) a book of short stories by Mark Baker called Nam and thought it would be a good name for the new group he was forming with bassist Joe Lally, drummer Brendan Canty and vocalist (and eventual guitarist) Guy Picciotto. It was 1987 and they had to put something on the flyer, so Fugazi it was.

READ MORE: Why Fugazi are still the best punk band in the world—an Op-Ed

Now it’s almost 31 years after that first show, and it is safe to say that many people probably feel like they are living in a virtual state of fugazi, based on the meaning of the above acronym. While we hopefully haven’t been “zipped in” just yet, the feeling of “fucking up” and “getting ambushed” permeates the lives of most Americans, and when it comes to music, it’s simple: The world needs Fugazi more than ever.

Without getting too political or crying in our near-beer (the guys in Fugazi famously don’t drink), Fugazi or a band with similar strength, talent and beliefs would be a welcome oasis in a desert of oligarchical shit. While the band haven’t played live since November 2002 and haven’t put out any new material since October 2001 (not including “The Word,” which was technically released on the 20 Years Of Dischord compilation in 2002 and hadn’t been released previously), the message behind their songs has never been more pertinent and never been so necessary.

Fellas, if you’re reading this right now, we need you.

The world is a mess, and frankly, a shot in the arm of the ideals, fortitude and courage of Fugazi is a necessary tonic. For the uninitiated, Fugazi were proof that good things can (and do) come out of our nation’s capital. MacKaye, Picciotto, Canty and Lally stuck to their beliefs despite gobs and gobs of money being both thrown at them and available to them while putting out one great record after another. Lesser men would have taken one of the many major-label deals they were offered and cashed in, but Fugazi never did. That’s not to say they did not make money, because they did.

Part of Fugazi’s ethic was to make the band self-sustainable and turn a profit, but they also didn’t feel like there was any reason to stick it to the fans and wrangle every last dollar they could out of the people who loved their music. Shows were kept as close to $5 as possible during the band’s heyday, and even if they were $10 now, would anyone quibble about paying $10 to see Fugazi? Records were typically $9 or $10 and even now, you can still buy a brand new Fugazi LP on dischord.com for $14.

READ MORE: ‘Orange Is The New Black’ actress fronted a punk band in the '70s

In a 2014 interview, MacKaye stated they “sold over 2 or 3 million records” so even at a modest estimate, none of the guys in the band should be hurting for money in this lifetime due to the completely “Un-American” way their label, Dischord Records, does business. But Fugazi’s success also allowed Dischord to support the music scene in their hometown and take chances on other hometown bands without ever signing a contract. In fact, their approach to business may be more “American” than any of the companies led by the vaunted 1 percent who control our fate now.

The “About” page on Dischord’s website talks about how the label only works with D.C. bands and there are never any contracts, so their agreements are based on “friendship and trust.” Imagine if our current government was able to do business with other countries in this fashion. Consider what that world would look like. Before you go and think this is getting a little pie-in-the-sky, consider that MacKaye (and probably Dischord partner and former Minor Threat drummer Jeff Nelson) have some pretty strong and steadfast beliefs about how to do business and who to do it with. These guys are not pacifists, even if they don’t condone violence, which is why MacKaye or Picciotto would often stop a Fugazi show if the dancing got too violent.

[Author’s note: This occurred, at least once, at every Fugazi show I ever attended which if memory serves, was five, including the one in 1989 when my first band, Religious Skid, got to open. I still have my signed copy of the first EP, and it may have to be pried from my cold dead hands when I die. There is a great description, here, of what MacKaye did when a pit formed during "Suggestion.” Also, if you’re interested, don’t bother looking up Religious Skid. We didn’t make it past our final show in 1990, which was another cool one opening for Nardcore punks Dr. Know, and never put anything out.]

Fugazi have never backed down from their beliefs, which is another lesson most people—not just politicians and musicians—can learn from. Fugazi’s lyrics often directly confront social and political ills: The aforementioned “Suggestion” from their first eponymously titled seven song EP in 1988 confronts the ignorance created by a victim blaming culture that condones sexual assault when “boys will be boys.” Fugazi knew this was bullshit 30 years ago.Maybe somebody should send a copy of this record to Harvey Weinstein.

Each of Fugazi’s releases (there are a baker’s dozen, including EPs and LPs) deliver the goods, and much like when you see Jaws on cable, it’s difficult to turn them off once you turn them on. Standout tracks such as “Cashout” and “Strangelight” from 2001’s The Argument, “Caustic Acrostic” from 1998’s End Hits, “Bed For The Scraping” from 1995’s Red Medicine, “Last Chance For A Slow Dance” from 1993’s In On The Kill Taker and “Nice New Outfit” from 1992’s Steady Diet Of Nothing punctuated the powerful artistry the band established with the genre-defining efforts of 1989’s 13 Songs and 1990’s Repeater. These first two classic records, filled with angular, angsty guitar, tightly wound rhythm and thought-provoking lyrical content, cemented Fugazi’s place in music history as the band, who toured incessantly, became one of the most powerful live acts of the 1990s. Fugazi shows were unforgettable.

The world needs Fugazi, or at very least, bands unafraid of holding onto some ethics, human decency and a commitment to making great, courageous records that give zero fucks about fitting into someone’s idea of a box. We need somebody to teach the tweeter-in-chief a thing or two about what it really means to lead and MacKaye, Picciotto, Lally and Canty are just the guys to do it. Fugazi have never officially broken up, so the faithful diehard fans can hold out hope of either seeing the band again or getting some new material some day. Hopefully that day is coming soon.