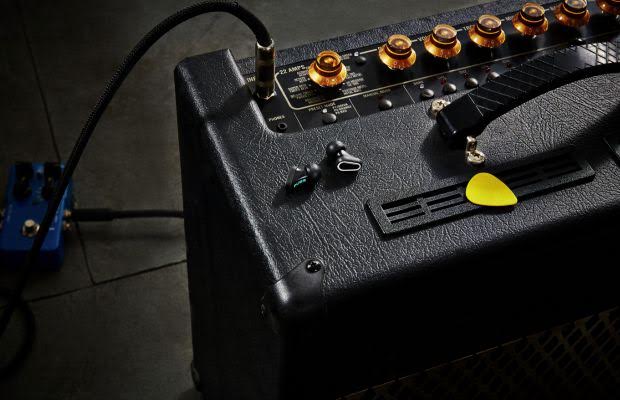 Roughly five minutes. That’s the amount of time it takes for live music to permanently damage unexposed ears at a show. Five minutes.

That’s one to two songs. And you don’t have to be at a rock show—exposing ears to any sound at a volume of 100 decibels—or a unit used to measure the degree of loudness—for longer than 15 minutes causes irreversible damage.  At 103 decibels it takes seven minutes. 106 takes under four minutes. Most concerts—depending on the venue—range between 100 and 106 decibels in volume, making five minutes  a safe estimate for when damage begins to occur.

A show at 106 decibels creates the same sonic damage on ears as a running chainsaw or a train’s horn, says Patty Johnson, the director of audiology with Etymotic Research. Johnson says that exposing ears to two hours of live music at 106 decibels ages the ears 2.4 years on females and 1.8 years on males. That means if you go to one show a month for a year, with merely two hours of live music at this volume, you could age your hearing about 24 years. If you go to a two-day festival with 12 hours of music at this level each day, you could do that much damage in a weekend.

What’s going on when this sound hits unprotected ears, says Johnson, is it’s damaging the nerve fibers that send hearing signals to the brain. The damage is permanent and can cause tinnitus, or an internally generated ringing of the ears. About 50 million Americans live with tinnitus every day. Some cases are manageable—like a slight buzz after mowing the yard—but if it progresses, it can cause continual ringing.

Norma Mraz, a doctor and board member of the American Tinnitus Association, says the ringing can get so severe it can cause anxiety, depression or lack of sleep. For some, the symptom is caused by repeated exposure. For others, it could be set off by merely one experience at a single show. “If you don’t know how loud is too loud, then you’re subjecting yourself to danger,” Mraz said.

So, that little buzz in the back of your head after the show? That’s not adrenaline. That’s irreversible damage that could create physical and mental problems for decades. It comes in the form of buzzing, hearing loss or permanent sound sensitivity.

How to protect your ears at shows

There are three options for protecting your ears at all shows, from the Vans Warped Tour to your buddy’s basement party. The first is investing in a pair of high fidelity earplugs. These can start in price at roughly $10 and go up. Johnson says Etymotic produces a plug called the ETY Plugs. This plug, which runs for $12.95, can reduce the decibel volume by 20 decibels—or the difference between damage after five to 15 minutes to damage after eight hours.

Mraz said the standard plug reduces the volume about 18 decibels. This is still loud enough that you can still ride the rush of the show, with a lower risk of hearing damage. Other affordable options of high fidelity earplugs include Earasers, which has a “HiFi” plug for $40 at Musician’s Friend. Dubs also sells a pair at Musician’s Friend for $25.

If picking up a pair of high fidelity earplugs isn’t in your budget, there’s always the over-the-counter earplugs that can be picked up at most pharmacies or convenience stores. These reduce the volume and protect your ears—the clarity just isn’t as high quality as it’d be with a pair that costs a little more money. These plugs muffle the sound, but still protect against damage. Mraz says she’s even found some larger venues have these plugs handy at a the box office for those who ask.

The third option is staying as far away from the sound source as possible. Okay, so you forgot your earplugs, you can’t find anyone with a spare pair and the venue doesn’t have any. The best thing to do is to stay as far away from the speakers creating the noise. If you’re old enough, step back to the bar and enjoy the show from a distance. If you’re younger, maybe hang toward the back by the merch tables. Just don’t stand in  the front row without protection.

How to protect your ears when playing music

Johnson says the frequency range of 3,000 to 6,000 hertz is what’s damaged most when exposing ears to a high volume of music. This frequency range is important—it’s the frequency where most speak letters like T, K, S, SH and TH. Having damage over time can make it difficult to hear words with those letters.

Ace Enders, music producer and frontman of the Early November, hears young bands almost daily  say “my ears are already shot” and tries to raise awareness with the artists. “I think that people just don’t understand what your ears ‘being shot’ mean,” he says. “I always try and tell people that if you think it’s bad now—it’s definitely going to get worse.” Enders says he has ringing in his ears, which bothers him most at nights before bed. It wasn’t until about three years ago that he really began taking measures to protect his ears both in the studio and at shows.

In-ears not in the budget? Refer to some of the high fidelity options above. Musicians—especially the up-and-coming artists practicing in a tight space like a basement or garage—expose their ears to hours and hours of loud volumes every day. Gino Scarim, tour manager and front-of-house engineer from the Amity Affliction and monitor engineer for the Plain White T’s, suggests getting custom-molded earplugs. “If [music’s] part of your life, then protecting your ears should be part of your life as well,” Scarim says.

Scarim, who’s been working in live sound since 1999, also advises to turn it down a bit in practice. “There’s no reason to be super-loud,” Scarim says. “ You can actually hear what you’re doing better at a lower volume.”

Protecting your ears in the studio

The studio’s an entirely different aural environment—but it’s also important to take precautions when challenging your ears in there.

Take breaks. Enders says he takes breaks throughout the day to give his ears rest. “I do everything at a low volume and if I feel like my ears are starting to affect how I’m thinking—and I know my limits—I definitely take [a break],” Enders says.

Mix at a controlled volume. There’s no reason to be too loud in the studio environment. The volume of music being produced can be controlled, therefore it shouldn’t get too overbearing for too long of a time. “Bring everything down,” Scarim says. “When you bring volumes up, different frequencies start distorting and you’re not getting a true response to anything. It doesn’t need to be blaring.”

Touring musicians can also preserve their ears by wearing earplugs during daily activities. Enders says he wears earbuds in different daily environments to cut out noises—like road noise when traveling from show to show in a van or house music when at a venue and not performing. “There’s so much noise all the time,” he says. “Keep [your ears] protected as much as possible because you don’t realize how much of a toll that little stuff takes.”

Are you or someone you know suffering from Tinnitus? Reach out the American Tinnitus Association at www.ata.org for help.