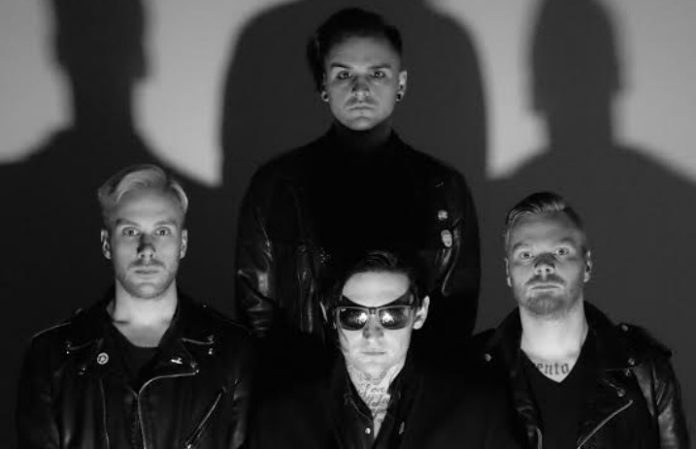 This Friday, former Aiden ringleader William Control (Wil Francis) will release the next installment in his electro-goth evolution, a four-song EP called Revelations: The Pale. Unlike previous releases where Control wrote, played and recorded the songs, he enlisted the help of his bandmates (bassist Kenneth Fletcher, drummer Benny Tourkantonis and synth op Ian MacWilliams), dubbed the Neuromantic Boys. The always-charming frontman spoke with Jason Pettigrew about choosing EPs over full-length LPs, avoiding pigeonholes and why he simply can’t be “normal.”

Have to ask: Why release EPs? Why not release 10 tracks and bang! A full LP?
Because of people’s attention spans. You put out a full-length LP, you release one single and then it disappears from their feed forever. Record done. There’s all of your press and attention, done in a week. Then you spend the next two years playing that record only a handful of people have heard or read about. We’re looking to get some tours in February and March, so we’ll release another one around then. You have to keep it fresh and keep people interested in what you’re doing.

What have you done differently on this release that you haven’t done before? I’m not talking about gear or technique: I’m talking about what you felt you needed to do to evolve as an artist and keep yourself engaged.
The biggest thing I did was to write songs and then step back from it, sit with the songs and then go back in and rewrite/revise things a couple of times. On all the other albums I’d done, I’d written, recorded and released them. There are also a lot of analog instruments on this album and vintage synthesizers.

And it’s the first release in a band format. That way, they were part of the refining and it wasn’t just you running the risk of being insular during the process. Did you think now was the time in William Control’s evolution where this had to happen?
Oh, yeah. William Control has always been a budget project I’ve had to do on a shoestring because I’ve had no money. For the first time, I had some money to make this [record], fly [musicians] out, get opinions and make the songs the best that they can be.

We started writing this record last year, before the final Aiden tour went out. Throughout this year, after the Aiden tour in February, all the way through summer, we’ve been working on this. We wrote about 60 songs and whittled it down to the best 16. It was a big undertaking—I think it was worth it. We ditched our old ways of working and focused on songwriting. We had better sounds to work with and it was more inspiring than it’s been in a long time. We stripped it down to the basics of how a band would be playing it, as opposed to, “Well, let’s add 15 more sounds in the chorus to make it sound big.” The whole thing was a learning process.

What did you learn about yourself?
That I’m not a very good musician. [Laughs.] I’m lucky to be making music in 2016 where technology has caught up with people’s needs. It’s easy to program drums, quantize synthesizers and use MIDI. We were watching videos of how bands like New Order and Depeche Mode made records, and that shit was complicated. They had machines where you had to punch out cards with the MIDI notes on them and feed them through a machine like a music box. I don’t think I could be in a band like that back then.

Let’s be honest: I want to be the biggest band in the world. I want to play big shows, I want to travel all over the world, I want to take this music to the masses.

You don’t seem to be the kind of guy that would surround himself with yes men. Did you miss that kind of input in the context of William Control?
What’s weird about this is that I am in a band with guys who are not like me at all. Kenneth Fletcher is probably the polar opposite of me. I like dark shit, greys, makeup, tattoos; he listens to Wu Tang Clan, lives in the Bronx, loves fashion and is into Kanye. His favorite band is Bruce Springsteen. We’re so different, but we share a lot of the same interests: We both grew up listening to punk-rock music, we love Joy Division and New Order. But he’s not the kind of guy who’s like, “Everything you do is cool. Everything is perfect.” He has no problem telling me to go fuck myself—which is what I need in my life.

Let’s be honest: I want to be the biggest band in the world. I want to play big shows, I want to travel all over the world, I want to take this music to the masses. That is my desire. Is it gonna happen? I don’t know. When I started William Control, I didn’t know what the fuck I was doing. I was writing songs on synthesizers, but we still wrote them like we were punk-rock songs, rather than gloomy, goth, industrial bands. So we hit on a certain thing that kinda sounded like those ’80s bands, but not entirely because I didn’t know what the fuck I was doing. On this one, we wanted to go deeper than what we’ve done, but still write some catchy shit that people can dance and sing to.

I want to be a musician that can be recognized in all scenes, because the songs are good.

No problem there. But do you think the nature of what the band does—electronic/goth tracks with big dance beats—is somewhat limiting when it comes to audiences?
Not at all. The best part of William Control is that we’re not pigeonholed. We can play the Whitby goth festival and they’ll love it. We don’t fit in only one scene: We can tour with Black Veil Brides and it’s fine. We can tour with Combichrist, who are much harder, and it works. I’m not trying to be big in the industrial scene: I want to be a musician that can be recognized in all scenes, because the songs are good.

Revelations does sound more ambitious than the stuff usually embraced by the subculture.
I’ve been in the subculture for far too long. [Laughs.] I want to elevate to the culture. I don’t know why, but I can’t seem to write a song in a genre that’s popular. It’s the same reason why I can’t like what’s popular with the world at large. When everyone in my high school went to football games, I never went along with it. I don’t know why: I really like pop culture. I wish I could be into it more than I am. But for some reason, it doesn’t jive with my pleasure centers. I’ve never been able to fall in line with Top 40 radio.

Maybe you need to go out on tour with Charlie XCX.
Dude, I am ready to go right now. alt

You can preorder Revelations: The Pale on iTunes here or preorder the CD here.