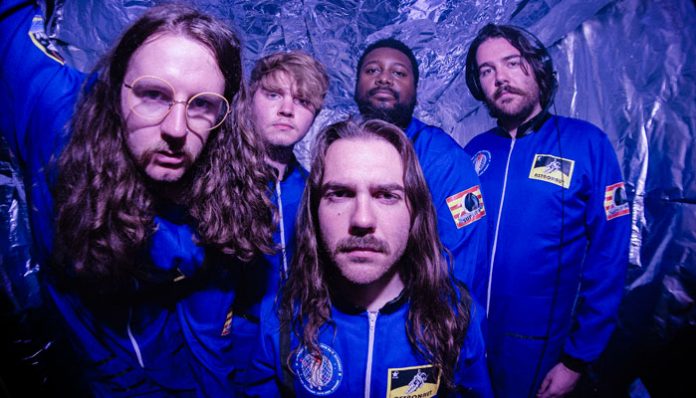 Do people still use that old aphorism “Shoot for the moon and land in the stars”? Well, Midwest pop-punk mavericks Wilmette have loaded their pop-punk rocketship with the fuel to get them out there. Today AltPress is premiering the video for their new track, “Adderall.” The song appears on their forthcoming self-titled EP out Sept. 25 via Mutant League Records.

As for the video? Well, Taika Waititi certainly sleeps well at night, but you can tell the band had a blast making it. The men of Wilmette—frontman Hailey, vocalist/bassist Peyton Day, guitarists Griffin Guge and Brompton Jackson and drummer Aidan Hailey—chatted with AltPress about metaphors, marauding aliens and the madness of shooting a video on Michigan sand dudes with no shade trees.

There’s so much going on in the video for “Adderall.” There’s the relationship that’s using the drug as a metaphor. Not to mention a crew of aliens whose intentions may not be the kindest. Our heroes in their spacesuits are traversing a barren planet (but it’s probably the closest desert). Are the intentions of the video and the song the same? Or did some members merely dream of being astronauts as children?

PEYTON DAY: This video is supposed to be the epitome of hindsight in a relationship. As the aliens rummage through the crashed spaceship, they find a log of events that detailed how the astronauts crashed into their planet. They know they were too late in helping, and all they can do is watch the aftermath. Only two-fifths of the group come back, signifying a change in their reality, while the aliens are obviously unscathed.

Does the CDR of “Adderall” blow the minds of the space marauding aliens? Or is that a willing suspension of disbelief?

DAY: I think it was supposed to blow their minds in some funny way. But it was also supposed to represent a relationship where, after you take a step back and assess yourself and everything around you, you’re able to fix a lot of character flaws you had previously in the relationship. The aliens exorcised this by being interested in our crash logs and sending us back to Earth after we traded the “Adderall” CD. We traded the CD to go back in time and be with the boys again since they didn’t make it back to the ship in the end, which just represented a fresh start.

With the complete moratorium on live gigs, are indie bands seeing a lot more support from fans via digital means? Or is it an out of sight, out of mind kind of thing?

DAY: Honestly, support is such a fickle thing, especially in smaller genres. There are days where you feel the world is behind you and days where support feels more obsolete. We are dropping this EP on vinyl, which will be our first-ever time, and we’re really hoping our core base picks up a copy.

What were the funniest things we missed on the sets of the video that didn’t make it into the final cut?

BROMPTON JACKSON: There’s a lot of footage of us walking around on the sand dunes. But what we didn’t show was how hilariously long it took us to get up to the top of them. It probably took some of us a good 15 or 20 minutes to get up there. Not to mention a couple of falls back down the hill that set us back a couple of times. For some reason, we really didn’t think about the fact that there are no trees and no shade anywhere. So once we got up there, some of us were just dying. Not to mention all of the looks and questions we got from people about what five dudes were doing wearing spacesuits in the middle of such a popular vacation destination.

If the CDC announced next week there was a proven cure and live events could resume, how would you celebrate: Playing a gig, going to someone else’s show or something else altogether?

GRIFFIN GUGE: If everything cleared up, we would definitely be interested in doing some sort of hometown show just to celebrate and get back into the swing of things. We will also be attending many shows once it becomes possible.

Does the band have a philosophy about these interesting times we’re in? Are you doing more writing, playing or Netflix-bingeing? What’s the best use of time for Wilmette?

AIDAN HAILEY: They sure are interesting times. I don’t think anyone was at all prepared to have a pandemic thrown at us. We’re just doing our best to be productive and stay safe. Other than listening to the EP on repeat until I’m sick of hearing it. Personally, I’ve been playing an insanely unhealthy amount of Old School RuneScape and absolutely bingeing everything on Netflix, most recently The Order.

After the Sept. 25 release of the EP, what are the next plans for recordings or other digital activities?

GUGE: Nothing is set in stone yet, but we are planning on creating more content while touring is not an option. We currently have a few things in the works, such as streaming events and even some small releases later in the year.

Wilmette’s new self-titled EP will be released Sept. 25. You can preorder physical copies here and presave the release here. But for right now, watch Wilmette do battle with both aliens and desert sands below.