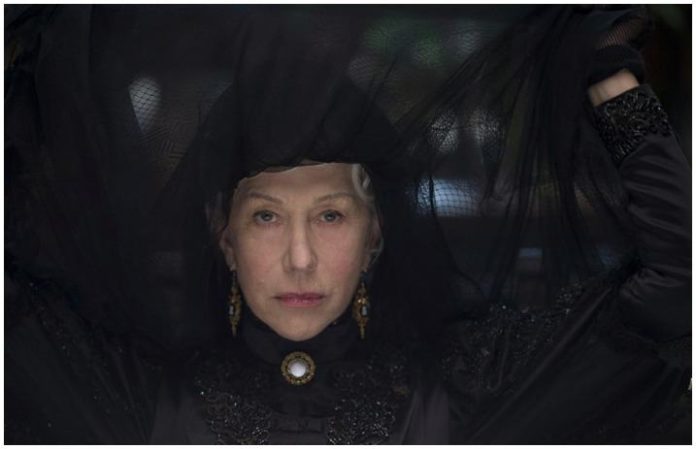 When someone is shot and killed, who carries the blame for their death? Obviously the shooter bears a burden for pulling the trigger, but how far does it go? For Sarah Winchester, that guilt rests at least partially on the shoulders of the people who created the weapon in the first place.

Winchester, a haunted house/poltergeist movie set in the early 1900s, is far more relevant to today’s issues than it seems from a distance. The core premise of the movie is that Sarah Winchester, played by Helen Mirren, widow of William Winchester and heiress of the Winchester Repeating Arms Company fortune, is consumed by guilt from the damage her family’s creations wrought on people across the world. Using her family’s wealth and connection to the spirits of people who were killed by Winchester rifles, she has a team of builders working 24 hours a day, seven days a week to construct rooms whose designs are conveyed to her by whispering spirits.

These rooms, built onto her ever-expanding mansion in San Jose, California, are recreations of the rooms where these souls were killed. Once constructed, they grant the spirits the chance to assume a more tangible form and communicate with the living. Sarah, who believes that she lost both her husband and infant daughter to a curse that plagues the Winchester family for their role in the deaths of thousands dating back before the Civil War, takes that opportunity to speak with the dead and help them achieve peace. When a spirit passes on, she has the builders tear down the now vacant room to make space for a new room. When peace is not attainable, she has the builders nail the door shut with 13 nails, a holy number that prevents the potentially vengeful and angry spirit from roaming the house and causing more harm to the living.

Sarah’s fellow co-owners of the Winchester Repeating Arms Company are, understandably, somewhat concerned by her choice to spend her fortune building a house that looks like what the Weasley’s would have built if they had more than two bronze knuts to rub together. They enlist the help of Dr. Eric Price (played by Jason Clarke), a therapist with a tragic past, hand-selected by Sarah to conduct an evaluation of her mental state. If he finds that she is not mentally fit, the men running the company will be able to seize her stake in the company.

The movie begins with somewhat awkward pacing, but since it only clocks in at 99 minutes, it doesn’t waste much time before getting into the heart of the story. While it doesn’t hide its scares very well, directors Peter and Michael Spierig don’t force in jump scares for the sake of a cheap scream. They set up each and every one with excellent tone, lighting and camera angles that build anticipation effectively, to the point where audiences shouldn’t be surprised to find their hands inching up their faces in preparation for a ghastly image. The music gets a bit heavy-handed at times, but it rarely crosses a line to become exasperating.

Since Winchester is a horror movie, it doesn’t take long for a vengeful spirit to force its way into the house and begin seeking revenge for the damage Winchester rifles wrought on his life. The spirit in question is that of a former Confederate soldier whose brothers were killed fighting for the South during the Civil War, and he blames the creation of these cutting edge killing machines for their deaths. He’s not wrong—advanced killing technology, specifically the rifled barrels of Winchester rifles, gave Northern soldiers a considerable edge in the war that helped them eventually secure victory.

Winchester doesn’t draw the same clear lines to modern issues as last year’s February horror movie Get Out does, but it doesn’t hide them either. The Confederate soldier at the heart of the story takes out his anger from his family’s death by murdering an office full of people. The spirits introduced in the movie include a Native American warrior, a slave, a cowboy, a young woman, a policeman, a suicide victim and more. Sarah Winchester takes time to clearly spell out that while her family’s creations have value, they are specifically designed to kill. It doesn’t matter if the killing is for some perceived notion of good or evil; they still bring about death with efficiency the human race had not seen before.

That efficiency is accelerating at a rapid pace. According to Gun Violence Archive, guns claimed the lives of 15,587 people in 2017 alone. Winchester doesn’t make a strong statement about gun deaths other than the fact that the loss of a life, no matter whose life was lost, is still a death, and those deaths carry weight. Anyone can enjoy Winchester for what it is, but it would take someone completely disconnected from current events to miss the connection to our world today.

Winchester, a PG-13 scary movie, hits theaters today. The expectations for a movie like that are roughly between the floorboards and the foundation, and it surpasses that to an extreme degree. With Oscar bait chumming the movie theater waters right now, and leftover big-budget thrillers such as Jumanji, The Greatest Showman and Paddington 2 still raking in ticket sales, there is a real chance that Winchester is overlooked and disappears from the big screens within weeks. However, if you are in the mood for a change of pace from the main offerings from Hollywood and would prefer to spend an hour and a half or so with solid-to-good poltergeist/haunted house movie, then you could do far worse.