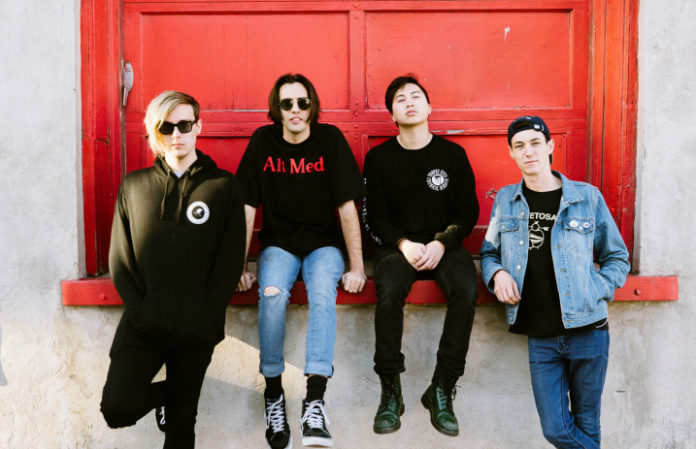 Aussie pop punkers With Confidence have released a new music video for their track “Archers,” giving fans a peek into their life on the road with State Champs in North America, along with their spring UK shows.

“Archers,” taken from the band's 2016 album Better Weather, is all about powering through, even when it seems like that dream seems impossible, and we caught up with frontman Jayden Seeley to talk more about the band's past few months on the road and what it means to them to see their hard work paying off.

Alt Press: What's the most standout moment from your time on the road with State Champs?
Seeley: Honestly, one day I was super hungover and had a nap on the bus and woke up at 8 p.m. to our tour manager with, “Dude, you're on stage in like five minutes; wake up!” Literally rolled out of my bunk onto stage to over a thousand people screaming our songs to us. Was one of the craziest, most surreal moments of touring so far.

What's one moment that didn't make the music video, but you kind of wish it did?
Hahaha, we celebrated Cinco de Mayo for the first time during State Champs and shit got pretty wild in a bar. I probably shouldn't get too much into it, but if there was footage from the bar that night it would have made the video a whole lot more interesting.

This song is all about working to make your dreams as a band a reality, even when people seemingly deemed it impossible. How does it feel knowing that your hard work is starting to pay off—and that you're getting to travel the world because of it?
It's incredible. When I wrote this song, I was bumming around areas of Western Sydney with the hope that this band would work out. A year later, I've already experienced and seen things I thought I never would. We're super lucky, and I think this video encapsulates that feeling perfectly.

Give the video, directed by Brandon Lung, a watch below:

With Confidence have announced an Australian tour with Seaway and WSTR and are confirmed to perform at Bazooka Rocks Festival in the Philippines on June 25. The band will also be supporting Mayday Parade in the U.K. and Europe for the 10th anniversary of A Lesson In Romantics. Check out the band's full list of tour dates below!

With Confidence are currently nominated for Best Underground Band at this year's Alternative Press Music Awards, set to take place July 17 at the Quicken Loans Arena in Cleveland, Ohio! Make sure to cast your vote now, and get your tickets here.

What do you think of With Con's touring adventures in their new video? Let us know in the comments below!