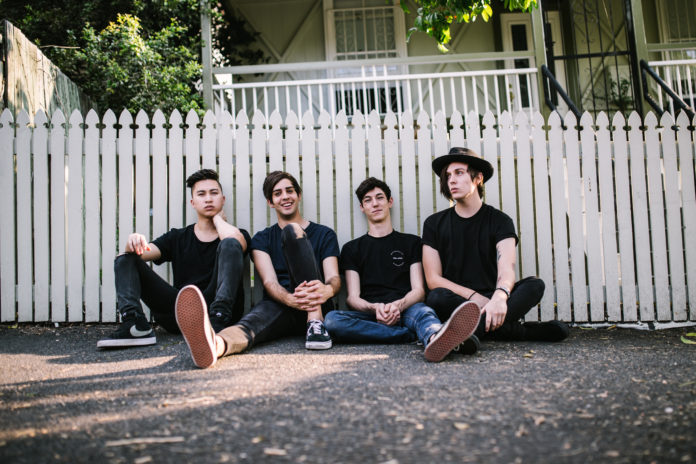 Yesterday, Australian pop-punks With Confidence took over the Hopeless Records page to do a live Q&A. Between the cute dogs and arguments about Blink-182 and Green Day (“Don’t make me choose, guys!”), we learned quite a bit:

They dig a lot of bands in our scene.

They're “working on” coming to a lot of places (Japan, U.S. AND U.K.) and really want to do Warped.

Luke Rockets (guitar) once bought a Macbook off Jonny Craig.

They did an All Time Low/Blink-182 mashup a longgggg time ago and used to play “Weightless” live.

Josh Brozzesi (drums) can do backflips.

Except, apparently, when they're all a lil' drunk on a beach. Then he can only do four. It's okay, Josh.

The inspiration for their band name came from the Dangerous Summer song “Of Confidence.”

I'm oh so sick of everything you wrote/I'll hold you true to every breath that we spoke of in this room.

They don't know if Baltimore is a state or a city.

According to them, it’s the “All Time Low state.” I mean, are they wrong?

Jayden Seeley (bass, vocals) has had Blurryface on repeat lately.

Then there was light discussion of covering Twenty One Pilots and we are here for it.

When asked what their new favorite albums of 2016 are, Josh said he’s been rockin' to the new Somos record.

Keepin’ it tight with other Hopeless homies.

Luke doesn't like orange Skittles so he's basically the antichrist.

Don’t question us on this.

Can’t get enough WithCon? Check them out here or grab a copy of AP333 to see them featured as one of the 12 Bands of March!