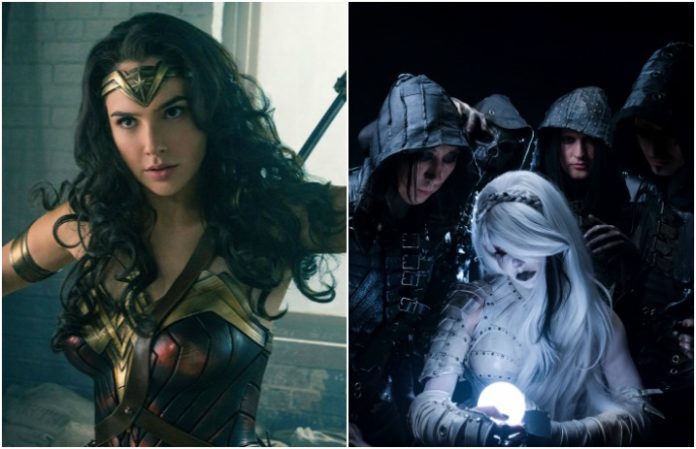 By Emily Lazar of September Mourning

When you think of female superheroes, what do you think of? Something hot? Maybe,… but let’s face it, that’s not all it is. Yes, for some people it seems “sex sells” has always been the number one rule of entertainment, but lately I have noticed a change in the tides.

Remember Halle Berry in Catwoman from back in the day? That S&M getup with open-toed shoes and bad one-liners? I can’t tell you how happy I was when I saw Anne Hathaway in Dark Knight Rises kicking major ass in a full tactical-looking bodysuit and delivering thought-provoking lines like, “There's a storm coming, Mr. Wayne. You and your friends better batten down the hatches, because when it hits, you're all gonna wonder how you ever thought you could live so large and leave so little for the rest of us.”

Yes, I am really feeling how the latest generation of women in comics are being portrayed. For the most part, I believe the writers aren’t treating these female superheroes as an oversexed picture of femininity. I believe they are actually treating them more and more along the lines of a genderless hero and when they don’t treat them as such, we, the audience, speak up; there’s a noticeable backlash.

I remember seeing Scarlett Johansson as Black Widow in 2012’s The Avengers. As far as female comic book characters go, Black Widow hits all the marks I like in my femme fatales: She’s highly intelligent, a skilled fighter, attractive, and has one hell of a backstory. She’s a survivor. I remember reading the reviews in the press after the movie hit, and they praised the depiction of the character.

But then Avengers: Age Of Ultron was released. It was almost like they knew she was getting too much buzz, so they downplayed her strength of character and brought out a more submissive “damsel in distress” that was totally contradictory to how she had been established in the other movies. Add to that the total lack of Black Widow merchandise; well, I’m not going to lie, I was pissed, and I wasn’t the only one. Fans were outraged. We have one of the most bankable female leads out there as one of the most awesome femme fatales in the Marvel Universe and they throw a wet blanket on that fire. Black Widow came back kicking ass in Captain America: Civil War and Marvel has hinted that a Black Widow movie might still happen in the future after Avengers: Infinity War, but I think I speak for the masses when I say we’re still kind of pissed.

A couple weeks ago, Wonder Woman was released to theaters. (Warning: Spoilers ahead!) Wonder Woman is one of my favorite female superheroes of all time, and if I’m being totally honest, I was a bit afraid that DC wouldn’t do her justice in this film (excuse the pun). DC, up until this film, hasn’t had the best track record with their films. But with Wonder Woman, they scored big. Of course, it helps to have such an immense character on your hands: one of the oldest and most recognized female superheroes of all time. What struck me as genius was the screenplay and the portrayal of the character, which focused not primarily on the femininity of the character, but instead on her purpose as humanity’s ultimate weapon in the war against evil. Gone was any semblance of damsel in distress; any love story was given the backseat to her absolute calling: to end World War I by killing Ares, the Greek god of war. She was portrayed as the half-god, half-human warrior that she is, while her lack of knowledge but utter respect for love, relationships and modern humanity kept us rooting for her until the very end.

Back in the day, Lynda Carter was the actress that brought Wonder Woman to life on TV. Theostume she wore consisted of of star-spangled booty shorts and a corset that left nothing to the imagination. How she fought in that — hell, how she even ran in that without things falling out — is beyond me. Fast forward to Gal Gadot, and you’ll see an absolute antithesis of Carter’s wardrobe. Gadot’s costuming was based heavily on Grecian and Roman warrior garb. Yes, it was form-fitting, but it was an ode to her strength than her sexuality.

All this being said, there is still the argument that she had to follow the lead of a handsome man when she gets to London instead of stepping out on her own and kicking ass. For me, this is a sign of her intelligence: Learn from the locals if you are in a foreign land. Just like the shield she uses to catapult herself into war, she uses this man to catapult herself into an unfamiliar world. As for the abundant amount of chatter in fight scenes about how much her appearance is distracting, I personally took that as a sign of the times the movie portrays;  any female presence in war would cause chatter. Finally, yes, she doesn’t recognize another god right away, which could be perceived as her being less than a male god. When they meet, though, she is still coming into her own power and recognizing her own self. I believe the tandem reveal of Ares and her final recognition of her ultimate strength and power is no coincidence. They happen together to reinforce the hero’s journey and ultimately give the audience exactly what they want in a finale.

Everything taken into account, I believe Wonder Woman made a huge crack in the comic book movie glass ceiling.

Everyday there are changes in our society that are reflected in the arts. Our culture is witnessing firsthand a leveling of the playing field. At the end of the day, heroes have no race, age, color or sex. Heroes just are. They defy the odds. They possess the courage and strength to overcome all opposing forces that try and bring them down, no matter how looming those forces may be. I believe wholeheartedly the more we, the audience, support this view, the more glass ceilings will break and the more diverse these films will become. Heroes have always relied on the strength of those around them for the inspiration they need to kick ass. As we change our collective view on the definition of a “hero,” we become that inspiration and unlock so many more epic possibilities.

September Mourning is a hard rock graphic novel art project. The band tells their story on various media platforms, including music, comic books and live concerts. Volume II was released July 2016, and you can catch them at their Summer Soul Collection 2017 tour: