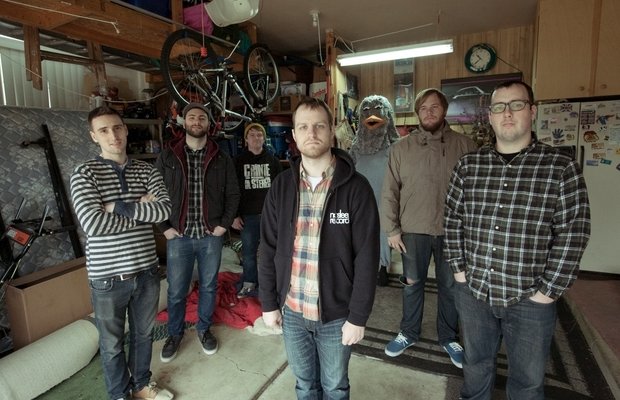 The most controversial track on the Wonder Years’ new release, Suburbia I’ve Given You All And Now I’m Nothing, is “I Won’t Say The Lord’s Prayer.” Easily one of the album’s centerpieces, the song features frontman Dan “Soupy” Campbell discussing the dangers of blind faith and the hypocrisy of organized religion, using his hometown of Lansdale, Pennsylvania, as an example. The song has sparked a heated debate between fans, particularly in online message boards, where Campbell has taken the liberty of discussing the song and his base ideology directly with opponents. Sensing Campbell, a secondary English education graduate, might have some weighty points to make, AP reached out amid the band’s Warped Tour rehearsal to clear the air and get his thoughts on this subject. Don’t forget: The Wonder Years are on the cover of AP #278, which is in stores this weekend!

“I Won’t Say The Lord’s Prayer” definitely has message boards buzzing. What’s your take on all the vehement reaction?
A lot of people, and even some of our friends, were quick to jump to the conclusion that we were attacking them with that song. I think we were no more attacking them by expressing our beliefs than they are attacking any other culture by expressing theirs. In any religion, one of the pillars or principles is, “This is the correct religion and there are no gods but your god.” So to a certain extent, anyone who believes in Christianity or anyone that believes in Islam or Judaism is at the same time saying that the Islamic faith is wrong—which is pretty much the same thing I'm saying [by believing in no particular faith at all]. I believe all of these things I've been brought up to believe and have been pushed on me since I was younger, they're all wrong and false. Not that every principle of the religion is bad, but the crux of it is that I've been lied to.

How does this thinking fit into the overall concept on Suburbia?
The point of the song is to question and stand against the social norm, and the social norm in our suburb has always been Christianity. [“The Lord’s Prayer”] was discussing how I feel misrepresented locally. Growing up, [I feel like] most of the people I knew from our town that really believed in God were either born into or bullied into that—in the sense they'd grown up knowing [Christian dogma], that was the exclusive thing they'd been told, and they had no other perspectives. It affects politics; it affects everything. They're closing Planned Parenthood centers that don't even do abortions in Wisconsin. [Conservatives] don't even look into it—[Wisconsin Planned Parenthoods are] just people who give out birth control. You're opposed to [Planned Parenthood] because your faith has some sort of convoluted issue with it. I think a lot of people have been threatened with eternal flames. There's nothing positive. It's all this negative reinforcement, like, “Well, if you don't believe, you're going to hell.” That's a lot of what we heard growing up.

What do you base your own opinions on?
For me personally, I think the Bible is a book that's got such obviously glaring flaws in it, even as much as grammatically. There's a book called Eats, Shoots And Leaves where the author more or less explores grammatical errors and how they can affect connotation and things like that. At the time the Bible was written, in Aramaic there was no comma. Aramaic was a language that didn't have a comma. We all know that a comma is a pause, a breath in a sentence. The author puts the same Bible verse back to back in the book; one of them it has a comma, and the other doesn't. When she takes that pause, the connotation is completely different. How do you know if there was a comma there or not? How do you know if there was an intended comma, an intended pause? Things like that on such a basic level lead me to believe that it's not something worth putting my entire life's trust in.

So is it wrong to believe in God at all?
To me, there is no flaw in believing in God. If you want to believe in God, that's fine. Where I find a flaw is in being a part of this church that's basing itself off this convoluted text where you can't know everything, and it can't be 100 percent. I just watched this awful montage video of people who are trying to become Miss U.S.A., and they don't believe in evolution. That's not a thing you can believe in or not believe in; it's as simple as mathematics. For years, [Creationists have] said that all it would take to debunk the theory of evolution is one animal that can be proven to have not evolved, to have been “placed” here, and they haven't been able to find it—because it doesn't exist.

I take it you’re a big proponent of Darwinism, then.
It's such a concrete thing. Obviously, even the age of the world is incorrect in the Bible. Something like 6,000 years, it says? Which is ludicrous, so far from the truth, but there are some people who will take that as fact. And taking everything in the Bible at face value as fact is the most dangerous point. That's the kind of thing I'm rallying against in the song. When you just accept this at face value, everything this book says is without flaw—I'm going to ignore all the translations and mistranslations done at the whim of rulers for their own personal gain; I'm going to ignore the fact that there are things in this book that contradict themselves; I'm going to ignore things in this book that contradict my personal morality; things in this book that contradict clearly known facts about the world and still take every word for what it says when it comes to my political stance on things; and not even start to consider them for myself and consider that I could be denying people the right to a happy life together, even though they're the same sex, or denying people the right to see again or walk again, because I'm anti-stem-cell research—it seems really shortsighted to me.

But why get involved, at the risk of alienating fans?
I feel like we have this soapbox, and we have a place where people are listening to us. I can't just sit there and let that go by without saying something. It's not the focal point of the band; we don't have “Hail Satan” on our T-shirts or anything. There's obviously way more to our band than this, but it's something we felt was important enough to mention on the record and give it a song. Especially because it fits into the context of the record—it fits into the context of discontentment with our hometown.

You mentioned gay marriage, which is obviously a timely issue, considering it was just approved in New York. What’s your stance?
It strikes me that the people who say gay people shouldn't be married because marriage is something between a man and a woman are the same kind of people that probably said, “A black man and a white woman can't marry.” Right now, it's illegal in a lot of states to marry the same sex. People say [gay marriage is] a slippery slope, and we're going to be marrying animals soon. First of all, that doesn't affect me in any way. Marry whatever you want—marry a goddamn tree if you want to. Secondly, I think that's kind of a crazy argument, because if it's a slippery slope, you shouldn't have started it by marrying in the first place.