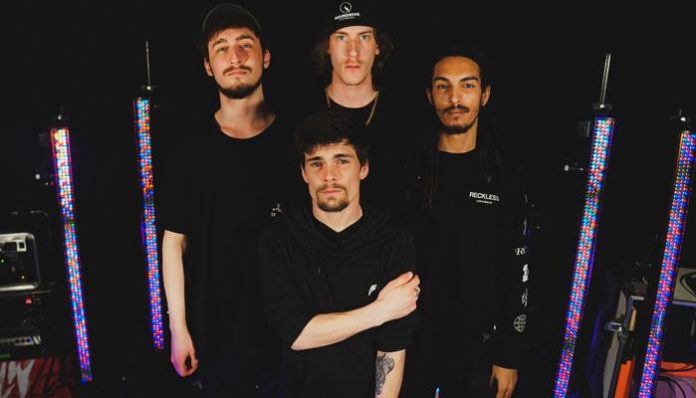 Even in these days of coronavirus, Toronto melodic-hardcore outfit Words Like Wildfire are stoked. While the pandemic has decimated live shows and has made band practices difficult, the quartet are still brimming with enthusiasm. And for good reason: Sleeping With Sirens frontman Kellin Quinn guests on their new single, “Shake The Fear.” Today AltPress is premiering the lyric video for the new song.

Words Like Wildfire—frontman Ian Archer, guitarist Brandon Lee, bassist AJ Chmilar and drummer Avery Mocha—began in 2017 with a dynamic EP (Quarter Life Crisis) and an agenda to play Warped Tour (which they did the following year). While the band are jovial and unpretentious, they are serious about what they’re doing. (Check out their track, “Back To Where I Used To Be.”) The quartet bring back those halcyon days of 2008, but with some tasteful electronic flourishes. And all the heart. The collaboration casually began over social media in June 2019, with Quinn supplying some lyrics and vocals.

“Shake The Fear” appears on Words Like Wildfire’s impending EP, Classic Tragedy, out July 17. Come August, the band will be releasing “I Won’t Forgive You,” the final installment in their three-part music video series on mental health and drug addiction. The quartet will enter the studio this winter to begin work on their third EP. They spoke to AltPress about life in a pandemic, working with Quinn and the “tough love” message conveyed in the song.

Is “Shake The Fear” a tough-love message to someone who needs both care and a reality check? Or is there another subtext to it?

IAN ARCHER: “Shake The Fear” is very much a wake-up call song to a friend or loved one who’s stuck in a cycle of self-blame that stops them from moving forward. The band’s overall message is to be supportive, caring and empathetic to everyone. Even if you don’t fully understand their situation.

AVERY MOCHA: I think “Shake The Fear,” along with most of our songs, is very introspective and written from personal experience. We try to write about the things that are hard to discuss, the things that you tell yourself while looking in the mirror.

Read more: The Dangerous Summer come back from the dead on new single, “Fuck Them All”

Kellin Quinn is always supportive of up-and-coming and virtually unknown artists. How did Words Like Wildfire get on his radar? Besides contributing vocals, did he assist in any other aspect of the song? Did he impart any wisdom to the band?

MOCHA: Honestly, the stars aligned, and it basically happened overnight. We had just gotten back final mixes of the EP from Sam Guaiana [Silverstein, Like Pacific, Rarity] at Room 21 Studios. We had been shopping around for a heavier feature on a totally different track. Just as we had given up on the idea, Kellin sets the local band scene on fire by offering the “golden ticket” on his Instagram. So we took a chance and a week later, it was done.

AJ CHMILAR: The best part was how willing he was to work with us. It wasn’t just, “Send me money, I’ll do a feature.” He wrote his part while still using 80% of our original lyrics. He’d respond and repost us and has straight-up said, “I’m not just gonna throw my voice on anything.” So you really get the sense that he just wants to help grow younger bands that he believes in. I’m sure Kellin had his choice of projects to work with, and the fact that we bubbled to one of the top spots in that pile is a nice reassurance [that] there might be something special about what we do.

Read more: Here’s why Bring Me The Horizon are going heavier on  their next record

The COVID pandemic is really taking a toll on the world. Given the music that Words Like Wildfire play, how do you think this scene will continue to thrive?

MOCHA: Do you remember when we all laughed at Warped Tour’s “No Moshing” signs? [Laughs.] Well, that’s the reality now, if we’re even allowed into venues.

ARCHER: WLW have had to dive into the world of livestreaming on our various social media platforms. The next step would be to livestream full shows with zero physical audience to comply with social distancing guidelines.

CHMILAR: The music industry has always had an uncanny ability to adapt itself to the changing world. I hope that whatever a “live” show looks like in the months and years to come, it can still give that high-octane feeling, regardless of the restrictions needed to keep everyone safe.

What’s the name of the video game you’re trapped in during the vid?

Watch the lyric video for “Shake The Fear” below. You can preorder Classic Tragedy ahead of its July 17 release here.