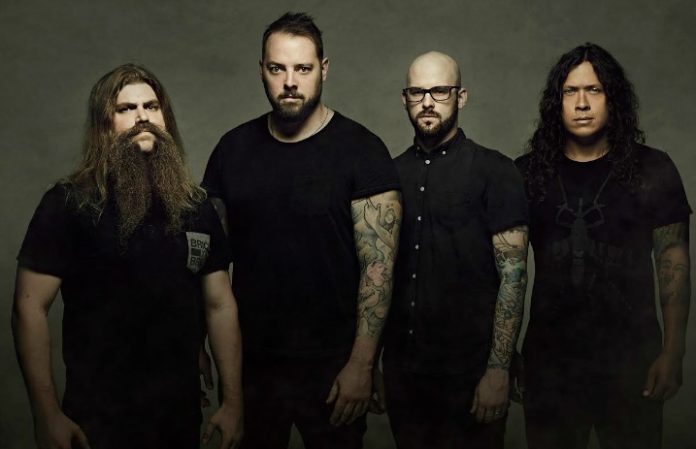 With Wovenwar’s sophomore release, Honor Is Dead, the metalcore unit have seriously upped the aggressive ante. With a far more in-your-face sound and vocalist Shane Blay injecting some serious screaming amidst the towering choruses, it will surely initiate frantic moshing across the land. With guitarist Phil Sgrosso announcing his departure before the album’s release, the remaining members are venturing further into new territory as a four-piece. AP caught up with drummer Jordan Mancino to get some insight into the recent happenings in the Wovenwar camp—and one of the essential releases of late 2016.

What happened with Phil deciding to leave the band?
JORDAN MANCINO: We just wanted to go in different directions, in terms of touring commitments. It was something that we talked about like adults and understood each other’s perspectives. Right now, because he was still a big part of the creative process making Honor Is Dead—and we’ve yet to tour—it feels like business as usual, but we’ll see how his absence affects things as we move forward.

Are you planning on bringing in a permanent replacement for him or taking a session musician out with you?
No, we actually want to handle it with just the four of us. Nick [Hipa] has got guitar duties down and Shane happens to be a great guitar player too, which puts us in a very good position. Once we decided to move forward that way and see how that goes, we felt good about it, and the four of us are just excited to get to play the new songs.

Has this change affected the dynamic of the band?
It’s yet to be determined! [Laughs.] We’ll find out once we begin touring, but everything’s good; we’re excited to see how it works out.

The sophomore album is a notoriously tricky beast. How were you feeling going into it?
We were very comfortable. We put out the first record without even playing one show, which was new territory for us, and I think after playing a couple hundred shows we got much more dialed in as a band. We created more of a connection creatively, and musically we’re tighter as a group, so writing a new record was a lot of fun. We were able to better refine and define what this band is, and I think with Shane being a bit more comfortable as a frontman and having really developed his skills—which are pretty mind-blowing—he took it to the next level. All of us did.

“Making heavy music is very comfortable for us.”

It’s a far darker and more aggressive album than your debut. Where’s that coming from?
It’s just what we wanted to do. It’s one thing to achieve a new sound—which we did—but I think all the touring helped us feel out how these parts were translating live, and many metal bands use that as their creative barometer. Making heavy music is very comfortable for us.

Having featured only melodic vocals on your debut, were you all on the same page when it came to introducing Shane’s screaming this time around?
I think it was just a case of seeing what happened. This is the first time he’s been in this position since he’s always been a guitar player first and foremost. And as I mentioned over the last album cycle, he’s started to feel really comfortable being up front and finding his inner abilities. We just let him do his thing, and he was awesome.

“Ultimately, we wanted the best possible results, and we got them.”

You tracked the record in different studios and often completely different cities to one another. Did that affect the dynamic, not actually being in the studio together?
Yes and no. There are a zillion different ways to write and record an album, and this made the most sense. It gave us the ability to refine the songs well beforehand, and when it was time to get into the studio it was the most efficient way to work. There was not too much to deliberate over, it was just a case of executing the parts as well as we possibly could, and Josh [Gilbert, bass/vocals] actually recorded and engineered Shane’s parts, so having two awesome vocalists working together really mattered. Ultimately, we wanted the best possible results, and we got them.

Do you worry that some people might listen to the new record and think that bringing in the screams was a more cynical move, to try to win back some of the As I Lay Dying fans turned off by the first record?
No, that’s nothing to concern ourselves with. There will always be comparisons made, of course, but this is a different band, and it’s a different band for a reason, and we’re just doing what we’re doing without worrying about anything like that.