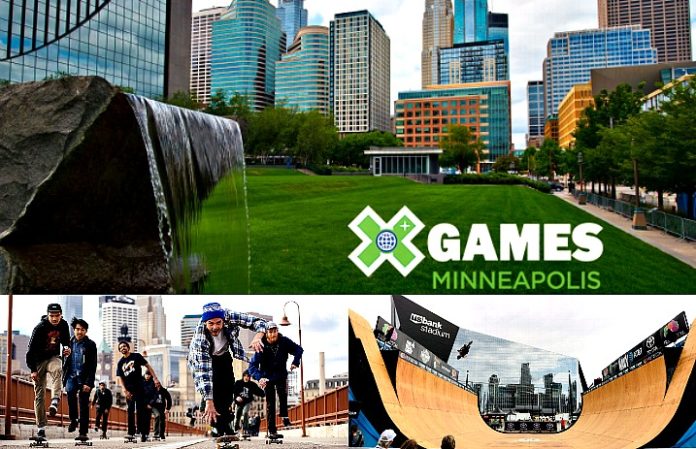 This summer, from July 13 through 16, the X Games are gearing up for their first-ever trip to Minneapolis, Minnesota where dozens of athletes will have the chance to compete for gold in and around the state-of-the-art U.S. Bank Stadium. Bringing together the brightest names in skateboarding, BMX and motocross, numerous events will highlight a number of disciplines, age groups and even first-time podium appearances. From the young girls and boys to action sport's seasoned vets, here are 13 athletes you oughta keep your eye on this weekend.

Read more: If All Time Low were athletes, which sports and positions would they play?

Even a casual X Games viewer wouldn't fail to recognize Nyjah Huston, who has been a constant force in the sport for over a decade now. Huston has absolutely wreaked havoc on other street skaters since 2009, placing on the podium in each of the previous 12 consecutive competitions, including a staggering eight gold medal runs. At the mere age of 22, Huston doesn't seem to be slowing down any time soon, as he goes to work out of a training facility of his own each day, and he's even been dabbling in motocross and racing a BMW as of late. Expect Huston to show up polished in Minneapolis, as arguably skateboarding's most talented rider will be pushing the pace on the street course.

One of the most exciting up-and-coming faces in women's skateboarding is 24-year-old Lizzie Armanto, who saw her rise begin when she took home the gold in Barcelona back in 2013. Now four years later and coming off her runner-up finish in Austin, Texas a year ago, Armanto has a lot of positive momentum at her back. At the end of 2016, she was signed by Tony Hawk's Birdhouse team, along with being featured on the cover of TransWorld SKATEboarding magazine. This year she's already graced the cover of the ever-popular Thrasher Magazine, in addition to picking up sponsorships from non-skating brands like Target and Kellog's, the latter for which she even appeared in an add for Frosted Flakes. Serving as an inspiration to tons of young girls who are aspiring professional skateboarders, Armanto will look to put on a show diverse skillset in the park competition.

Fresh off his X Games Real Street edit earlier this year (see video above), Ishod Wair is looking to build off of his 2016 bronze street finish in Austin. Though it was only his first podium finish in nine games, Wair is no stranger to bringing diversity to the arena. Even though he has mainly skated the street course in years past, he will perform double duty this year by competining in the park event as well. Wair was also Thrasher Magazine's Skater of the Year back in 2013, which established his balance between ruggedness and technicality. Coming off his tour around Europe at the prime age of 25, Wair will aim to bring his enhanced arsenal of tricks to the show.

Don't overlook this year's youngest X Games competitor, as 12-year-old Brighton Zeuner has already begun to take the women's skateboarding world by storm. First competing last summer in Austin at age 11, Zeuner just missed a podium spot in her debut after finishing fourth in the park competition; and regardless of not receiving hardware, this was an astonishing feat for the youngest woman to ever hit the course. Sporting stickers, painted nails and even braces, this young lady remains unafraid of taking her talents to new heights, with veteran vert pros such as Jeff Grosso even calling her a “powerhouse.” Thanks to her private tutoring, Zeuner is able to compete at the highest level, and this year in Minneapolis, she may even find her way onto the podium.

One of a handful of skating legends in the field along with Bucky Lasek, Andy MacDonald and Jake Brown, vert legend Bob Burnquist is unequivically one of the most enthralling skaters to have ever walked the planet. The Brazilian native is the most decorated athlete in X Games history, with 30 total medals, and will be the only athlete remaining to have competed at every previous summer X Games competition. Burnquist has also single-handedly dominated the Big Air event since its inception in 2004, taking home eight golds in the discipline. With the 40-year-old seemingly having nothing left to prove, that doesn't mean he isn't still riding strong, as the all-time great has both a vert and mega ramp in his own personal backyard.

Whether the surface is dirt or concrete, Gold Coast, Australia's Kyle Baldock is up for the task. First catapulting his X Games career by scoring golds in both disciplines back in 2013's games in Foz do Iguaçu, Brazil, he joined the exclusive ranks of fellow riders like Dave Mirra, Ryan Nyquist and Jay Miron, who were the few to also compete in both elements. Baldock most recently grabbed the dirt gold in 2015, and although he hasn't won another park gold since Foz, he did win BMX best trick in Austin last year. A big regiment for the five-time gold medalist is spending an hour and a half each day in the gym in order to keep his body up to par for the varying conditions, as well as the competition.

San Diego's Chad Kerley packs a large punch for a guy standing at 5'4″ — and the whole street field knows it. CK has been the only competitor to knock off Garrett Reynolds from the top spot on the podium back in 2013 in Los Angeles; and although he hasn't experienced ideal finishes since, he still maintains a level of consistency that makes him one of the toughest competitors in the lineup. He was also one of the athletes who produced an X Games Real Street edit just last month where he was able to showcase his complex manual abilities on an array of various lines. Despite his infectious attitude, Kerley remains a fierce competitor, who is likely to lay it all on the line come show time.

CONTINUED ON NEXT PAGE: MORE BMX AND MOTO X