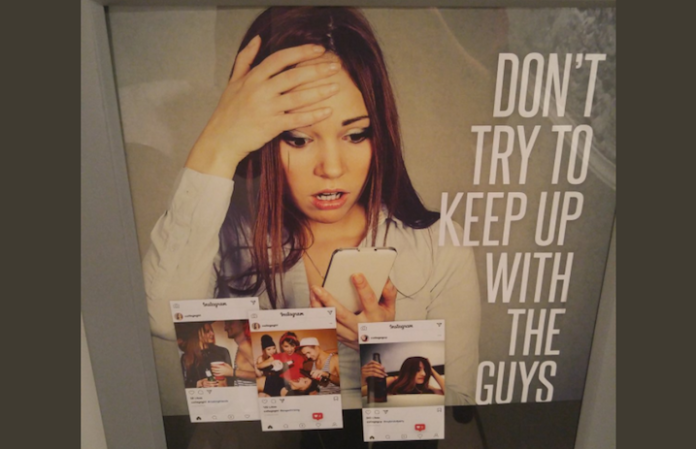 It’s the start of a new school year, which means that, inevitably, there will be incoming student orientations at various colleges across the nation. Trying to establish ground rules and expectations between school and student is a biggie, so it’s to be expected that incoming freshman will be posting about what new guidelines are being thrown at them, possibly with several eye-roll emojis attached. What these new students, like the ones at York University in Canada, didn’t sign up for was a biased and implicitly sexist lecture about the perils of drinking.

“Don’t try to keep up with the guys,” was the recently revealed tagline of one particularly damning poster, released as part of a campaign at York University aimed to warn students of the perils of binge drinking. Because the drinking age in Toronto is 18, it’s to be expected the incoming freshmen will indulge (although, frankly, this tendency to indulge is international) so it’s understandable the university would want to take some precautions. But rather than using a more universal meaning for the term “guys” and featuring folks of all identities on their posters, York University chose to target women. Can a poster pre-shame someone before they’ve even done anything? Because if so, York University flippin’ nailed it.

How on earth was this campaign approved? @YorkRegionGovt paying for ads shaming young women and victim-blaming. pic.twitter.com/ghjp9nU394

The poster is clearly aimed at and intended to focus on reining in young women who will be partying just as hard as the guys at college. Showing a young woman looking at one “bad” Instagram photo of her chugging booze that her friends pour into her mouth and clearly reacting in an appalled manner, the ad is, well, bullshit. First off, there’s the low-key connection between dressing in revealing clothing (the girl is wearing a crop top in the “bad” photo) and somehow inviting bad things to happen to you, versus dressing in a more “appropriate” manner (the same girl, now reacting to the shot, is wearing a long-sleeve button-up shirt) and being the innocent party. That’s perhaps the biggest sign this poster is intended to police the behavior of young women without commenting on the responsibility of men in a similar situation.

But more than that, it’s the simple fact that this poster is signaling to us that the age-old adage “boys will be boys” is alive and well, that their tendency to binge drink and be fine is some dumb biological reward for being born male. But it also signals to women that they are automatically at fault for whatever happens to them if they choose to drink alcohol, which can lead to a dangerous pattern of not reporting sexual assaults on campus or even promoting on an unconscious level to would-be predators that they will be absolved of wrongdoing because their next victim will be in the wrong.

@YRP thanks for letting York students know not to report their sexual assaults to you by victim blaming them before it even happens! pic.twitter.com/VIxnCS10on

This is a dangerous ad, through and through. It is also completely ignorant of the very real and dangerous fallout this could have for the reasons previously mentioned. It’s also ignorant to the fact that college campus are a primary hunting ground for sexual predators. Information provided by the Rape, Abuse & Incest National Network (RAINN) states all women are vulnerable to sexual assault or rape, but women ages 18 to 24 in college are three times more likely to to become victims of sexual assault or rape on campus. RAINN’s stats also point out around 11.2 percent of students of both genders experience sexual assault or rape through physical force, violence or incapacitation. Even more astounding, RAINN reports that only 20 percent of women — who were actually willing to comment for this survey, mind you — report what has happened to them. This number could be greater, but we may never know, if only because women are conditioned by society to take the blame for something, like sexual assault, which they had no choice in. It should be noted that, unfortunately, these facts stick to a binary gender system, excluding those who identify outside male or female; it is unclear what the percentage of gender nonconforming students who experience on-campus assault really is.

We recently received feedback about one of our campaigns. We take this feedback seriously and will suspend this campaign immediately. pic.twitter.com/8nu2vBgLds

Even though York Region, the group responsible for the ads, apologized after the swift and immediate backlash (see the tweet above), their gesture is pretty pathetic. While they say “sorry,” they also temper their apology with the excuse that they were concerned for women because they “want to raise awareness that even when women drink the same amount as men, women absorb and metabolize alcohol differently.” Even more shocking, York Region goes on to explain that “[w]omen are often at great risk because they often weigh less, have more fat tissue, less water in their bodies, and lower levels of enzymes that break down alcohol.” Are. You. Kidding. Me?

Aside from not backing these claims up with facts, despite that it is true men and women process alcohol differently, the apology is condescendingly ignorant and still doesn’t blatantly state that men need to be held accountable. It’s the one way this problem could have been quickly fixed — acknowledging the culpability of men in this situation — and things might have been smoothed out a bit better. All it would have taken was a few lines, some well-placed words and a clear message that men are responsible for their actions, too, and that they should also be mindful of what they drink, if only to avoid embarrassment the next day. Or, you know, this ad could have just never been made at all, because from the optics standpoint, it just looks ridiculously regressive.

But instead of men being told not to drink too much and engage in criminal behavior like sexual assault, a new incoming class of young women are being fed the same sexist nonsense that can send them into a victim-blaming mindset. It’s tired, it’s infuriating — and it’s time to change the rhetoric.

What are your thoughts on these posters? Sound off in the comments.