You, Me, And Everyone We Know are back. After more than three years since announcing their breakup, the group founded and led by Ben Liebsch has shared a new song, “(Still) Basically A God,” and announced plans for a reunion show in Lancaster, Pennsylvania, that sold out within two hours. We can now exclusively confirm a second performance is taking place Dec. 28 at Lancaster’s Kaleidoscope.

In the time since You, Me, And Everyone We Know said goodbye in 2016 (only reuniting for a February 2017 performance in Chicago—a benefit for photographer Ashley Osborn), Liebsch worked hard on his personal development.

Read more: 25 music moments that made us thankful 2019 turned into 20ninescene

“After the band ended, I delivered flowers for a living. I would curse myself for taking a job that mirrored the one part of touring that I hated the most,” he explains. “I was just sitting in a car for hours on end munching on garbage food and my own boredom. I decided to redirect my life a bit and took a job at the front desk of a gym that opened here in downtown Lancaster. The original owners were unable to continue running the gym due to some health issues, but they didn’t want to close, so I was asked to take over and continue their vision.”

Liebsch will be the first to tell you he didn’t plan on returning to music, believing the benefit performance would be his last time playing under the moniker.

“I’ve dealt with a lot of mental health issues over the years, including anxiety and depression, and I’ve now been diagnosed with chronic post-traumatic stress disorder,” he reveals. “I thought in order to move past my trauma, whether it be from my childhood or what I’ve experienced in the music industry, I had to move past the band. The night before the show in Chicago, Zech [Pluister] from Sleep On It sat me down and asked if I was sure about the decision. What I was sure of was the fact that I didn’t want to feel that way anymore, and the only way I could do that, in my mind, was to stop playing music.”

Read more: You, Me And Everyone We Know release surprise ‘A Mutty Christmas’ EP

However, Liebsch soon discovered that leaving music wasn’t a solution and opted to start going to therapy rather than give up his passion.

“I was coping a lot through food and energy drinks,” he continues. “Just managing, really, and by that, I mean surviving. I was full-on coming into my own as a personal trainer and digging into the lifestyle of business ownership as a way to keep myself busy and distracted. I was working too much while trying to deal with everything, and then I was retraumatized. Anyone familiar with PTSD knows there is a whole litany of symptoms that are not just mental, but physical, and it all came to a head last December when a broom fell in my bathroom. My body was so overwhelmed by stress and physical activity that it just hit a hard shutdown button. I woke up on the floor five minutes later with blood everywhere, and I quickly realized I was exhibiting the signs of a concussion. That is when things with music picked up again.”

BEN LIEBSCH: After the concussion, I couldn’t work for two to three months. No matter how much I reduced my workload, I basically had to lay in a dark room and let my brain heal. At the same time, I started seeing a trauma therapist who diagnosed me with what is essentially two steps away from multiple personality disorder. We don’t have to get into the science of that, but while all that was unfolding, I read this book by Pete Holmes called Comedy Sex God. It was something I picked up intending to enjoy casually, but there was something in it that flicked a switch on for me that lead to a pretty radical spiritual awakening. I found a sudden, deep and very lasting peace with my place in the universe. I came to terms with my past and my theoretical future. Through all of the reading and contemplation, not to mention the therapy, my PTSD symptoms started to subside. I haven’t had flashbacks or anything, which is surprising to me.

Anyway, after that happened, I started to feel like an antenna. Whatever I was trying to tune into became clearer, and that is when I started writing again.

I’ve always told my therapists that whenever I’m performing, I sort of disappear. There is a loss of self and ego in those moments where I become a part of what is happening in the room. Ram Dass, one of the people I discovered through reading Comedy Sex God, says that feeling of losing oneself is something to be cherished. The work we do to reach that point is important, and I realized that if music is my way to get there, then I needed to find a way to do that without hurting my physical or mental health.

With all that in mind, what is your approach now? What does it mean having the band back together, and where do you go from here?

I’ve been taking some cues from what is happening in underground hip-hop right now. My focus is on using the band to enrich the lives of others and those around me. We’re recording everything ourselves out of The Kaleidoscope, which is also where we are playing our first shows. We’re doing that because I want to curate a special experience because it is a long time coming that we are at this point. I want to make everything we do feel special to the people who care about this band. We’re only going to release one or two songs at a time, and any merch or recording we put up for sale will be incredibly limited. We want to do cool stuff that we are proud of that people will enjoy.

Your latest publicity photo features a blurred image of you. What was the motivation for that decision, and how does it speak to the look of YMAEWK moving forward?

Everything moving forward is about removing the traditional ego bathing that musicians partake in either intentionally or without realizing it. With that in mind, our image is going to be less about the individuals in the band and more about a full realization of the band’s name. You’re a part of it. I’m a part of it. Everyone we know is a part of it. The band is a concept that is just now being fully realized, and that is what makes me most excited. It’s not about us onstage, but it’s about all of us being in this together. I want to put a heavy emphasis on that.

You put out a new song titled “(Still) Basically A God” in early November. Can we expect more music soon? Perhaps another version of that track?

I really didn’t expect the attention we received for that song. One of my flaws is underestimating my work, which is some old scripts we’re trying to break. We just wanted to share something with people who joined our mailing list, and it just took off from there.

The first loud song, if you will, should be out before our show on Dec. 20 here in Lancaster. That show is already sold out, which again was unexpected, but we are adding a second date on the 27th at the same venue. It’s a really small space, and we chose the venue intentionally to try and create an experience for people who attend. There are folks flying across the country to see us, and we want to ensure they will see something they couldn’t experience in a bigger space. We want to move with intention rather than soaking up all the dollars we can.

Some fans have pointed out that your debut full-length, Some Things Don’t Wash Out, turns 10 in 2020. Is it a coincidence that you’re returning ahead of that anniversary, or is that part of a bigger plan?

It wasn’t really planned. I went to the rest of the band and brought them my ideas. I brought up the structure I told you about and how, hopefully, we can make it sustainable for everybody. We all have jobs and lives, so we’re not planning to go on tour and break ourselves to the point of needing treatment again.

It’s interesting that our culture waits 10 years to celebrate records these days. I also think it’s very strange that I, as a 35-year-old, am considered washed up. Maybe that is another one of those old scripts playing in my head, but it’s something I think about. This scene, and we have never been a strictly pop-punk band, but this scene tends to consider people washed up after they turn 30. Comedians, on the other hand, are rarely considered to be “in their prime” before the age of 40. I’m hoping we can challenge those dynamics to one extent or another, but we shall see.

Considering the size of the venue and the timing of the shows, it’s likely many YMAEWK fans won’t be able to attend your upcoming Lancaster performances. Do you have more gigs planned for 2020?

Touring is not going to happen unless someone comes to the band with an offer [that] replaces all of our incomes. The music industry has been historically unwilling to do that for any band, let alone my little enterprise here. In all likelihood, we will be playing roughly six shows a year. We may do more if something exciting comes our way, but right now, that’s our plan.

I really want to focus on helping others. We want to put on an annual benefit in a different city to stick with our theme of helping others through music as much as possible. We are eyeballing some of our more popular cities for next summer, and hopefully we can build from that.

It’s also possible that I may do some solo shows. I’m open to all things except for becoming unwell mentally again. I don’t have great concerns about that after the last couple of months. But again, if there is a chance I’ll be getting four hours of sleep per night and eating shit to survive, then you can count me out. But I’m not opposed to playing solo. You might catch me in the Northwest doing a gig by myself.

I’ll go anywhere if you give us the chance to replace the money we would make from work. It may surprise some of your readers. But the musicians you enjoy probably have jobs that they have to take vacation time from in order to perform.

Tickets for You, Me, And Everyone We Know’s Dec. 28 show at Lancaster’s Kaleidoscope is on sale now here. You can keep up with the band on Facebook, Instagram and Spotify. 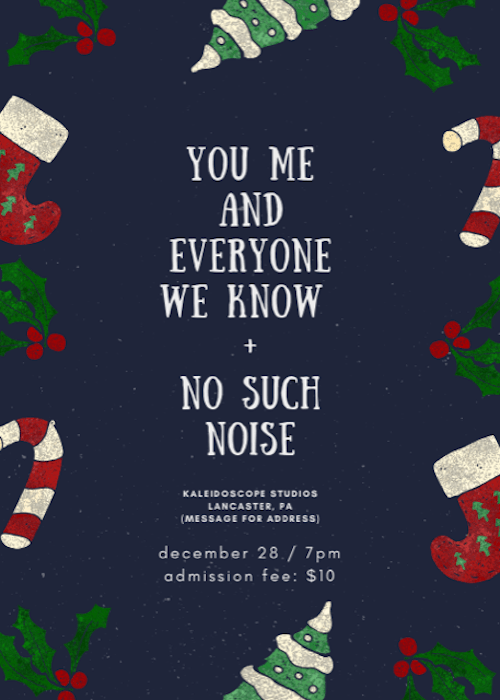