Coming off the October release of their sixth studio album, fittingly named VI, You Me At Six are returning to the U.S. for their first nationwide tour in years.

Aside from a handful of one-offs and festival dates in 2017 and 2015, the band haven’t made an extended run through the states in a while, and they’re excited to be back.

“There’s so many things we love about coming here, so [we] just can’t wait to come back and play shows,” frontman Josh Franceschi says.

Taking its name from one of the first singles released off VI, the Back Again tour holds an obvious double meaning as the band return stateside.

“I guess we just thought it was funny, considering a bunch of our fans thought we weren’t ever going to come back,” Franceschi says.

After receiving mixed reviews for their 2017 album Night People, the band exploded from a crossroads for VI.

Franceschi says they won’t be forgetting the classics on the tour. However, they’ll be bringing plenty of their newest jams that they believe fans will love after hearing them live.

“We’re playing a whole host of songs from across our six records, including a bunch from VI too,” he explains. “Some songs we’ve also never played, as well as what we believe to be fan favorites.”

The band looked to explore in the new album, spanning multiple genres that they want to continue to work with as they continue as a self-signed band.

“Ultimately, we wanted to try to progress our sound a bit further and include elements of other genres that we enjoy, whether that be dance and electronic or hip-hop and R&B,” Franceschi says. “We always want to maintain our DNA, but fundamentally, You Me At Six will always have that as long as it’s us five being true to ourselves with our songwriting.”

Franceschi says he has a message for fans joining them on tour.

“We’ve landed, we’re here and we can’t wait to see you all,” he says. “Let’s have a bloody good time together!”

You Me At Six hit Gramercy Theatre in New York City Feb. 22 and are sharing an inside look at the tour. Check it out below. 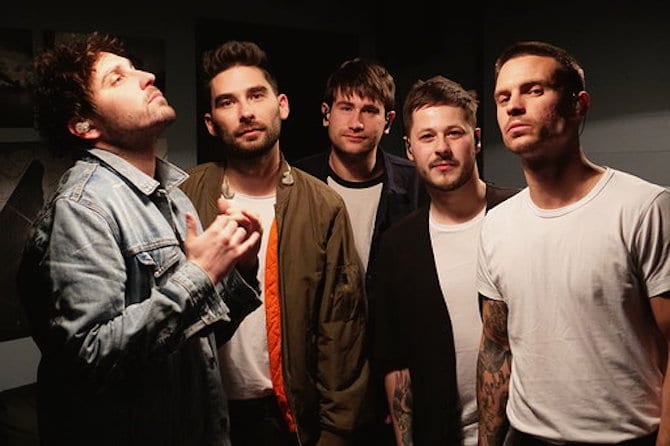 VI is available now, and You Me At Six will be out in the U.S. with DREAMERS and machineheart through mid-March. Check out dates for the Back Again tour below, and grab your tickets here.