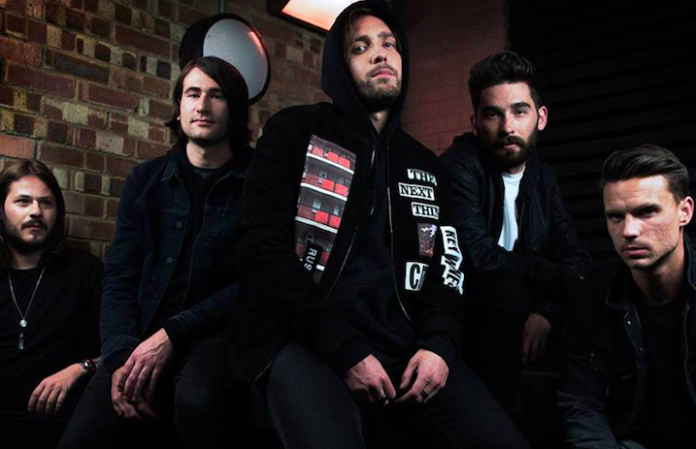 It’s been awhile since America and You Me At Six have seen each other. The Surrey-natives’ most recent tour here was back in 2014, in support of their second to last album, Cavalier Youth.

Since then, the band have taken some time off, recouped, came back refreshed and released the chart-topping Night People in early January. “Give” was the third single from the record—a standout track showcasing frontman Josh Franceschi’s versatile vocals, exemplified in a powerful chorus that will get stuck in your head for days. The new video for “Give” shows You Me At Six performing at the legendary Shepherd’s Bush Empire venue, which the band hit for the first time during their run of the U.K. late last year.

“Originally, it wasn’t meant to be a music video, so to speak,” says vocalist Josh Franceschi. “It was meant to be us having footage and the content for that song. I think as the label and America settled with it more, they thought it would work as a cool first video for the track. I think it’s a beautiful venue, Shepherd’s Bush, and I think you can really see that in the music video.”

Night People is You Me At Six’s fifth album, recorded with Grammy Award-winning producer Jacquire King at Blackbird Studio in Nashville, Tennessee. There was almost exactly three years between Cavalier Youth and Night People, during which the band went almost completely dark.

“I think it’s a beautiful venue, Shepherd’s Bush, and I think you can really see that in the music video.”

“Ultimately, at the end of the Cavalier Youth cycle, we all took a few months to regroup and chill,” he explains. “The band, for a few months, was put on the backburner.”

This was the first time You Me At Six took a real break since they formed back in 2004, when Franceschi was still well in his teens.

“But, also, it got to the point where my early 20s have just completely flashed by,” he elaborates. “I wanted to stop and take stock and appreciate what it is that this band has and what we think we’re good at and what we think we need to get better at.”

For Franceschi, that meant improving on his voice through vocal lessons. “We all took different aspects of what it is we do and focused to try and get better at our instruments and our crafts,” he says.

He continues: “The break was necessary to appreciate the things we had, to get off the ride for a little bit. Sometimes it’s important, so that when you go back into it, from a fan perspective, you’re getting the best version of You Me At Six, whether that be when you listen to them or see them play live.”

TAKE ON THE WORLD

Leading up to Night People, the band would gather at drummer Dan Flint’s house, which has a recording studio. They eventually went to Sheffield and began demoing with producer Ross Orton, credited for work on Arctic Monkey’s AM.

“We loved working with Ross—he was a cool guy,” he says. “But out of that process we knew that we were necessarily going down the right route—musically, mentally, everything.”

“From a fan perspective, you’re getting the best version of You Me At Six.”

Finally, You Me At Six were put into contact with Jacquire King.

Franceschi describes the recording process of Night People as “very, very focused,” unlike when they recorded in California, where they did the previous two albums, Cavalier Youth and 2011’s Sinners Never Sleep.

“It wasn’t like when we made records in California, where we were socializing and partying and having friends and partners come out and stay,” he says. “We put a lot of time, a lot of dedication into [Night People] and what we were doing.”

Read more: Check out all the times your favorite bands were on Innuendo Bingo—watch

The band also shut off their social media during that time, which, Franceschi says, was an effort to eliminate all distractions, even from other bands. They didn’t even listen to the radio or any other rock records.

“In general, we listened to lot of hip-hop, a lot of grime—U.K. grime—a lot of soul and funk music and stuff that wasn’t us,” he explains. “I think, in a way, that contributed to what has become good about You Me At Six and this record.”

Night People went in mid-week at No. 1 on the U.K. charts, eventually sitting at No. 3 by the week’s end. To Franceschi, this was a huge surprise.

“I honestly didn’t think that we would get anywhere near the top 10 in England with the album, because I’ve seen the bands that I’ve grown up loving and how after 10 years there’s not many of them penetrating the mainstream in that sense,” he says. “I was just very sure of the fact that we wouldn’t either.”

“We put a lot of time, a lot of dedication into the record and what we were doing.”

Another accolade that came as a surprise to You Me At Six happened at this past summer’s APMAs, where the band took home the Skully for Best International Band.

“That was one of those awards where I thought: ‘I don’t understand why people are even bothered about what our band are doing now, let alone voting for us at an awards ceremony,’” Franceschi says. “That made me think that maybe in North America there’s a time now for You Me At Six to really come and make sure people who have invested their love and energy into this band, that we can really give it back more than we ever have.”

“It’s just an exciting record for us,” he continues. “I think this is the record that’s been received the best in America so far in terms of people reacting online and people listening to it and streaming it and buying it.”

To that end, Franceschi and co. have big plans for the U.S. with this album cycle. They’ll be hitting the States on a tour this spring/summer, with details to come.

To all our fans, thanks for the good vibes and support for #NightPeople. See you on the tour! �� Ed Miles for @diymagazine

“One of our favorite tours of all time was the Spring Fever Tour, and, of course, we were on a great, great bill with great friends. And yes, the shows were massive, and that’s great when you go and play massive shows,” he says. “But what’s cool is that was the first time I‘ve been in America, and felt like there was a spark happening for You Me At Six.”

“We’ve been thinking about doing that, and trying to line it all up. The problem is that because we’re probably the smallest band out of the four that did it in the first place, we can’t really call the shots.

“If I could get people excited about the idea and if they want to do it—I think both the guys in All Time Low and Pierce The Veil, and I’m sure the same can be said for Mayday Parade—we wouldn’t even think about it. We’d be on it straight away.”

Watch You Me At Six’s new video for “Give” below.