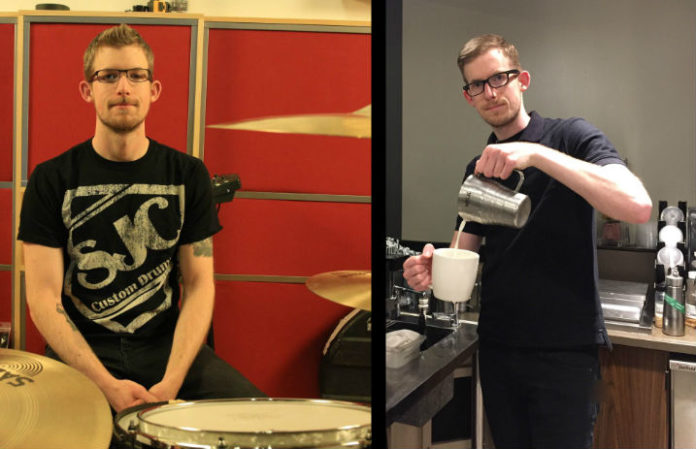 I’ve found what I believe to be the happy medium to pursuing my dreams. Instead of dropping everything and forgoing my main source of income, I’ve been easing off working and dedicating more time to the things I love. For example, although my main band broke up, I’ve recently become active again as a touring hired gun drummer. I work between tours, but I make sure I give enough notice before I leave again.

Ideally, if I was able to continue making money as a touring drummer I would phase out my current job, but I’m doing my best to balance everything in a way that’s healthy and realistic. This doesn’t just apply to musicians; it applies to all creatives and dreamers. You won’t get closer to your goal if you don’t ease into it. The older we get, the harder it is to drop everything, but it doesn’t mean you can’t plan it out and make things happen one piece at a time.

Currently I’m playing shows with No Trigger and doing the fall tour with the Early November, followed by a tour with Baggage.

Ideally if I was able to continue making money as a touring drummer I would phase out my current job, but I’m doing my best to balance everything in a way that’s healthy and realistic. This doesn’t just apply to musicians, it applies to all creatives and dreamers. You won’t get closer to your goal if you don’t ease into it. The older we get, the harder it is to drop everything, but it doesn’t mean you can’t plan it out and make things happen one piece at a time.

I was fortunate enough that touring in my band, the Swellers, was able to support me for nearly a decade until I had to finally get my first “real” job. I worked at Guitar Center for two years, and then my band broke up. I quit my job to pursue writing and develop my new band, Baggage. For over a year wrote articles, drummed on albums and toured with other bands to make just enough to pay rent (which is easy to do when you live near Flint, Michigan). About a month ago, I decided it was time to get a job again—something I’ve been dreading for a long time.

It may be the musician in me, but there’s this strange sense of pride I had when I was able to make money solely from music. I got to tell people I was a professional musician, something I dreamed of as a kid. By getting a job, I felt like I would be giving up on that or becoming some sort of “has been.” That thought was pretty brutal for me. My girlfriend worked hard at a bar making good money while I sat around in my pajamas at home writing songs or goofing around on Twitter. The closer I got to 30, the more I realized I needed to get my ass in gear and put my pride aside. I wasn’t making money, I was just making enough to pay my bills—nothing close to saving for a future. Talks of getting a house, eventually getting married and the pressure of your run-of-the-mill adult shit began to set in.

For some reason, it took being excruciatingly bored and these strange anxiety spells to make me realize that almost all of my other friends in small to mid-sized bands have always had jobs. They could take days off or trade shifts to play local shows on the weekends. A flexible, part-time position can allow you to take weeks off to go on tour and give you the same amount of hours when you get back. Worst case scenario, I could just quit a job that wouldn’t help me out. In retrospect, I could have had a job this last year and been making more, consistent money and still have gotten my band to where we are now.

“By getting a job, you’re not giving up.”

It took a lot of deep thinking to finally calm down and come to the conclusion that your job doesn’t define you. By getting a job, you’re not giving up. It seems we tend to forget that getting a job can fund our hobbies and passions—it doesn’t necessarily have to be one of them. Sometimes you need to make money on the side to get something off the ground, like a new band, a clothing line or any kind of business venture. It’s about setting goals, saving money and making a realistic timeline. If you hit a deadline in life and you’re not where you’d like to be, then that’s the right time to reconsider and prioritize. That doesn’t mean you have to give up on your dream. It never does.

There are some people who have a career and don’t have any sort of extracurricular passion. They’re totally fine with their jobs. The second you punch out, you get to be yourself again. You get to go back to your home, your family and your belongings. Now that you’ve made enough money to get by, you can pretty much do whatever you want. You get to be you and I strongly urge you to take that to heart.

You see, I made the mistake of making excuses instead of being proactive. I think a lot of people do that. I was under the impression that before I put in the hard work, something would just happen for my career. It’s like hoping you get a package on your doorstep even though you didn’t order anything. Not having a job wasn’t proof that I was dedicated to music; it was quite the opposite. I was lacking financial stability and living with a weird, “I’ll prove them all wrong” mentality. Now I serve coffee to make consistent money, but that isn’t all of me. Always fight to do what you’re passionate about, but don’t let having to settle for a job deter you from aspiring to bigger things. Your job does not define you unless you want it to.

Check out Baggage on Bandcamp.

This article was originally published May 2016 and updated September 2017.