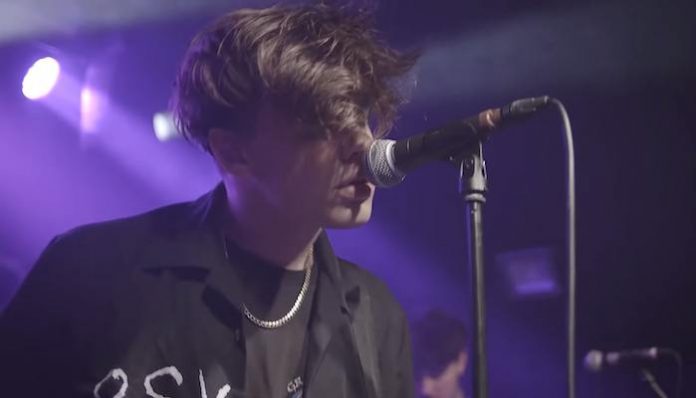 Like many artists in the current state of the music scene, YUNGBLUD smashes through the constraints of cookie-cutter genre barriers. Melding clear influences from alternative and hip-hop artists before him, the British bred frontman pulls in audiences through high-energy performances and songs with a message.

YUNGBLUD (aka Dom Harrison) put his diverse taste on display by creating a mashup of Nirvana’s “Heart-Shaped Box,” Juice WRLD’s “Lucid Dreams” and Ariana Grande’s “God is a woman.” He partnered with AP to premiere a clip of the performance, and we are so here for it.

Despite the diversity of the selections, Harrison says it just made sense. “I mashed these three songs up because together they represent my sound,” he explains. “I grew up on classic rock ’n’ roll records like ‘Heart-Shaped Box.’”

“I discovered hip-hop and became obsessed with the two genres simultaneously,” he continues. “And I am also a massive pop music fan. It just makes sense to me that these genres should sit side by side and quit fighting each other.”

Harrison previously played the melded tracks on Radio 1’s Indie Show with Jack Saunders for the Maida Vale Mashup. However, days later, he brought it back to life at soundcheck prior to his sold-out show at London’s iconic The Garage venue.

Check out the intimate performance below.

YUNGBLUD’s latest 21st Century Liability is out now, and he’s currently on tour in the U.S. Dates are below, and tickets and future tour plans can be viewed here.