When we think about influence in an age where anyone with access to the internet and a substantial following is dubbed as an “influencer,” I raise the question of what the requirements are on the topic. Influence has the capacity to have an effect on the character, development or behavior of someone or something—or the effect itself. A few folks come to mind, and Yves, better known as @The_YvesDropper, is definitely at the top of the list. 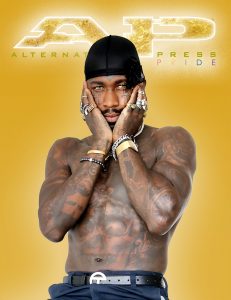 Yves began making waves on social media in 2013 after his blatant radical support of Black trans femmes made its rounds. His unique style and look caught the attention of not only the LGBTQIA+ community but major fashion designers such as Thom Browne, Burberry and Calvin Klein. While managing his newfound modeling career, Yves was still avid about his stance on both queer and racial issues, going so far as to spend personal funds to support intersectional Black Lives Matter initiatives last summer and being arrested and physically harmed while doing so.

Yves shows us every day what it means to validate and give amplification to the voices of the marginalized by highlighting them to his just about 250,000 followers on Instagram. Yves spoke with Alternative Press about what it’s like managing music, modeling and making changes.

Where do you find joy?

Honestly, I would say a bulk of the energy stems from support and knowing that no matter how down and stressed I am, there’s still someone out there who’s going to go hard for me. And knowing that it’s impossible for you to completely give up on yourself when you know that there’s someone out there who’s ready for you, who you may not even know. And something that really entices me and intrigues me and excites me when it comes to my work is knowing that there’s someone out there who maybe isn’t in a position yet to be doing this that wants to do it and sees themselves in me. So in a way, I’m putting on this smile for all of us, including the people who I haven’t even met.

To be able to champion folks who will never know that you exist sometimes, how does that make you feel? Just know that you’re doing the right thing on a regular basis.

I wish I could be surrounded by those people and love them and just take care of them every day. I also know that my mission in life is bigger than my life and what I think I’m supposed to do. Even though I’m mortal, the work that I put forth and the empathy that I show and the care will live on for generations and generations, even though I’m going to be gone.

I usually try to do it either at the beginning of the month or at the end of the month. The reason why I try to plan it that way is because I like to hopefully go into the month as optimistic as possible. Just because living our lives, especially as Black queer people, a calendar date is like a vapor. It’s just gone. You never know when something is going to happen to you or someone and throw you off guard.

You may have one plan to go do something one day, and, out of nowhere, everything changes. And that’s the reality for a lot of people, but I feel like for us specifically, we actually lived the reality. So it’s not just a conversation. It’s an actual action that takes place in our lives. I always say yes to everything. I think of myself as a supercharged battery, and I want to be utilized in every way that I can because I’m so capable.

What are some of the things that you enjoy most about the communities that you serve, with your platform and with your messaging?

For me, it’s the comfortability that people in our community have with me. Oh, my gosh. I’m not going to cry because of it, but whenever I go out or I’m somewhere, I go to a city or whatever, the way that our people talk to me is as if I woke up next to them in the bed. [It’s] just so casual.

How do you keep yourself grounded so you don’t ever lose that sense of familial community where you feel like you belong?

Part of keeping myself grounded is putting myself in those spaces voluntarily and going to where I know I have to pay to get in or going to a ball where I know I’m going to have to tip the girls. I shouldn’t be put to a different standard because of my job or my quote-unquote tax bracket. At the end of the day, strip all that away. I’m still Black and gay. So, to me, my job and where/what I do with my work is second. When it comes to community, it’s always going to be second. Being able to be in those spaces and let the girls shine and let the kids walk and let the boys [be] Vogue and just cheer them on, scream, and clap behind them as they’re doing it keeps me humble.

What does freedom look like for you at this moment?

Even if the question or the energy has nothing to do with trans people, I will make [it] about [the] trans [community] because it just isn’t talked about enough. It isn’t celebrated enough. And it isn’t mentioned enough by the mouths of people [who are] already trans people. And I’ve said it before: I had an interview, and I said Black people can’t be the only people advocating for Black people. [It’s] the same when it comes to transness. Trans people know what trans people need. I don’t think people understand that liberation for trans people means liberation for all. I can’t even entertain the word freedom for myself because the ones that I love the most aren’t free.

To end on a light note, I know that you’re also a musician. What type of music do you want to make, and what do you hope it says to the masses?

I want to make baby-making music and also make music that people can dance with their babies too.