If you’ve ever wondered what life on the road with Rise Against is like, then photographer Rob Fenn has you covered. Fenn and the band teamed up for 272-page photo book Whereabouts Unknown that features both onstage and behind-the-scenes moments.

A project four years in the making, Fenn met the band on the road through mutual friends involved with Rob Zombie. He first shot their live show at Metallica’s Orion Fest in Detroit, and the band were impressed with his work.

Read more: “My experiences at shows are like anyone else’s:” Wheelchair bound fan on circle pit, crowdsurfing

“After he shot a couple shows and we saw his work, we knew we weren’t dealing with your everyday photographer,” frontman Tim McIlrath says. “As someone who had been around bands for a long time, Rob knew how to capture the drama of the live show and the behind the scenes also.”

The feeling was mutual as Fenn was also impressed by the band’s live show.

“I [was] blown away by the energy of their live show—the way the fans react to their live show was unreal,” Fenn says. “The following year, I was out on tour with Rob Zombie, and Joe [Principe]’s bass tech Mike Frye was out with us working. I told him how much I dug the Rise Against live show, and how I thought it would make a great book. Fast-forward four years later and here we are.”

The four-year production process wasn’t entirely planned as Fenn originally only shot in the U.S.

“After shooting for a while in America, Rob had plenty of material for a book, but we insisted he follow us around the world because we knew that North America is only part of our story,” McIlrath says. “He needed to meet the whole family. It made the process take longer, but I think it paid off.”

Fenn didn’t mind the project extension, using his time with the band to learn more about the rock genre.

“It was so much fun chasing these guys around the world,” he says. “My favorite part about working with Rise Against is my new love for punk-rock music—hanging out with these guys was like going to punk-rock college. I learned so much about bands I never knew existed. I asked a million and one annoying questions, and they were cool enough to answer them all.”

The band weren’t phased by Fenn’s presence, which allowed for more candid photos as seen in the book.

“Rob became part of the family, which is why the book is such a complete document and captures a lot of the heart and soul of Rise Against,” McIlrath says. “He melted into the background, and we trusted his instincts.”

Head below to find out how you can win a copy of Whereabouts Unknown—including one of two signed by Fenn and Rise Against.

? GIVEAWAY ALERT! ? Be the first to name these 6 @riseagainst tracks and you could win one of two SIGNED @rob_fenn ‘Whereabouts Unknown’ photography books – good luck! pic.twitter.com/xlumYs5bZn 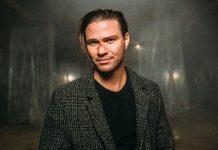 Tilian shares exclusive look at the “Is Anarchy A Good Hobby?” video 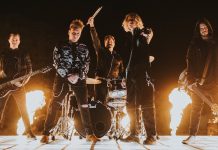 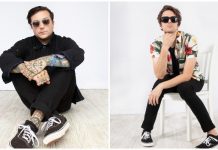