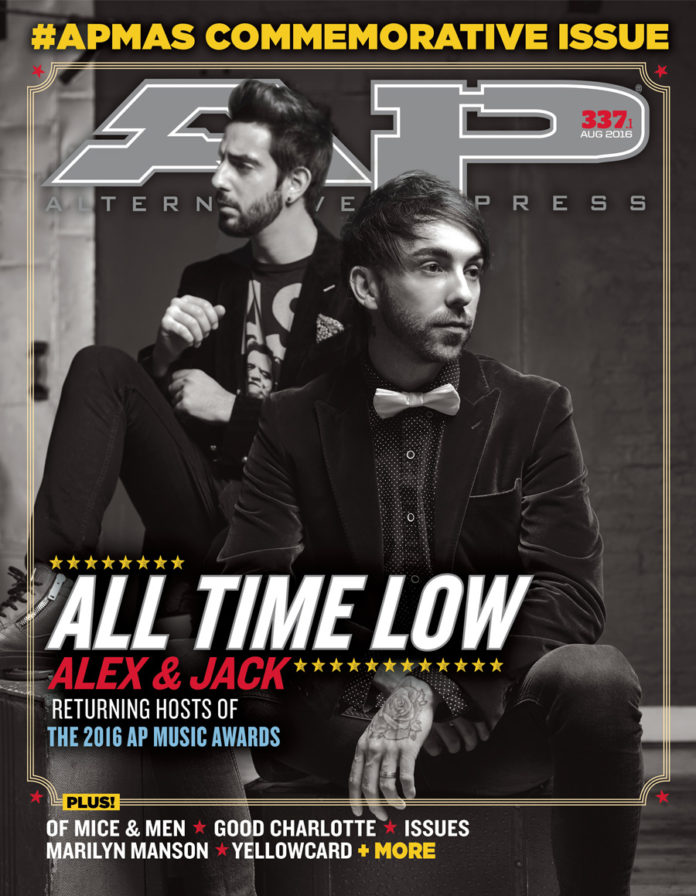 It’s your guide to the 2016 APMAs! With your hosts Jack & Alex from All Time Low, Of Mice & Men, Issues, Good Charlotte, Marilyn Manson, Yellowcard and all the sweet, sweet nominees!

THE ALTERNATIVE PRESS MUSIC AWARDS
While some people will be congregating in Cleveland (we aren’t legally allowed to print his name, but rhymes with “Shmonald Dump”), our punk- rock convention will be infiltrating Columbus. Hopefully you’ll be making the trip, but regardless—you’ve grabbed the right issue.

ARTIST OF THE YEAR
presented by MONSTER ENERGY

ALBUM OF THE YEAR
presented by JOURNEYS

OF MICE AND MEN
After a year off of the road to recover from health issues, OM&M weren’t sure where life was going to take them next. Now, they’re back with another album and a renewed vision for their future.

CLASSIC ALBUM AWARD
presented by ELEVEN SEVEN MUSIC
GOOD CHARLOTTE: Benji and Joel Madden roared back onto the scene last year and it hasn’t gone unnoticed. In addition to their most recent album Youth Authority, the Maddens and co. are stoked to accept the first Classic Album Award to honor their pop-punk legend LP, The Young And The Hopeless.

TYLER CARTER & MICHAEL BOHN of ISSUES
Issues weren’t sure how the follow-up to their debut would be received. Then again, they didn’t expect to win top honors at last year’s awards, and look how that turned out. The two frontmen dish on expectations, fashion sense and their new headspace.

YOUR HOSTS: ALEX & JACK of ALL TIME LOW
It’s a surprise to everyone that All Time Low’s Alex Gaskarth and Jack Barakat were invited back after the debauchery of last year. But hey, now the pair are running for president of the APMAs—against each other. Which way will you vote?

SONG OF THE YEAR
presented by EPITAPH RECORDS

VANS OFF THE WALL AWARD
presented by VANS
YELLOWCARD: These Warped Tour veterans have long lived their lives “off the wall.” But through their tireless work in the scene, they’ve inspired most of the up-and-comers in these pages to pick up instruments. If that’s not deserving of an award, what else could be?

ICON AWARD
presented by EQUALVISION RECORDS/MERCHNOW
MARILYN MANSON: In an industry that can often punish anyone who thinks outside of the status quo, Marilyn Manson defied all. Outspoken and controversial, he’s always willing to spit in the face of convention. Through both demeanor and demise, Manson is an icon to celebrate.

10 ESSENTIAL: ALBUM OF THE YEAR DEEP CUTS
presented by JOURNEYS