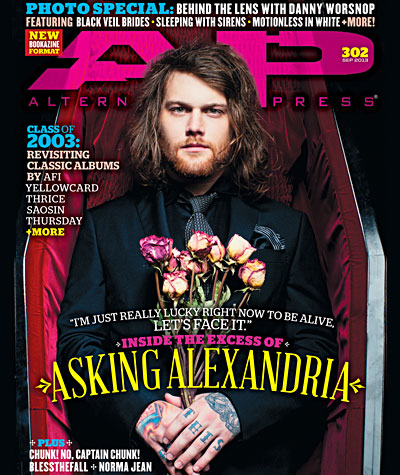 Sex, drugs and rock ‘n’ roll are all in a day’s work for Asking Alexandria. In this world-exclusive story, go behind the curtain to get all the dirt about the U.K. metalcore badboys and their new album.

ASKING ALEXANDRIA
Several years ago, ASKING ALEXANDRIA moved from the U.K. to a Walmart parking lot in search of their rock ’n’ roll dreams. But while their third album seems poised to take them even higher, other forces threaten to derail the whole process. Written by Ryan J. Downey

THE CLASS OF 2003
We revisit classic albums froms YELLOWCARD, THRICE, SAOSIN, AFI, THURSDAY, EVERY TIME I DIE and more.

10 ESSENTIAL
Reasons to give pop radio a chance.