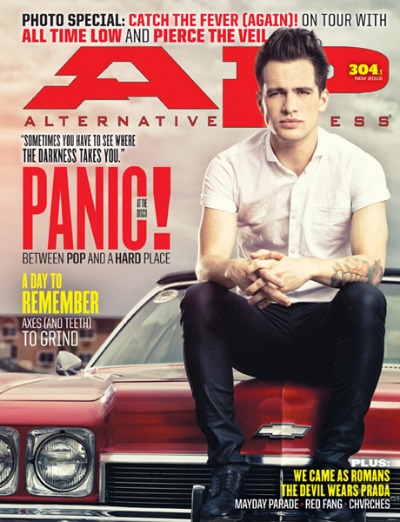 Brendon Urie used to be a singer who was given direction and expected to execute it. But thanks to (or in spite of) a series of events, he’s now calling all the shots.

PANIC! AT THE DISCO
Written by Evan Lucy
Brendon Urie used to be a singer in a successful pop band, given direction and expected to execute it. But thanks to (or in spite of) a series of events, he’s now calling all the shots.

A DAY TO REMEMBER
Written by Ryan J. Downey
The mighty Florida popcore team have returned to maintain their superior rock power—and fire off some loose cannons.

THE DEVIL WEARS PRADA
Written by Andrew Kelham
Instead of worrying about maintaining popularity, the men of Prada choose to make the music they want to hear. Get in their car.

WE CAME AS ROMANS
Written by Ryan J. Downey
The affable Michigan outfit have big ambitions and bigger dreams. Because when there are no dreams left, there’s no point to anything.

ALL TIME LOW & PIERCE THE VEIL PHOTO SPECIAL
Photos by Adam Elmakias
Miss one of the year’s biggest tours? No worries. We’ve got you covered with live shots and behind-the-scenes candids from the Spring Fever tour.

STYLE
Embrace your dark side this Halloween season with witchy tees, studded coats and plenty of skulls.