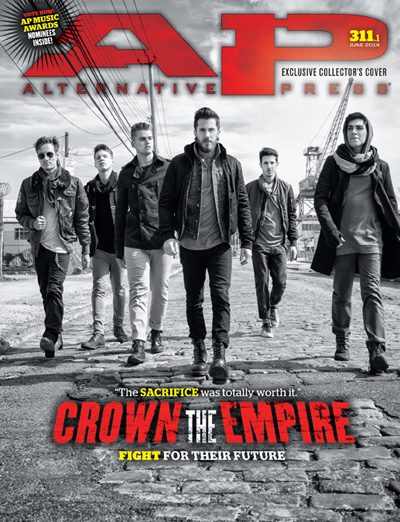 There’s no denying the impact Crown The Empire have had on the scene in their short existence. With their sophomore album on the horizon, we get to the bottom of what makes them tick.

CROWN THE EMPIRE
Written by Mischa Pearlman
Crown The Empire may best be described as “scene contractors” considering the amount of building they do in both their imagined world and the one where the rest of us live. With a brand new album on the horizon, CTE are prepared to create some cutting-edge concepts for their fans to get lost in.

BREATHE CAROLINA
Written by Evan Lucy
Frontman David Schmitt dealt with the exit of his musical foil and the world of major-label politics, only to come out as driven as ever before.

EMMURE
Written by Phil Freeman
From now until the end of his band—or his life—Emmure frontman Frankie Palmeri isn’t apologizing for anything.

BEING AS AN OCEAN
Written by Jesse Richman
The world of faith-based post-hardcore just got a whole lot louder.

LA DISPUTE
Written by Robert Ham
Despite living in various far-off locales, these post-hardcore mavericks are making their most cohesive and engaging music yet. We found out how and why that happened.

MISS MAY I
Written by Ryan J. Downey
Influenced by the comments of their dedicated fans, the Southern Ohio metal contingent built a whole album around their stories.

AP: DIY
Unsigned bands, stories and advice from MANCHESTER ORCHESTRA, WE CAME AS ROMANS and others.

STYLE
Whether you’re into swimming laps, playing Marco Polo or just laying out in the sun, we’ve got a swimsuit for every occasion. All you need is the sunscreen.