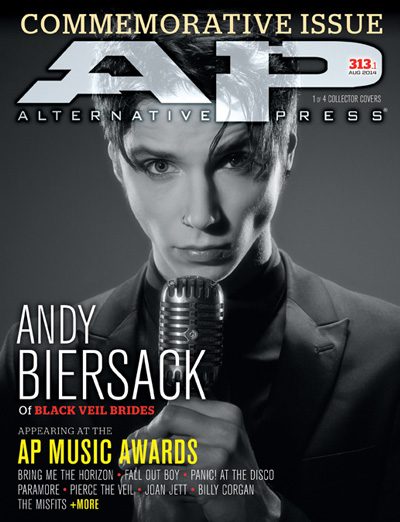 Check out our commemorative issue for the inaugural AP Music Awards, starring members of Black Veil Brides, Bring Me The Horizon, Panic! At The Disco, Fall Out Boy and many more nominees!

On July 21, decibel merchants from the worlds of rock, pop, punk, metal and beyond will converge upon Cleveland for the inaugural AP Music Awards. Consider this issue your guide to all of the greatness being commemorated at the first APMAs.

LETTER FROM THE EDITOR

ARTIST OF THE YEAR

ALBUM OF THE YEAR

SONG OF THE YEAR

STYLE
Whether you’re coming to Cleveland for the APMAs or just need a red-carpet-worthy look for your next date night, we have everything you need for life’s dressier occasions.

PATRICK STUMP
The Fall Out Boy frontman discusses the scene he came up through and where he thinks it’s headed.

ICON AWARD: JOAN JETT
Is the legendary rocker a punk, feminist or music icon? We’ll use all three, thanks.

VANGUARD AWARD: BILLY CORGAN
As the commander of alt-rock flagship Smashing Pumpkins, Billy Corgan etched his name into underground-rock history, and his influence is still being felt today.

MISFITS
The legends of horror-punk continue to kick ass and take names. Because horror is always job one.