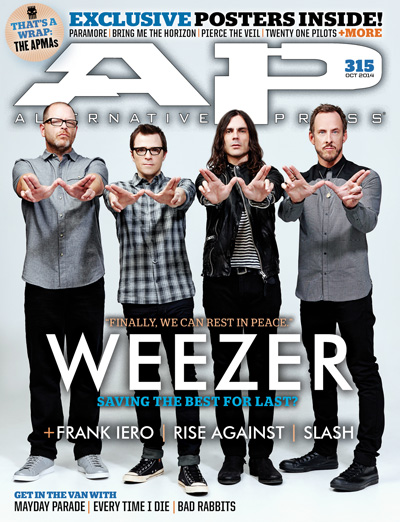 The future of Weezer; the next chapter for Frank Iero; and the road according to Mayday Parade, Every Time I Die and more.

Written by Scott Heisel
Where will this vastly popular, highly influential alt-rock quartet go after making their hotly anticipated return to form? And do they even care?

APMAS WRAP-UP
The biggest event in your favorite magazine's history went down in July. Look here to see who and what you missed.

SKATE4CANCER
Interview by Brittany Moseley
Meet Rob Dyer and the charity supported by his friends in All Time Low.

TOURING ESSENTIALS SPECIAL
We catch up with every member of EVERY TIME I DIE, MAYDAY PARADE and BAD RABBITS to get the lowdown on just what keeps these bands happy on the road—and you won’t believe what they said.

FRANK IERO
Interview by Robert Ham
The former My Chemical Romance guitarist channels his pain and anxiety for your sonic pleasure.

SLASH
Interview by Matt Wardlaw
The guitar icon waxes on playing, his new band and whether there will be rock gods in the future.

RISE AGAINST
Written by Mischa Pearlman
From the outside, the veteran Chicago punks are successful. From the inside, Rise Against feel they still have work to do.

AP: DIY
Unsigned bands, stories and advice from THE FELIX CULPA, THE DOWNTOWN FICTION and others.

STYLE
Autumn is all about change, so take the season to heart and shake up your wardrobe with these not-so-basic basics for fall.

REVIEWS
New releases from SLEEPWAVE, DEATH FROM ABOVE 1979, THE COLOR MORALE, FINCH, HOSTAGE CALM and more.