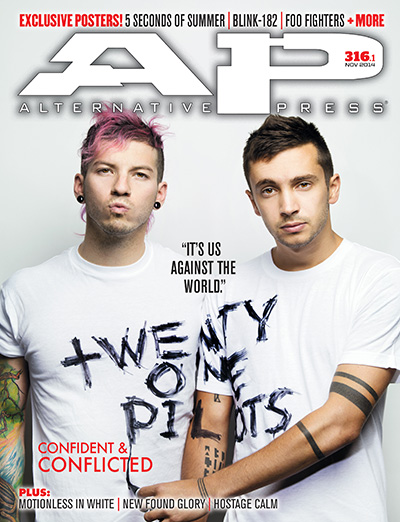 twenty one pilots are cool ’n’ conflicted; New Found Glory strip down; Motionless In White put the world on blast; dying with Hostage Calm and more!

twenty one pilots
Written by Jason Pettigrew
Could America’s next great pop band be two guys from Columbus, Ohio, who veer effortlessly from triumphant to traumatic, sometimes in the same song? Absolutely.

HOSTAGE CALM
Written by Brian Shultz
These Connecticut politi-punks would rather set a personal benchmark than follow anyone else’s standards.

NEW FOUND GLORY
Interview by Scott Heisel
They might have lost a key member, but these pop-punk legends gained direction because of it.

MOTIONLESS IN WHITE
Interview by Ryan J. Downey
The goth-metal attack team’s music will explode your mind, while their frontman will explode all the myths surrounding them.

AP: DIY
Unsigned bands, stories and advice from EMMURE, BLESSTHEFALL and others.

STYLE
We preview the hottest fashions of the season with the help of NEW YEARS DAY in this exclusive pictorial.

REVIEWS
New releases from ANDREW McMAHON IN THE WILDERNESS, OK GO, YELLOWCARD, SLIPKNOT, SET IT OFF, THE ACACIA STRAIN and more.