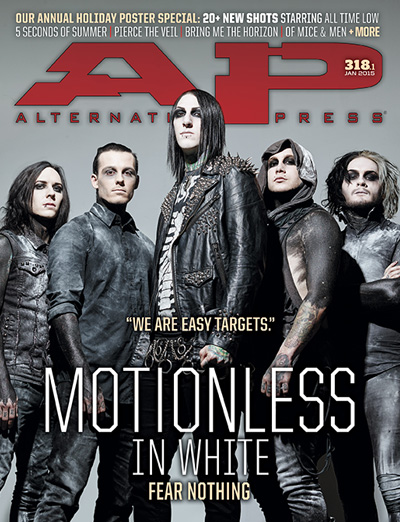 Motionless In White fear nothing; Circa Survive regain control; Angels & Airwaves rebuild the future; Attila get polite (sort of) and more!

America’s premier industri-metal goth-core outfit are self-made men, ready and willing to take both the credit and the blame. Wake up and smell the napalm.

THE YEAR IN PHOTOS
If a picture is worth a thousand words, then this special is worth 20,000 or so. Your bedroom walls can thank us later.

Tom DeLonge has stood on the cutting edge of music and culture for so long, he should’ve cut his toes completely off by now. Instead, he just dreams bigger.

YOU ME AT SIX
Written by Andrew Kelham

Having conquered their homeland, this British pop-punk contingent are eyeing up the colonies. It’s okay, put down your musket…

CIRCA SURVIVE
Written by Tim Karan

It should surprise no one that one of America’s finest bands possess similar levels of both genius and darkness.

AP: DIY
Unsigned bands, stories and advice from NECK DEEP, FINCH and others.