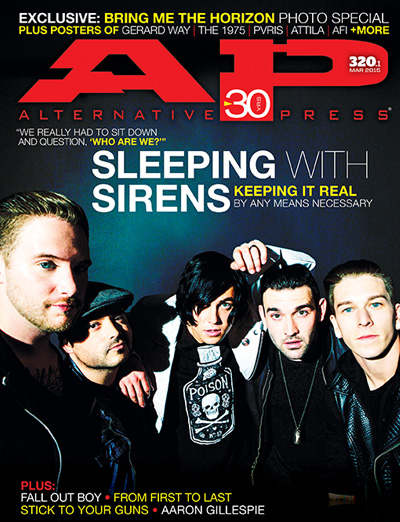 Sleeping With Sirens reboot for brilliance, Fall Out Boy remain legend, Bring Me The Horizon rock Wembley and much more!

The post-hardcore outfit lost a member and went to Nashville to record an entire album—which they scrapped. Yet, despite all the personal, financial and creative struggles, Sleeping With Sirens simply refused to settle.

BRING ME THE HORIZON
Photos by Tom Barnes

Last December, BMTH reached a career high when they sold out London’s Wembley Arena. AP was there to document the big night.

FROM FIRST TO LAST
Interview by Matt Crane

FFTL founder Matt Good explains how the post-hardcore/screamo stylists have returned to deal with unfinished business.

The scene’s jack-of-all-trades has returned with a new faith-based album, a few tales from the road and a new opinion on cursing.

STICK TO YOUR GUNS
Written by Andrew Kelham

Since when is hardcore afraid of politics? In the wake of a tumultuous year for social justice, these California screamers have protest on their mind.

Throughout their storied career, these scene kingpins have been tagged everything from emo to melodic hardcore—when all they’ve ever done is operate on their instincts.

AP: DIY
Unsigned bands, stories and advice from ENTER SHIKARI, TRIPLE B RECORDS and others.