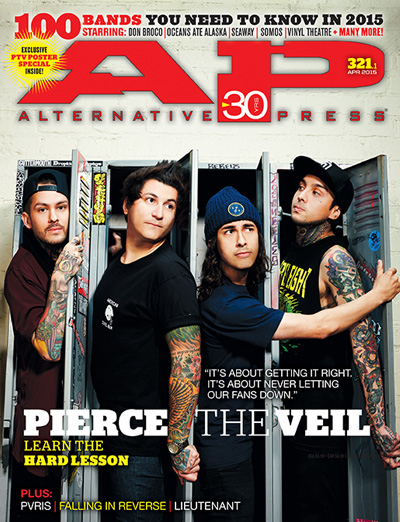 Why can’t Pierce The Veil finish a record? Plus 100 Bands You Need To Know In 2015 starring Chumped, Somos, Oceans Ate Alaska and so much more…

To record Pierce The Veil’s hotly anticipated record, Vic Fuentes retreated to Long Island and moved next door to a cemetery. The surroundings were bleak, pressures were high and cabin fever settled in. But if there’s one thing the members of PTV know, it’s that their singer never rushes anything—even completing a record before a tour begins.

Special: 100 BANDS YOU NEED TO KNOW
It’s our 15th annual guide to the next noise, and we’ve got all the buzz you can handle. From metal to pop-punk to drama-kid-rock (you’ll know it when you hear it), these musicians are poised to blow up in 2015—or at the very least, blow your mind. Check out what CHUMPED, DON BROCO, OCEANS ATE ALASKA, SEAWAY, SOMOS and 95 other artists have to offer both your hard-drive and headspace.

AP: DIY
Stories and advice from THE GUNZ SHOW, MIKE MARQUIS and THE WONDER YEARS.

REVIEWS
New releases from FALLING IN REVERSE, SLEEPING WITH SIRENS, YOU ME AND EVERYONE WE KNOW, LIEUTENANT, DEATH CAB FOR CUTIE and more.