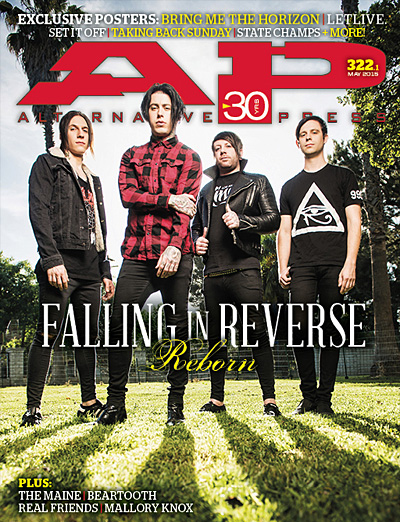 Falling In Reverse survive everything; Beartooth become homewreckers; Real Friends turn down; the Maine get serious; and guitars turn up in our players special.

2014’s biggest comeback came in the form of a self-proclaimed “asshole” whose scrappy candor still manages to charm. Ronnie Radke has risen from the ashes—it’s officially undisputable. But what demons still haunt him and his bandmates?

Special: LIVE TO PLAY, PLAY TO LIVE: AP’S GUITARIST SPECIAL
It’s National Guitarist Month, so get out your axes and noodle it up. Nine of your favorite axmen (and women) from PVRIS, THE 1975, BRING ME THE HORIZON, PIERCE THE VEIL and more spill on their favorite gear, fiercest breakdowns and a few defining performances. Picks at the ready!

BEARTOOTH
Interview by Jonathan Diener
The hardcore rabble from Columbus are taking over the world, touring with Silverstein and unleashing righteous fury on stages across the nation. So why are they booking a house show tour?

THE MAINE
Written by Alyson Stokes
Personal struggles and health scares made for a rough year for the Maine. But with their catchy new album American Candy in stores and a new look on life, things are looking up for these desert wanderers.

REAL FRIENDS
Written by Robert Ham
Pop-punk princes apparent, Real Friends revitalized their genre, and still found time to make a documentary on the side. Kyle Fasel breaks down the basics of bro-time and the importance of band dinners.

MALLORY KNOX
Written by Dan Slessor
Since crossing the Atlantic, Brits Mallory Knox have gained an appreciation for football, sent shout-outs to Hollywood and oh yeah, opened for Pierce The Veil and Sleeping With Sirens’ World Tour. Next on the list: making you a fan.