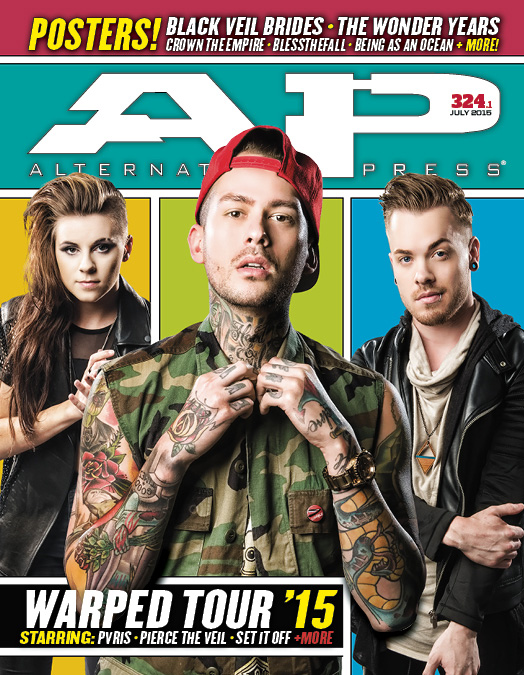 WARPED LINEUP: EDITOR’S PICKS
We scoured the roster and chose our must-sees from this year’s punk-rock summer camp, with an ample dose of pop punk, metalcore and neon rap for every breed of fan.

WARPED: BEYOND THE STAGE
You can navigate the midway blindfolded, but have you ever wondered what goes on beyond the main stages and merch tents? Get an inside peek at Warped’s other wonders, including the ACOUSTIC BASEMENT, COMEDY TENT, WARPED PROM and more.

POP-PUNK ROUNDTABLE
Moderated by Jesse Richman
We’re in the midst of yet another pop-punk heyday, but what’s the state of the scene in 2015? We asked four of the genre’s leaders, FOUR YEAR STRONG, KNUCKLE PUCK, MAN OVERBOARD and NECK DEEP to check its pulse.

THE WONDER YEARS may be the reigning kings of pop punk, but vocalist DAN CAMPBELL isn’t exactly sure what that title entails. In anticipation of their new album this fall—and a very packed Warped schedule for the frontman—Campbell talks genre tropes, Warped traditions and the mystic wisdom of NFL running backs.

MATT SKIBA may be the busiest man in music. A new album with THE SEKRETS and duties with blink-182 might seem overwhelming, but the dark lord of modern punk has some secret weapons—newfound sobriety and unfailing artistic drive.

REVIEWS AND APicks OF THE MONTH
New releases from WE CAME AS ROMANS, NATE RUESS, AUGUST BURNS RED, BETWEEN THE BURIED AND ME, FOUR YEAR STRONG and more.