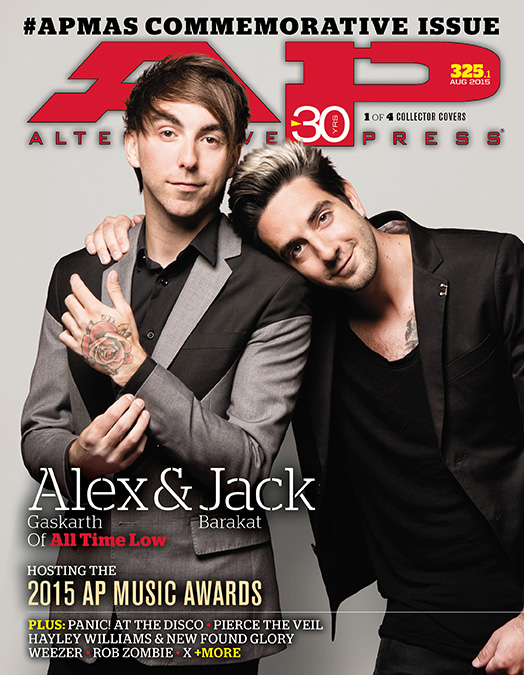 THE ALTERNATIVE PRESS MUSIC AWARDS
On July 22, upstarts and icons alike will converge upon Cleveland for the second annual AP Music Awards, bringing with them enough star power to light the city. Whether you’ll join us in person or in spirit, consider this issue a souvenir.

ARTIST OF THE YEAR
PRESENTED BY MONSTER ENERGY DRINK

ALBUM OF THE YEAR
PRESENTED BY JOURNEYS

SONG OF THE YEAR
PRESENTED BY EPITAPH RECORDS

STYLE
What goes best with an APMA ticket? Some new digs! We run down the freshest duds for the big night.

YOUR HOSTS: ALEX & JACK of ALL TIME LOW
Interview by Evan Lucy

Musicians, comics, flat-ironed men about town: Alex Gaskarth and Jack Barakat can throw a party. So we asked them to host ours. Here, pop punk’s court jesters reveal what tomfoolery lies ahead.

When NEW FOUND GLORY wanted to re-record their sardonic heartwarmer “Vicious Love,” Gilbert enlisted PARAMORE vocalist—and fiancée—Williams for a guest spot. And who better? After all, the song was written about them…

BRENDON URIE of PANIC! AT THE DISCO
Interview by Cassie Whitt

Our reigning Best Vocalist—and Frank Sinatra superfan—is nominated with the rest of Panic! At The Disco for Best Live Band. How is he preparing for the ceremony? Let’s just say gymnastics are involved…

PTV nabbed an impressive number of Skullys at last year’s awards, and the pair are back with nominations for Best Vocalist and Best Guitarist. Now, Tony just needs to get over his stage fright.

10 ESSENTIAL: ALBUM OF THE YEAR TRACKS

If Rob Zombie directed the APMAs, there would probably be murderous clowns and about 1000 more corpses. As it stands, we’ll take our chances just asking the rock visionary where he comes up with this stuff.

• Photo by Frank Gargani
They mixed carnage with rockabilly, had two equally vital lead singers and made the case for punk as an artform. Oh yeah, they’re also one of the few bands with almost 40 years under their belt, and all their original members. X changed what it means to be an icon.