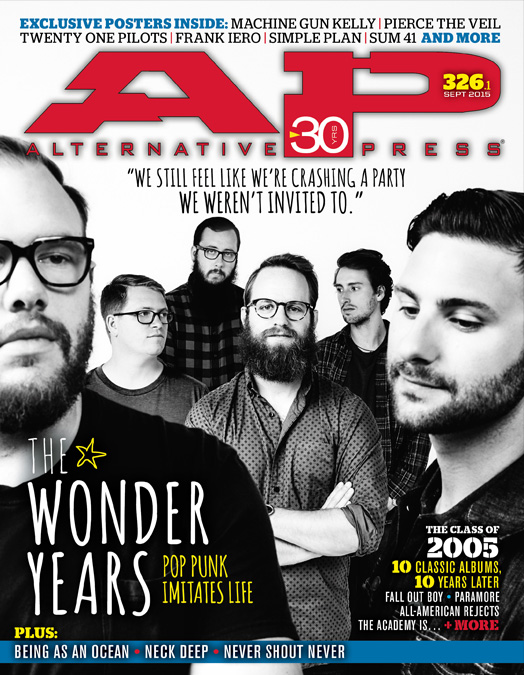 The Wonder Years’ affairs of the heart; Being As An Ocean’s win; Never Shout Never’s new ‘tude; Neck Deep’s next chapter & the Class of 2005

THE WONDER YEARS
Written by Evan Lucy
After the conclusion of their “depression trilogy,” the Wonder Years didn’t know what to write about—they just knew a whole lot of people would be listening. Now the resident pop-punk kings are tackling social injustice, post-rock progression and even the occasional love song. It’s a new era—and still just as wonderful.

CONVERSE’s CHUCK II LAUNCH
They’re some of the most iconic kicks of all time—but who says you can’t play with a classic? AP breaks down the Chuck II’s new features with Converse design director DAMION SILVER, while MODERN BASEBALL, CANDY HEARTS and KNUCKLE PUCK explain why they love Chucks.

BACK-TO-SCHOOL SHOPPING GUIDE
Distract yourself from the end-of-summer blues by perusing the newest offerings from Hot Topic, Journeys and more. For first-day outfit inspiration, look no further than APTV correspondent NICK MAJOR, whose allegiance to skinny jeans will never go out of style.

CLASS OF 2005
Has it been 10 years? We revisit when the scene broke big, looking back on albums from FALL OUT BOY, PANIC! AT THE DISCO, PARAMORE, CIRCA SURVIVE, MOTION CITY SOUNDTRACK and more.

BEING AS AN OCEAN
Written by Ryan J. Downey
The Cali hardcore group make it clear they’re not about pushy proselytizing or the evangelical agenda. (Fact: not all of them are Christian.) Tackling misconceptions head on with their latest album, BAAO explore family traumas, struggles with faith and the wisdom of Mahatma Gandhi.

NECK DEEP
Written by Andrew Kelham
Pop punk’s buzziest underdogs are driven—to conquer stadiums, radio airplay and the entire North American continent. Before they can do that, though, one of the members would like to be old enough to legally drink here.

NEVER SHOUT NEVER
Written by Jesse Richman
Musical shape shifter, occasional recluse, innovative destroyer: Christofer Drew has been many things since blowing up on Myspace at age 16. He’s back with a new focus and his most cohesive release ever.

REVIEWS & APicks OF THE MONTH
New releases from DEFEATER, BULLET FOR MY VALENTINE, LOOMING, TERROR, FRANK TURNER, and more.

AP WORD SEARCH
Can you find the hidden words?