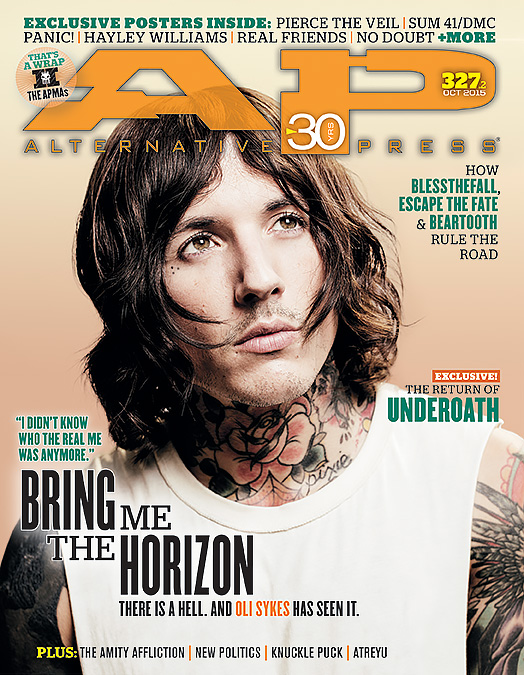 BRING ME THE HORIZON raise the bar; UNDEROATH return; THE AMITY AFFLICTION stay real; KNUCKLE PUCK love their job and so much more!

BRING ME THE HORIZON
Written by Tom Bryant
Few people knew that by 2011, Bring Me The Horizon were on the brink of extinction. The media was hammering down hard and Oli Sykes was wrestling a private addiction to Ketamine. So how is it that, just four years later, the BMTH juggernaut is undeniably poised to take over, well, everything?

Flashback to AP Podcast #33 featuring Bring Me The Horizon!

THAT’S A WRAP: THE 2015 ALTERNATIVE PRESS MUSIC AWARDS
A night of one thousand stars—the kind that come studded, spiked and ready to rock. If you didn’t make it to the APMAs (or even if you did), check out our shots from the show, the RISE RECORDS photo booth and a closer look at Artist Philanthropic Award winner TAKING BACK SUNDAY’s work with cancer initiatives.

STYLE: FUN WITH FLANNEL
Whether you’re a Cobain acolyte or a lumberjack, nothing completes an outfit faster than a cozy flannel. Here are the season’s best selections of the iconic shirt.

AP’s TOURING SPECIAL
Ahh, the lure of the open road—irresistible for the artist. Still, your favorite bands have a few things they must have before hitting the trail. BEARTOOTH, BLESSTHEFALL and ESCAPE THE FATE share their essentials. Spoiler alert: Some reveal their softer side in the process.

ATREYU
Interview by Ryan J. Downey
After a six-year hiatus, these SoCal metal mavericks have returned. Be warned: After taking a melodic detour, the band is back to their original attitude—fast, heavy and pissed.

UNDEROATH
Interview by Tyler Sharp
The reunion metalcore enthusiasts prayed for is finally a reality. Here, AARON GILLESPIE and SPENCER CHAMBERLAIN discuss their reunion tour and the possibility of an actual future.

KNUCKLE PUCK
Written by Maria Sherman
Known for inhabiting the darker end of pop punk’s lyrical spectrum, the Chicago screamers are now feeling exactly what their new album title might suggest: Copacetic. And why shouldn’t they? They’re only winning new fans every night.

THE AMITY AFFLICTION
Written by Andrew Kelham
Australia’s Amity Affliction may be scene titans Down Under, but they’re still climbing the musical ladder in the States. No matter. Vocalist Joel Birch has weathered harder obstacles in the past. Now, he’s just grateful for the music he’s making.

NEW POLITICS
Interview by Dan LeRoy
The closest we’ll get to actual Vikings, these pop-rock Danes have landed on American soil with an eye to conquer. Still, it hasn’t been an easy journey. But now? Well, let’s just say they’ve got a reason to dance.

APCONNECT
Mail, the AP Poll and more.
AP: DIY Stories and advice from MISS MAY I, OUR LAST NIGHT, SET IT OFF, COUNTERPARTS, LONDON REESE and others.

REVIEWS AND APicks OF THE MONTH
New releases from THE WONDER YEARS, BLESSTHEFALL, THE FRONT BOTTOMS, PARKWAY DRIVE and more.

AP FUN TIMES
You can run—but you can’t find.